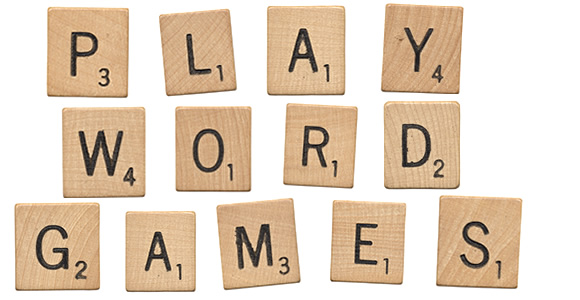 When people walk into my house, the first thing they usually say is: “Gadzooks! You have so many books!”

(Okay, they don’t really say “Gadzooks!”—I’m probably the only one in this hemisphere who uses that expression—but they do show surprise at our overflowing bookshelves. On that note, I suggest a close look at How Many Books Do You Have In Your Home? for research and opinion on why building a good home library is so important.)

The second thing people usually say is: “You have so many games!”

Children love games, of course, and my large collection of games, gathered over the years, is a significant factor in the success I’ve had nurturing the language ability of my students and my kids. And one basic strategy in this area has been the regular use of word games, from an early age, to promote a child’s love of language and bilingual development.

My son, who’s just 6, is already an eager player of word games, and clearly benefits each time from testing and stretching his language ability. For instance, we played Upwords the other day, producing several sequences of rhymes, and these rhyming words heightened his awareness of “word families” and nourished his reading and spelling.

Rather than the usual competitive version of these games, though, we play a cooperative version, such as working together to use all the letter tiles from Bananagrams to form interconnecting words, like a big crossword puzzle, or making a shared list of words when playing Boggle, a word search game.

For younger children, like Roy, this sort of modification—turning a competitive, adult game into a cooperative, child-friendly activity—enables the players to work together on a common goal and interact in a harmonious spirit. As children get older, and grow in both ability and maturity, the competitive version of the game can become more enjoyable. (Though I often still make modifications, such as giving the child two points for every word, while I earn only one.)

Of course, these days many word games can be played on computers, tablets, and other devices, and their use can be beneficial for language exposure and practice. However, I think it’s also true that the child often ends up playing these games alone—not a bad thing—but the experience is hardly as rich or as interactive when compared to playing a word game with a parent or a sibling. (In addition, I suspect that the tactile sense of physical objects—like handling letter tiles—is doing more to stimulate a child’s brain than clicking a mouse or pressing a button.)

For this reason, I recommend collecting actual, physical games—and using them regularly with your children—at the same time you’re putting apps into an iPad.

So if you don’t already have some word games on your shelves, I encourage you to add a few to your Christmas list and begin boosting your children’s language development in playful ways.

Below is a list of 20 word games in English, but many languages will surely have word games of their own. And some of the games on this list, as noted in the brief descriptions, have additional language versions or could be used in any language.

Getting some word games that are expressly designed for kids can be a good way to nurture an early fondness for these types of games. At the same time, games geared for older children and adults can always be modified for younger children with a bit of imagination.

Zingo!
A fun, very tactile, version of bingo, with cards and tiles featuring images and words of common objects. Also available in a bilingual English-Spanish version.

Zingo! Sight Words
Children learn to recognize and read sight words in this step up from the original Zingo. 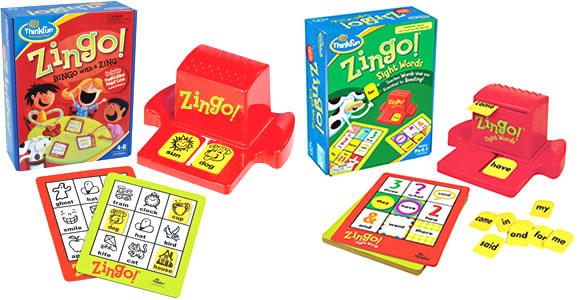 Spot It!
A popular matching game for all ages—with various ways to play—which promotes attention, perception, and speech skills. The cards contain only images, so this game can be played in any language.

Spot It! Basic English
Another good game for emergent readers as children come to recognize and read basic words. Also available in Spanish and French versions. 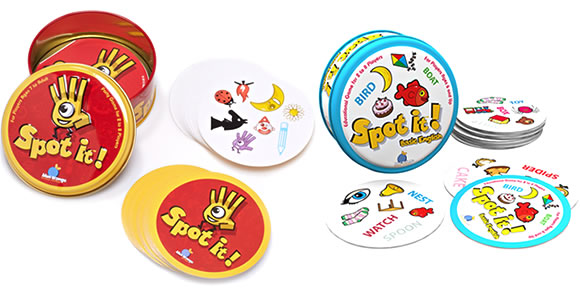 Scrabble
The classic word game, invented in 1938 by an American architect. Today Scrabble is available worldwide in 29 languages. 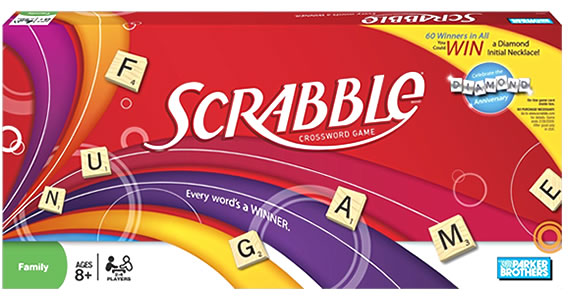 Upwords
A clever variation of Scrabble, where words can be changed by placing letters on top of each other. 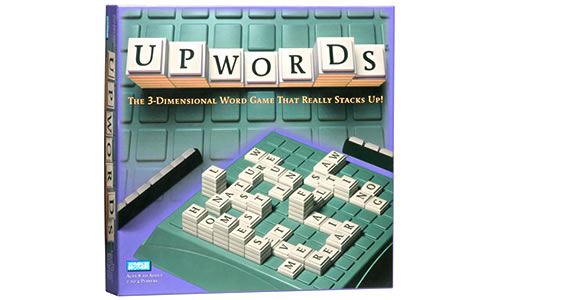 Bananagrams
A fast-paced game where players create grids of words, like crossword puzzles. (For a full post on this game, and information on other language versions, see The Marvelous (and Multilingual) “Bananagrams”.) 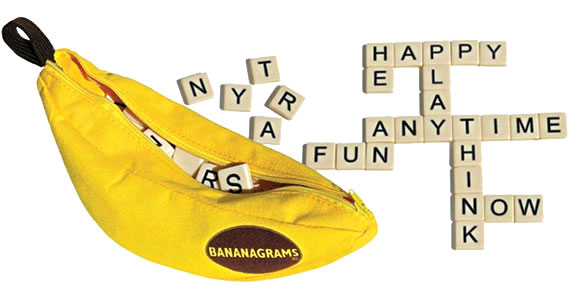 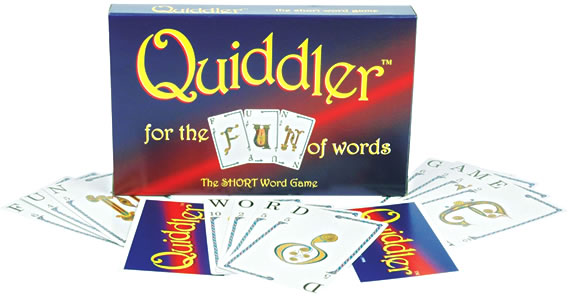 Boggle
A great word search game where words are formed from a grid of 16 lettered dice.

Big Boggle
Like Boggle, but a bigger grid of 25 letters enables players to find more words, and longer words. 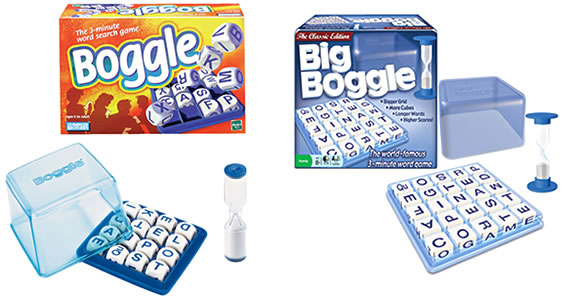 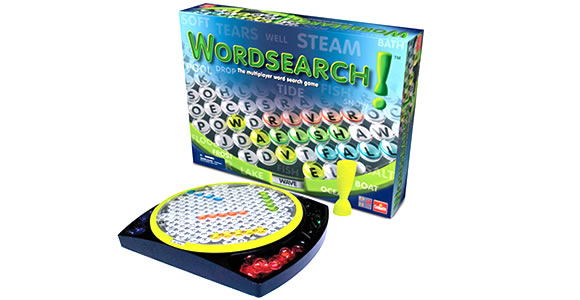 Pathwords
A very clever game which combines word searches with logic puzzles. Pathwords can be played solo, too, at varying levels of difficulty.

Pathwords Junior
A simpler version of Pathwords, but perfect for exercising reading and spelling skills, as well as logical thinking. 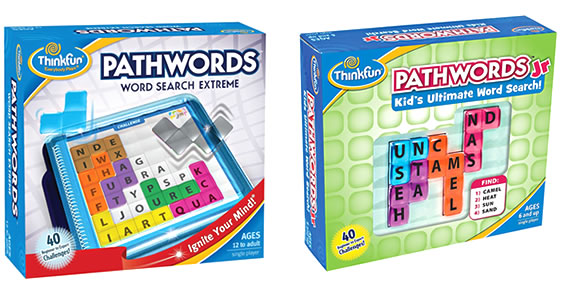 Stare! Junior
Players look closely at a picture card then answer questions about it for points. Good for concentration, reading, and interaction. 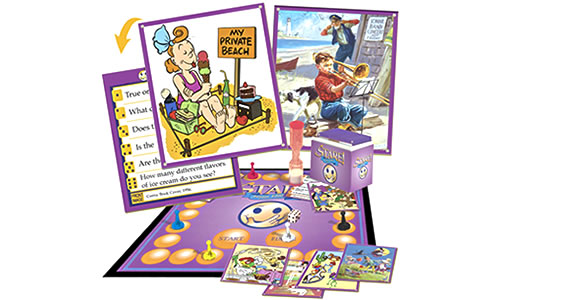 Apples to Apples Junior
A highly interactive game that promotes vocabulary building and reading as players make comparisons between words in creative ways. 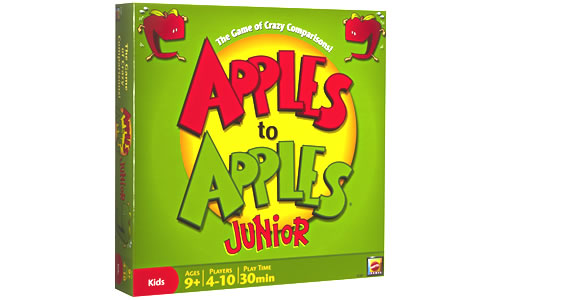 Blurt!
A great game for reading and vocabulary, with varying levels of difficulty, where players must guess the right word in response to a given definition. 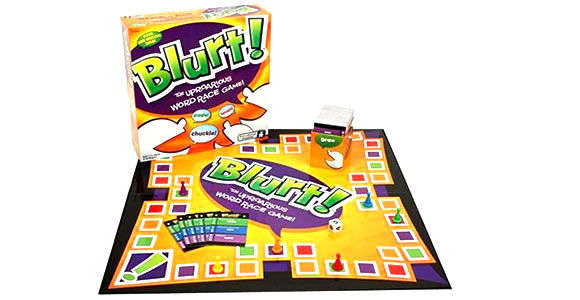 Don’t Say It!
As players try to get one another to correctly guess target words, they exercise verbal ability and vocabulary. 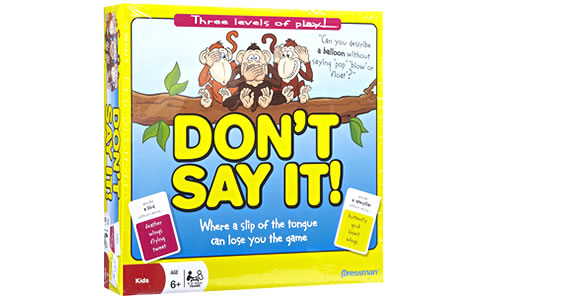 Synonyms
A board game that promotes interaction and builds vocabulary as players name synonyms for given words. 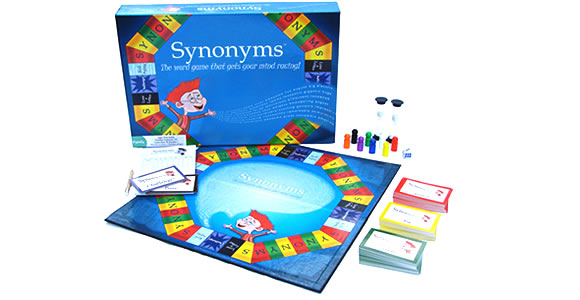 You’ve Been Sentenced!
Players create sentences using word cards in this fun and challenging game which gives language skills and creativity a real work out. 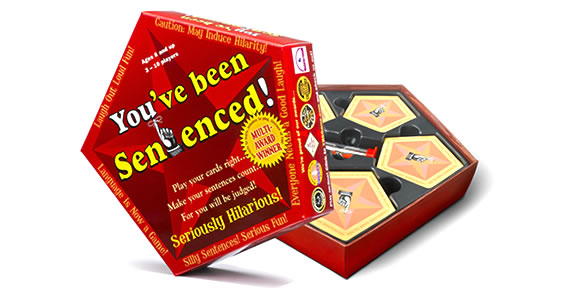 How about you? What word games would you recommend for English or for another language?