When You Screw Up Badly as a Parent

I screwed up badly the other day.

If you’ve been following this blog, you’ll probably recall these two things about my daughter:

One thing I haven’t mentioned yet—and it’s something I’ll eventually devote a whole post to—are my recent efforts to spark a stronger desire to read in both my kids and my students through the use of graphic novels.

The truth is, I feel a kinship with reluctant readers, like Lulu, because I was once one myself. That might come as a surprise, considering I’m now so nutty for books and reading, but in my youth I read very few books at all. In fact, the only thing I would read, really, were comic books.

Those stacks of comic books, though, enabled me to continue reading, and grow as a reader, despite my reluctance to pick up other books. As researcher Stephen Krashen points out in The Power of Reading, “There is evidence that light reading [like comic books] can serve as a conduit to heavier reading. It can help readers not only develop the linguistic competence for harder reading but can also develop an interest in books.”

In my case, this is exactly what happened: Reading comic books during my younger years gradually led to wider, more enthusiastic reading as I got older. (See How Comic Books Can Give Your Kids Bilingual Super Powers for much more on this subject.)

And so, with my own past in mind, I thought I would try providing graphic novels to the reluctant readers I work with, including my own daughter. For Lulu (and Roy, though he’s a more eager reader than his sister), I investigated graphic novels that are geared for elementary school kids, then placed a first order for a handful of titles that I hoped would appeal to them.

One of these books is a spirited science fiction adventure called Zita the Spacegirl. And it was this little book that set in motion my major screw-up.

“I finished the book!” 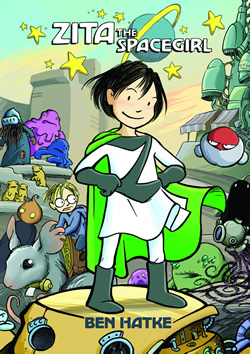 Actually, Zita the Spacegirl was the second graphic novel I gave them. The first one, which I thought would be an easier introduction to the genre, was a simple story about a bird and a squirrel entitled, well, Bird & Squirrel, and I was happy to see Lulu and Roy each read the whole book in one sitting.

But Zita the Spacegirl is a more complex story, with more difficult text. Could they really follow it, and read it?

On Saturday afternoon I showed Lulu the book. “It’s an exciting story,” I told her. “It’s about a girl’s adventure.”

To be honest, I half-expected her to just glance at the cover and skip away, but she took it from my hand and curled right up in the chair in my office. Pleased at this show of interest, I turned back to my computer to resume my own work.

The next hour passed in silence as she quietly pawed the pages. Then, much sooner than I imagined possible, she sprang from the chair and chirped with a proud, happy grin, “I finished the book!”

After all, the whole point of getting these graphic novels was to motivate her to read with greater interest, and that’s apparently what had just happened.

But no, my reaction was very different. Oh, it’s true, I was exhausted from a long day, but that’s no excuse for the fact that I responded in a way that was not only unkind, it was utterly counterproductive to my aim.

“You couldn’t have read the whole book that quickly!” I snapped.

Lulu’s beaming face fell instantly and she burst into tears.

“I did!” she protested. “I really did!” And she flew from the room to seek comfort from my wife.

For the next 10 minutes I sat there shaking my head. Bad Daddy. Bad, bad Daddy.

Meanwhile, Lulu was in the kitchen, determined to convince Keiko that she was telling the truth by recounting the story to her in Japanese.

Finally, flushed with victory after proving her case to Keiko, she strode back into my office. “Mommy believes me!” she declared with some defiance.

“Lulu, come here,” I said softly. She may be nearly 9, but she’s a small girl and still fits easily on my lap. “I’m sorry. I didn’t think you could read it that fast. Could you tell me the story in English?”

And she did, even explaining the whole complicated tale better than I could myself.

Actions that support your aims

What’s the lesson here? (I mean, apart from apologizing to your kids when you mess up!)

When it comes to your aims for your children’s language development, be very careful that you’re not somehow undermining your own objectives through the actions you take.

My blundering response to my daughter illustrates this point clearly. In fact, it’s almost comical how wrongheaded this knee-jerk reaction was when compared with my goal. Fortunately, I don’t think this particular mistake will cause any lasting harm to my aim or (more importantly) the bond with my child.

Other actions, though, can have more far-reaching consequences. I discuss this more fully in Are You Accidentally Hindering Your Child’s Bilingual Progress?, but one example would be electronic gadgets. Because giving children such gadgets in the majority language can end up strengthening that language at the expense of the minority language, it could be wiser to inhibit their use in your home and instead provide similar devices in the minority tongue.

As parents of bilingual children, our task is to stay awake to our greater goals and take actions that will best support those aims. We all screw up from time to time (particularly when our energy is low), but we have to allow for that, give ourselves a little grace when mistakes occur, then plod onward for another day.

I know our kids might find this hard to believe, but their parents are human, too!

How about you? How have you messed up with your own kids? What did you learn from it?

PrevPreviousFree Report: The Power of Reading in Raising a Bilingual Child
NextHas This Blog Been Helpful to Your Family? Here’s a Chance to Help Mine!Next