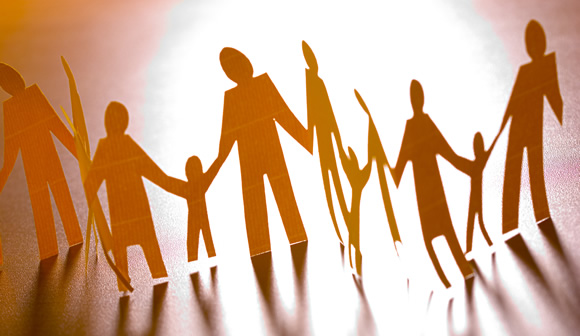 Even with the solid support of family members and friends, the bilingual journey can be a tremendous challenge for the minority language parent, both physically and emotionally. Not only does supporting the minority language require daily doses of physical energy, there are often ongoing concerns about language development—and quiet feelings of loneliness—that test the parent’s emotional strength.

And it all becomes tougher still—sometimes much, much tougher—when you feel a lack of support from the people around you.

Now and again, I hear from people who are struggling with this very scenario: a spouse, a relative, or a friend who shows little support—even open disapproval—for the efforts being made by the minority language parent to hand down the mother tongue. The circumstances naturally differ in each case, but the basic dilemma is the same:

How do I handle this lack of support in a way that enables me to overcome the frustration I feel and continue to effectively support the minority language?

This question, of course, has no universal answer. After all, the underlying reasons for this lack of support will always be unique to the circumstances, and so an effective response must fit the specific situation and individuals involved.

That said, I do think we can be helpful to one another by sharing our personal experiences and our thoughts on the subject. In this way, we can consider the problem from a variety of perspectives, which might provide ideas and inspiration for successfully addressing our own difficulties. And if this is a challenge you’re facing now, putting it into words may help clarify the problem, and replies from others could point you toward potential solutions.

To get the ball rolling, I’ll share my personal perspective below. Then it’s your turn. My hope is that a good number of comments (as in the outpouring of comments to What Language Should I Speak in Public with My Bilingual Child?) will benefit us all as we navigate what can be rough bumps on our bilingual journey.

While there may be a range of reasons for a lack of support, I suspect that, in many cases, a large part of this stems from the fact that the person is unable to see the value of the child acquiring the minority language and becoming bilingual.

In my situation, because English is our minority language and we live in Japan, where English ability is prized, this has been a definite advantage when it comes to others’ perceptions of my efforts to hand down this language to my children. I recognize the good fortune in this, and I realize, too, that there are other minority languages which don’t share this same advantage. In fact, quite the opposite may be true: the perceived “lack of value” of a minority language can lie at the very core of this problem of lack of support.

First, let me say this, loud and clear: Whatever your minority language, if it has value to you, it has value. Period. No one should ever have to defend the value of handing down their mother tongue to their own children if they feel, personally, that it has value within the family.

Even if my mother tongue was Martian, you can bet that I would still be just as persistent about fostering Martian in my kids, because this language would be at the heart of who I am and they simply couldn’t know my soul if they didn’t know that language. (For a fuller discussion of this, see Why Communicating in English with My Kids is So Important to Me.)

At the same time, helping others see the more tangible value in a minority language where this value is harder to quickly grasp—beyond its intrinsic spiritual value to the parent-child bond—can raise their awareness and refresh their attitude toward your efforts.

How? Here are three ideas…

1. The value of bilingual ability in general
There is now ample scientific evidence that being bilingual has a very positive impact on the brain, throughout a human life. Not only does ability in multiple languages strengthen the mind during childhood, this effect apparently lasts into old age, helping to stave off mental decline by several years. Simply put, bilingual ability—whatever the minority language might be—is exceedingly good for a child’s brain.

2. The value of bilingual ability to the child’s life
Depending on the particular minority language, it may be difficult to say, here in the present, how this language will be of value in the farther future, professionally or socially. But I would be willing to bet that ability in any minority language in this day and age (even Martian) will add value and advantages to the child’s life, on into adulthood. The world has become so small, so interconnected, that bilingual ability can’t help but enrich a person’s lifetime.

3. The value of the child’s bilingual ability to others’ lives
In A Powerful Way to Inspire a Positive Attitude in Your Bilingual Child, I discuss the idea that finding opportunities for the child to be helpful to others through the use of the minority language can be a very potent way for him to feel the value of this ability. At the same time, such opportunities could also demonstrate this value to the people around you. The challenge is: What opportunities can you find, or create, so that your child could somehow help others by using his bilingual ability?

While there may be other factors involved in someone’s lack of support, much of the problem could simply be that this person doesn’t yet understand the true value of bilingual ability and the minority language. If that’s the case, what is needed is not blame, but education: by patiently educating the person—by communicating, and demonstrating, the value of the minority language in the ways described—you will hopefully move their mindset in a more positive direction.

Ideally, of course, the goal is to gain the active support of such people, but even their “passive support” would be far better than the obstruction they may be causing now. At least with “passive support” (which would basically describe the situation with my dear wife), you will be free to continue your efforts without the frustrations of their interference.

You are not alone

Finally, remember—always remember—You Are Not Alone.

In fact, you can find warm, sympathetic support at The Bilingual Zoo, my lively forum for “keepers” of bilingual kids. There are hundreds of other parents in this community, providing mutual encouragement for raising bilingual children, and you would be welcome to join us…

How about you? Could you contribute to this discussion with a personal experience or some advice?

PrevPreviousWhat Do You Think of Bilingual Monkeys? Share Your Feedback and Win a Prize!
NextThe Power of Using the Minority Language to Help OthersNext