What Happened to My New Book Featuring the Success Stories of Bilingual and Multilingual Families? 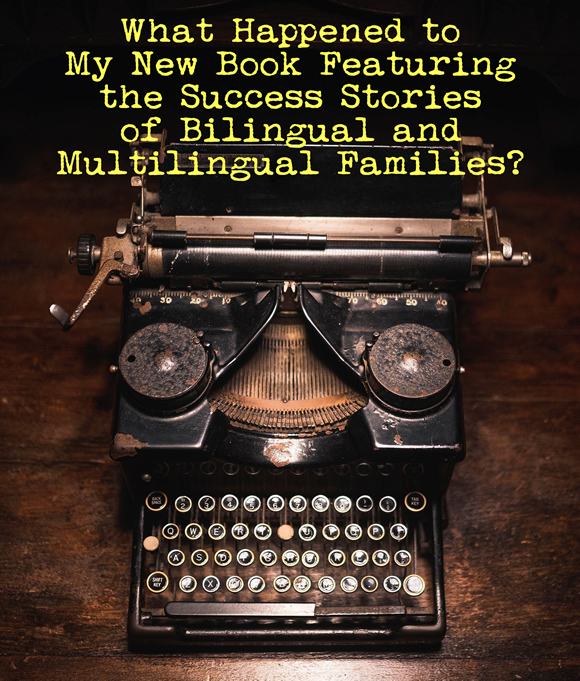 Exactly a year ago I was in Europe, traveling to nine countries and staying with 10 families. It was a fantastic trip, lasting nearly six weeks, and I was able to interview 15 parents for a new book I’m writing that features the “success stories” of bilingual and multilingual families.

If you missed the posts I made about my trip when they first appeared, here’s the first one, which includes the links to the four posts that followed…

After I returned to Japan, I then interviewed roughly 20 more parents in other parts of the world, via Skype. This interviewing was mostly completed by the end of last year (a few more interviews have taken place since then). In January I then began the process of transcribing the interviews and, based on the transcripts, writing the stories of the individual families.

This process is simple to describe, but it’s been extremely time-consuming in practice. In fact, after I transcribed the first few interviews myself—each hour-long interview produces a transcript of 15~20 pages—it became very clear that I’d fall far behind in the actual writing if I continued trying to create the transcripts, too. So, after a few failed attempts at using automated transcription services that are available online, I hired someone to do the transcription work for me so I could start writing at a better pace.

Let me pause here to make a loud shout-out to all those who have lent their support, through Patreon, to cover a very helpful percentage of my expenses related to this book project. I’m very grateful to you!

To be honest, my original timeline for the project turned out to be overly optimistic. This is true not only because the work has been more demanding than I expected, but also because the consequences of the pandemic upended the steady writing routine I established earlier in the year.

Still, I’ve managed to persist past these challenges and the other day I compiled the 22 stories I’ve written so far—each one is 2,000 to 3,000 words long—into the first draft of the full manuscript. Ultimately, the book will probably contain 25 stories, along with additional content in the front and back, which means it will be well over 60,000 words in total. As this is a reasonable length for the book, I’m afraid it won’t be possible to include the story of every family I interviewed, as much as I’d like to. Hopefully the stories of these other families can be shared in a sequel or in some other way.

With the first manuscript in hand, I can now finally see a ray of light at the end of this long tunnel. Assuming the process can continue fairly smoothly from here, the revised timeline for the finished book now looks like this…

*In September and October, I’ll revise the stories with an eye toward strengthening them and unifying them in certain ways. I’ll also try to finish the final few stories that haven’t yet been written.

*By the end of October, I’ll email everyone who has taken part in this project. For those whose stories will be included in the book, I’ll ask them to read through their family’s story for their feedback. So hopefully by the end of November, all the individual family stories will be finalized, for the most part, and approved by the parents.

*In December and January, I’ll bring all the stories together and write additional material for the front and back parts of the book. By the end of January, then, I should have the full and “final” manuscript for both participating parents and early readers (like Patreon supporters) to look at.

*By the end of February I’ll hopefully have received feedback on the “final” manuscript and I can then strengthen the book further, as needed, through the month of March. Meanwhile, I’ll also be moving forward with the work to produce the actual book, like laying out the text of the book and creating the cover image.

*And finally, in April (or at least May), the finished book can be published and shared worldwide.

While I regret that this project has taken a little longer than I had envisioned at the start, it’s nevertheless true that I’ve continued to plod forward from day to day, knowing—like the bilingual journey itself—that I simply needed to persevere in order to eventually achieve my larger aim. (But that’s the thing about these larger aims in life, right? As long as we persevere in our efforts, we will make gradual progress and ultimately fulfill our longer-term goal.)

And I hope you’ll agree, once you see the completed book, that it was worth the wait. Although it isn’t finished yet, the stories themselves are so engaging and so encouraging, I expect many parents will find the book to be a valuable source of information and inspiration for their own bilingual or multilingual journey.

Please wish me luck as I continue plodding forward toward the finish line!

PrevPreviousMy Bilingual Kids Are Now Teens and This Is the Key to Our Success
NextGuest Post: My Son Is a Language Superhero, Even If He Doesn’t Know It YetNext