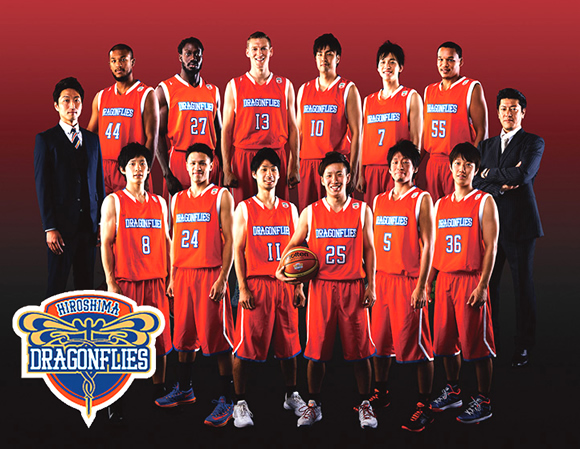 Two years ago, a professional basketball team was born in Hiroshima: the Hiroshima Dragonflies. They aren’t the best team in the Japanese National Basketball League, but we enjoy watching their games from time to time at the local sports center.

The other day we saw an exciting game (which they lost 86 to 85!), and came away impressed with one of the players in particular: Not only is he a great player, he also has a great name!

Shannon Shorter. (Every team in the Japanese National Basketball League has a few international players, and Shannon Shorter is from the United States.)

Now I’m not making light of his name, not at all. It’s just that, as a bit of language, with the “Sh” alliteration and balance of two syllables in each word, this name is very appealing and great fun to say.

Go ahead, say it with me: Shannon Shorter.

No, I mean out loud. Once more now: Shannon Shorter.

So there I was, the day after the game, playing basketball with my newly nine-year-old son. Since we live on a small, quiet street, with very little traffic, I simply park a short, free-standing basket in the middle of the road, and that’s where we play. I’m not very tall—and couldn’t come close to dunking the ball on a real basket—but I can happily pretend I’m a giant when I dunk over Roy’s head on this one.

“Shannon Shorter!” I cried, slashing toward the basket.

I paused. “Okay, you can be Shannon Shorter,” I said.

Then I grinned and shouted: “I’m Terry Taller!” And I dunked over his head again.

We spent the next 20 minutes playing basketball and laughing as we brainstormed a whole team of players with fun names that followed the same sort of equation:

In addition to Shannon Shorter and Terry Taller, here are the other players that made the cut for our team, artistically presented by Roy… 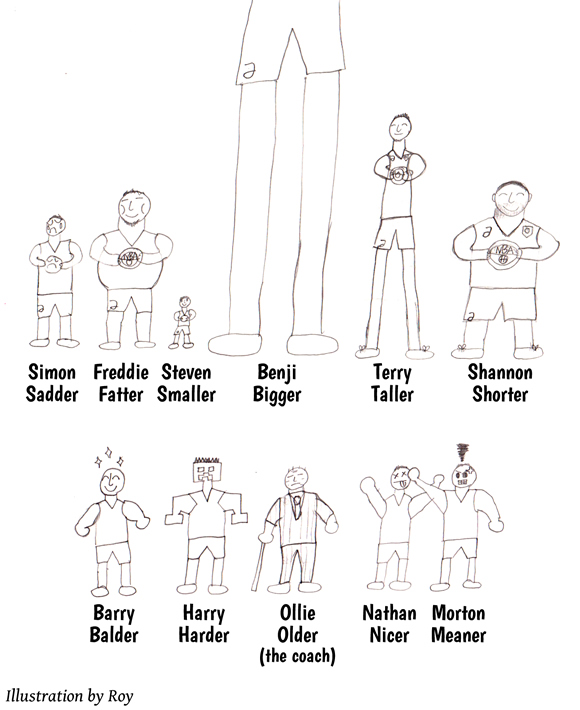 I tell you this little story to make a large point:

The more playful you are with your target language—the more you make a habit of milking fun from the sounds and meanings of this language on a regular basis—the more you will positively impact not only your child’s ability in the language but also his attitude toward it.

How? By making an effort to not only capitalize on the potential language fun of daily life (code word for this: “Shannon Shorter”), but by also consciously engaging in activities charged with this spirit of language play, like…

To observe this spirit of language play in action, see the three videotaped interviews my kids and I made…

VIDEO: With Bilingual Kids, There’s a Madness to My Method (interview with Roy)

The takeaway today: A penchant for language play is hugely rewarding, making your efforts to nurture the target language more productive and more enjoyable. By mindfully milking this lighter side of language exposure, on a daily basis, you not only strengthen the child’s engagement and development, you deepen his positive feelings for the language itself, which lies at the heart of organic interest and enduring growth over the years ahead.

Again, say it with me: Shannon Shorter.

[stextbox id=”comments”]How about you? In what ways do you and your children engage in language play? Is there more that you can do?[/stextbox]