Venomous Snakes and the Bilingual Child 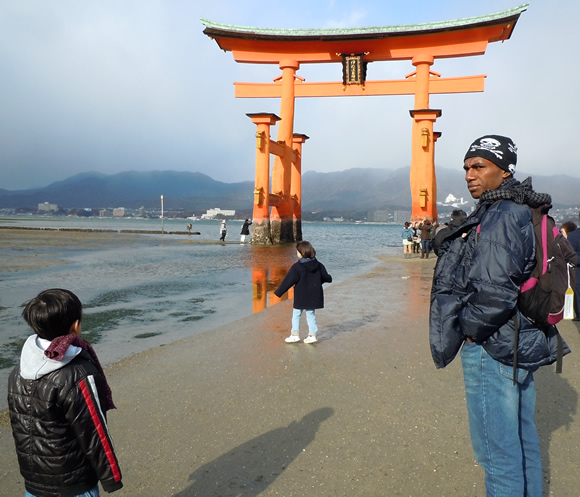 Not long ago, I shared the idea of serving as a host family for a homestay guest able to speak the minority language in order to help instill the value of this language in the child’s head and heart. You might want to arm yourself with that article, Getting a Bilingual Child to Feel the Value of the Minority Language, before venturing into this post where poisonous snakes lie in wait.

Over the weekend, we hosted another international visitor, this time a young man from Papua New Guinea. His name is Gibson and he’s 21, a university student with a remarkable story.

He came to Japan as part of a Japanese government program which hopes to show the world that Japan is still a safe place to visit following the nuclear accident of March 2011. In fact, because the government is covering the expenses of every participant from abroad—making these two-week tours completely free—there has understandably been a flood of applications in each nation being offered this opportunity.

In Gibson’s case, there were over 1,000 applicants—a process that included a personal essay and an interview—and he became one of only a dozen participants from Papua New Guinea.

To be honest, I knew very little about Papua New Guinea before we met Gibson. One weekend, of course, hasn’t made me an anthropologist, but I have gained a more realistic sense of the way of life—and the challenges—that the people there face. (Headhunters will no longer be the first thing that springs to mind!)

For example, let me tell you Gibson’s story. And as you’ll see, it offers a moral for us all, no matter our ambitions in life—and that includes the desire to raise bilingual children.

Like many of the people in Papua New Guinea, Gibson grew up in a rural village amid lush wilderness, a place without the “necessities” that we often take for granted, such as electricity, television, and indoor plumbing. Most of the residents there don’t have modern-day “jobs.” Instead, they live lives of subsistence: growing vegetables and fruits, fishing in rivers, hunting in forests. (Gibson himself has killed his share of wild pigs with a sharp spear.)

A striking example of this isolation from the larger world is the fact that he hadn’t heard of Mickey Mouse until he watched TV at our house with Lulu and Roy.

The quest for education

When Gibson became old enough to attend school, he and about 20 little companions from his village set off for the first grade at the nearest primary school—three hours away on foot.

Yes, you read that right: three hours there, three hours back. And much of that hike was through thick jungle.

Gibson would wake up at 4 a.m., leave the house by 5, and arrive at school at 8. Returning home for dinner, he would then study by candlelight until it was time for bed.

He would do this again the next day, and the next, week after week, month after month, year after year.

By the time he entered eighth grade—the last grade at that school—the arduous trek for education had taken its toll on the other children. His original 20 companions had now dwindled to just one other child. The rest would pursue lives of subsistence back in the village.

Gibson’s reward for persevering to the eighth grade? One day—a day he happened to head to school alone—he was hiking through the jungle when a large dark snake flashed out and bit him on the leg. It was a Papuan black snake, highly venomous and often deadly. (He showed us the nasty scars.)

The stricken boy somehow staggered home, fighting to stay on his feet (apparently, the poison is neurotoxic, causing muscle weakness and paralysis), returning to his family hours later. His parents, weeping over him, believed he would die, as a considerable number do each year from snakebite in Papua New Guinea. (Doses of antivenom are expensive and not widely available.)

Gibson fell unconscious, but awoke a day later: he had survived. He went on to complete his eighth grade year, then receive scholarships to high school and college, where he could live close by in a school dormitory.

Today, he has become one of Papua New Guinea’s top students in mathematics (winning trophies for his efforts) and hopes to pursue a Masters and Ph.D. in climate science after he graduates from college next year.

Tromping six hours a day to attend school as a child, Gibson has clearly been determined all along. And yet, he says, surviving the snakebite, when many others have died, has made him even more determined to succeed. He believes he survived for a reason, and that his life has a larger purpose.

In How Much Passion Do You Have For Raising a Bilingual Child?, I discussed the central role of passion in any long-term pursuit. At the same time, perhaps lying even more deeply in the soul, is determination itself. Whatever ambitions we have for our lives—whether gaining an education against incredible odds or raising a bilingual child in challenging circumstances—determination is at the very heart of our daily progress, and our ultimate success.

From now on, when I’m feeling weary in this or any other quest, I’ll just think of Gibson on his long walk to school, striding past those venomous snakes toward bigger dreams.

[stextbox id=”comments”] How about you? What do you think of Gibson’s story? What helps keep your determination strong when it comes to raising bilingual children?[/stextbox]

PrevPreviousChristmas Giveaway at Bilingual Monkeys!
Next“I’m Not Ready To Die” (Art Party 2012)Next