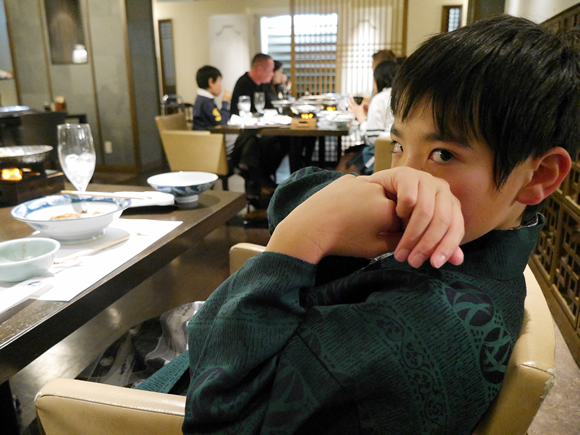 It’s been a while since I simply shared news of my family’s own bilingual journey. Despite the heartache of this year for me, I’ve tried to keep up my regular efforts to nurture my children’s progress in our two minority languages, English and Spanish. In this two-part series, I offer updates on the bilingual lives of my daughter (here) and now my son.

Lately I’ve been sifting through big boxes of old photos: me as a child, my parents and my siblings, my years as a young adult, my time in Japan, and my kids when they were small. In fact, I’m slowly putting together two plastic tubs—one for Lulu and one for Roy—that will contain an organized collection of their family history on my side, with photos, videos, audio CDs, letters, newspaper articles, and other documents.

The truth is, since they’ve lived in Japan all their lives and have made only a couple of short trips to the United States, their connection to my history, and my family’s history, is pretty thin. I continue to try sharing this history, as I’m able, but I know it feels distant to them, particularly now that they’ve become so immersed in their Japanese lives.

I guess these plastic tubs are my attempt to leave them with this legacy when they’re older, even after I’m gone. Perhaps they’ll spend time with the contents one day and come to feel a stronger connection to these roots; perhaps not. But it’s what I can do.

So this week I was looking through photos of Lulu and Roy when they were just babies. I was sitting on the floor of the living room as they were perched on the couch, watching TV. Occasionally I would flash a funny photo their way, like this one…

They would glance over and laugh, then flick their eyes back to the TV screen. And as my gaze lingered on them—Lulu at 14.5 years and Roy at 11.9 years—I couldn’t square the fact that these strange babies in the photos have somehow become the odd young people sitting there on the couch.

In Japan, elementary school runs from first to sixth grade—as was the case when I was a child in America. Roy, now, is in sixth grade, which means that next spring, when the new school year begins in Japan, he will join Lulu at our local junior high school.

While it’s true that Roy’s upbringing has been far different from my own, in terms of circumstances, he still reminds me of myself as a boy in some basic ways…

*He has a shy exterior that hides a very playful, very humorous nature.

*He has a sensitive spirit, which can bruise badly at times.

*He loves to draw.

His drawing, though, also reveals an important difference between us at that age, a difference that has also impacted his bilingual development in powerful and productive ways.

From early on, it was apparent that Roy had the ability, when truly engaged in a task, to focus his attention very keenly and for lengthy periods of time. The best example of this are the times he draws a sports figure—often a favorite soccer player—in free hand as he studies a photo of that person in a magazine or from a computer print-out. He can stick with this task for hours, drawing and erasing and redrawing, until he’s satisfied with the accuracy and precision of his work.

Here’s one of his drawings, from last December, at age 10.9… 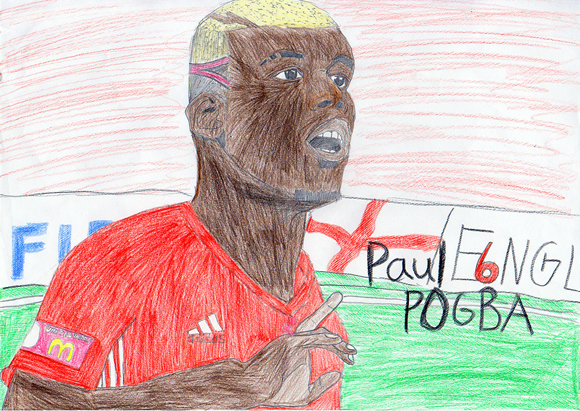 Beyond the awards he’s earned in various art contests while in elementary school, this capacity to concentrate has also enabled him to spend significant amounts of quiet time with books and magazines, in both languages. And this, as I detailed earlier in a post that compared their language development, has helped fuel his strong progress in English literacy as well. Of course, my ongoing efforts to supply appealing books and other reading materials, and maintain a long-running routine of daily homework tasks, has been essential to his language development over the years. But the fact remains that his very nature has been the powerful engine for achieving a level of English ability that I think rivals my own at that age, even though I was a monolingual child. (I was stunned, frankly, that he was able to read the entire Lord of the Rings trilogy this year, which I also read at around the same age.)

At this point, the only thing holding Roy back from reaching even higher levels of ability in English is basically his young age: he hasn’t really lived long enough to acquire a wider breadth of knowledge about the world and, naturally, without this background knowledge, it can be hard for him to grasp the details and meanings of more sophisticated texts. But I’ll continue challenging him to stretch himself, and, with time and maturity (and hopefully some academic opportunities, too, in this language), I expect that his English level will continue to rise higher.

At the same time—as I mentioned previously with Lulu—I’ll do what I can to fuel his development in Spanish, too, through regular lessons with a Spanish speaker and daily bits of homework. He clearly has a good ear for the language and my hope is that his ability will eventually grow more active when Spanish can somehow become a larger part of his life.

Let me underscore, though, the message that I made in my update about Lulu:

As my kids are growing into their teenage years, and they’re coming to lead busier, more independent lives, I’m finding it increasingly difficult to spend the kind of substantial amounts of time with them that I used to when they were younger. And this means that my influence as the main source of minority language exposure is diminishing. Depending on your circumstances as a family, you may not experience this struggle to the same degree. But I urge you to project ahead to this possibility and be as proactive as you can, while your kids are still small and your influence is still large, to spend ample time with them and provide them with ample input in the target language in order to nurture a firm and active foundation in this language by the time they enter junior high (not to mention cultivating a close parent-child bond).

In my case, I’m now relieved that this has been largely achieved and that their language ability can now also be advanced through books and other means that don’t necessarily require my presence.

Read more of my posts about Roy…

My Bilingual Daughter Is 13. My Bilingual Son is 10. So Why Is Their Level in the Minority Language Basically the Same? (age 10.10 )

VIDEO: With Bilingual Kids, There’s a Madness to My Method (age 7.10)

My Son Disappears, I Lose My Mind, and the World is Beautiful (age 6.7)

How I Get My Bilingual Son to Talk His Head Off in the Minority Language (age 6.7)

“It’s a Little Bit Funky”: I Interview My Son on Being Bilingual (age 6.0)

And see the many questions from readers posed to Lulu and Roy at The Bilingual Zoo, along with their personal responses…

Talk to the Monkeys! (board at The Bilingual Zoo forum)