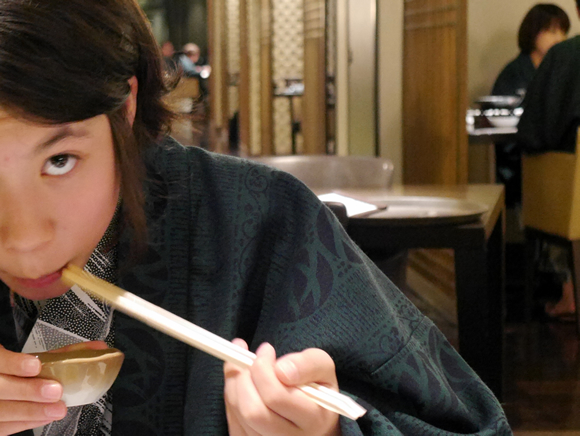 It’s been a while since I simply shared news of my family’s own bilingual journey. Despite the heartache of this year for me, I’ve tried to keep up my regular efforts to nurture my children’s progress in our two minority languages, English and Spanish. In this two-part series, I offer updates on the bilingual lives of my daughter and my son. First Lulu, then Roy (here).

High school on the horizon

Lulu is now 14.5 years old, a mostly upbeat young woman. Incredibly (at least to me), she’ll start her last year of junior high school next April, which means that she’s already begun the taxing process of getting into the high school of her choice. This involves studying a lot harder than I ever did as a young teen; attending a “cram school” several evenings a week to strengthen the subjects she struggles with most (like her numbers-challenged father, math is not her forte); and, eventually, taking an entrance exam for her chosen high school (as well as a back-up school or two).

At this point, she hopes to get into one of the most competitive high schools in Hiroshima, which offers an international studies program. Her chances are good, I think—and her English ability is a valuable factor on her side—but only time will tell if this aim can be fulfilled.

While it’s true that this process is forcing her to become more disciplined (I’m amazed, frankly, at how long she can study when she’s facing a week of tests at school), it’s a rather stressful experience, too, and I’m afraid her time and energy for our minority languages—not to mention other interests and pure fun—is being squeezed badly.

Still, on most days, she continues to complete the modest amount of homework that I give her in English and Spanish—a routine (starting with English) that began over a decade ago. (See Secrets of a Successful Homework Routine, Part 1.) And I remain mindful, too, of the importance of spending time with her—for the sake of our relationship as well as her English ability—and so I’m trying to make this an ongoing priority. (Lulu is a sporty girl and I’ve found that playing catch in front of the house is a good way to engage with her for short bursts of time.)

While I’m generally pleased with her level of English ability, it’s also true that her lack of time for reading and (especially) writing in English means that her progress in these areas is slower than I would prefer. But, considering that she’s always attended Japanese schools, her foundation for further growth into more advanced levels of literacy is now firm.

Tears at the kitchen table

On the subject of reading, I continue to read aloud to both kids at breakfast each morning. Actually, because they’re still attending different schools, and Lulu has to get up earlier than Roy to make the farther trek to the junior high, I need to read to them at separate times: 20 minutes of one book with Lulu, then 20 minutes of another book with Roy. (Next year, when they’re both at the same school, I’ll again be able to read to them together…at least for that year.)

I’ve mentioned this before, but when I read aloud, I tend to feel each book more deeply than I do when I read silently. And when the book has a moving story, it isn’t unusual for me to begin choking back tears right there at the kitchen table. Naturally, my kids make fun of me for this, but I don’t mind. I mean, I don’t want to start wailing at breakfast or anything, but I want to be moved in some way by the books I read.

Well, let me tell you what happened the other day when I was reading to Lulu. The book is called A Long Walk to Water (based on a true story) and, despite its thin size, it packs an enormous emotional punch at the end. So I’m on the last page, then the last sentence, and WHAM! I’m bowled over by the ending—it’s so beautiful, so moving, and I start to cry.

Then I look up and see that Lulu has turned away—she’s crying, too. Such a lovely moment: it was the first time I saw her cry in reaction to the books I read to her, the first time she couldn’t hide the emotion I know she feels inside.

I must confess, though, that one thing kind of frustrates me. It’s not so important, I know, and I don’t really give it much energy, but still…

Lulu can’t seem to get 100% on her English tests at school! These are very easy tests of very basic English and yet she invariably makes one or two mistakes on every test!

These errors have nothing to do with her knowledge of English. Part of the problem is the fact that she still hasn’t developed a strong-enough habit of checking her work carefully, which is something I continually stress. As a result, simple carelessness can be to blame.

But the other part of this just isn’t her fault: Half the time her “wrong” answer is technically correct—the English itself is correct—but to the teacher’s eyes it’s “wrong” because Lulu was expected to give a different word or phrase, the one they had studied in class. (While I’ve been tempted to speak up about this, it’s probably best that I just bite my tongue.)

In terms of English tests, next year I plan to have both Lulu and Roy begin sitting for a widely-used test of English ability in Japan known as EIKEN. Not only will good EIKEN results potentially help them when they finally apply to high schools and universities, but I think the very concrete nature of this goal will add more structure and motivation to their daily efforts during the next few years.

Meanwhile, her ability in Spanish (see Please Help My Kids and Me Learn Spanish!) continues to grow, slowly but surely. Our lively Spanish teacher (originally from Madrid) has been coming to our house roughly twice a month for the past three years and, combined with a series of workbooks, this has enabled Lulu to develop a fair amount of basic ability—particularly, passive ability—in this language. (I have little Spanish ability myself, so I’m not really much help, beyond serving as the organizer of these efforts.) My hope, of course, is that eventually, with further opportunities to study and use Spanish in the future, Lulu’s ability in this third language can become strong and active, too.

And who knows? Maybe her trilingual skill can serve as a springboard for learning even more languages in the future? Lulu may still be on the small side (while regularly wishing aloud to grow taller), but there are big possibilities for her life ahead, and her interest and ability in languages are a key part of this potential.

Read more of my posts about Lulu…

My Bilingual Daughter Is 13. My Bilingual Son is 10. So Why Is Their Level in the Minority Language Basically the Same? (age 13.7)

My Daughter and I Hit a Big Milestone on Our Bilingual Journey Together (age 12.9)

How I Got My Bilingual Daughter to Eagerly Do Her Homework in the Minority Language. (age 12.7)

“I Can Help People”: I Interview My Daughter on Being Bilingual (age 8.9)

And see the many questions from readers posed to Lulu and Roy at The Bilingual Zoo, along with their personal responses…

Talk to the Monkeys! (board at The Bilingual Zoo forum)

PrevPreviousLook! I Shook Hands with a Kangaroo! (And Much More from Our Trip with Grandparents)
NextUpdate on My Son’s Bilingual Life at 11.9 Years Old: Funny Photos, Art Awards, and Junior HighNext