This Wish to Believe in Santa Claus 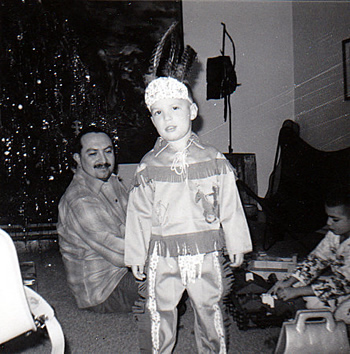 This is me at the age of three. I know, it looks like I’m dressed up to go trick-or-treating on Halloween, but the photo was actually taken on Christmas morning—that dark, twinkling blob in the background is the Christmas tree. (And that’s my father and my brother—my father is the one with the mustache.)

I can’t recall why Santa gave me an Indian costume that Christmas, but I do remember that it quickly became my favorite outfit and I wore it regularly for the next couple of years, until I sadly outgrew it.

Of course, my belief in Santa Claus is something else I sadly outgrew.

This morning, though, I was snuggling in bed with a true believer. Despite the logical cracks that are now appearing in 5-year-old Roy’s concept of Santa Claus—like his lovely question from Funny Remarks from a Bilingual Child: “When Santa was little, did he get presents from a different Santa?”—his innocent desire to believe in such a glorious fantasy is still far stronger than any doubt. (“How will Santa get in our house tonight?” he was wondering aloud, with some concern. “We don’t have a chimney. And the door is locked.”)

Even Lulu, at the age of 8, still feels that powerful pull to believe. I know she’s wavering now, between logic and belief, but she continues to talk about Santa as if he exists. (“I’m not going to write a letter to Santa this year,” she told me a few weeks ago, “because I want my presents to be a surprise.”)

The truth is, I don’t think anyone really wants to let go of this wish to believe in Santa Claus—in the basic generosity and goodness of our world—even after logic, and the harder reality of life, can no longer be denied.

In Strange-But-True Tales: Baby Chicks in the Bathtub, I encouraged the idea of telling stories from your childhood to engage your children’s language ability. Well, one of the stories my own kids enjoy hearing, over and over, is a Christmas tale involving me and my brother, their uncle. It’s a fun little story that illustrates our lingering wish to believe…

Mumbling in the dark

My brother and I shared a small bedroom when we were kids, and sometimes I would wake to hear him mumbling in his sleep.

One December night, when I was about 14 and he was 16—a long-haired rock-‘n’-roll teen at the time—I awoke at the sound of his soft mumbling…and was amazed at what he was saying.

The next morning I excitedly told him what I had heard, but he wouldn’t believe me.

I was forced to let it go…until it happened again, soon after. I listened to the soft mumbling in the dark, then told him about it the following morning.

Still, he wouldn’t believe me.

Next time, I thought, I’ll be ready.

A few nights later, he was mumbling again. I woke up and switched on a clunky tape recorder that I had positioned by my bed. Its small red light was aglow as I fell back to sleep…

In the morning I rewound the tape and played it back for us both. Amid the background hiss, a soft childlike voice—so different from my hip teenage brother—could be clearly heard:

“Santa…” he was saying, as if staring in awe at the great man himself. “Santa…”

And may you long believe in Santa Claus, too!