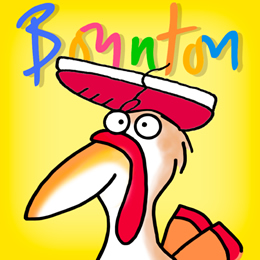 In addition to her work as a humorist and children’s author-illustrator, Boynton is a songwriter who has produced four albums of distinctive, offbeat music.

If English is the target language for your baby or toddler, and you don’t yet have any of her board books in your home library, I recommend them highly. We had about ten of her appealing titles when my kids were younger and they were constant favorites. (For more on the importance of reading aloud to children, see The Secret to Raising a Bilingual Child.)

For older kids, her music is a lot of fun. We have three of her book-and-CD sets, and the songs are quite clever and amusing. (See How the Power of Music Nurtures Bilingual Ability for the rationale behind making music an integral part of your efforts.)

Board Books for Babies and Toddlers 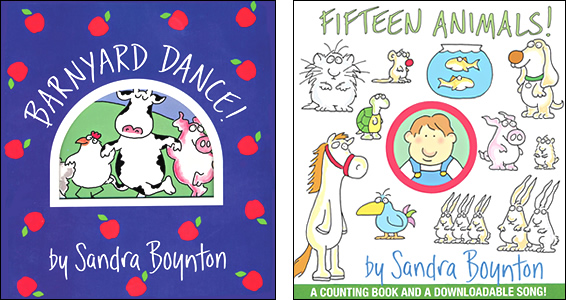 The cute characters and goofy humor of Sandra Boynton’s board books appeal to many babies and toddlers (and their parents). The books that my kids and I have particularly enjoyed include:

Barnyard Dance!
Told in lively rhyme, farm animals engage in a spirited dance around the barnyard.

Blue Hat, Green Hat
Wonderfully absurd, my kids would giggle and giggle at this book. (Even my wife got into a giggle-fit over it once.)

But Not the Hippopotamus
A silly, funny book, with a nod to phonics, starring a shy hippo.

Snuggle Puppy
A sweet book for the parent-child bond, the words are actually the lyrics to the “Snuggle Puppy” song found on Philadelphia Chickens. If you know the tune, you can then sing it to your child.

Fifteen Animals!
This board book is also based on a great song from Philadelphia Chickens. That song, “Fifteen Animals,” about a boy who has 14 animals named “Bob” and one named something else (I don’t want to spoil the joke), is very catchy, very funny.

You can listen to the whole song—and even freely download it as an MP3 file—from this page on the publisher’s site. 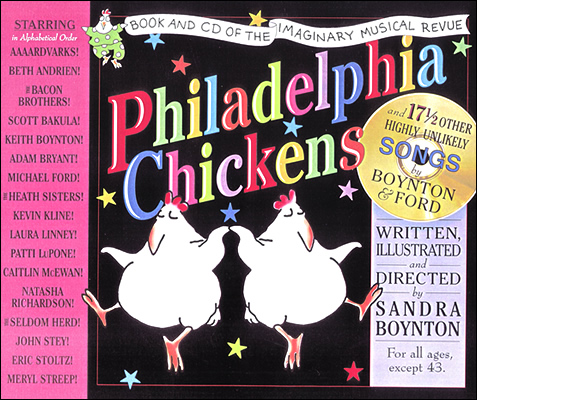 Sandra Boynton’s unique sensibility shines through in her music, too. The book-and-CD sets feature plenty of fun songs, each with a cute full-page illustration, as well as the sheet music and lyrics. The songs are performed by a wide range of people, including such well-known entertainers as Meryl Streep, Kevin Kline, Patti LuPone, Alison Krauss, and B.B. King.

Philadelphia Chickens
This album, billed as an “Imaginary Musical Revue,” includes some of our favorite Sandra Boynton songs, so we play it more often than the other two. Along with “Snuggle Puppy,” “Belly Button,” and “Fifteen Animals,” we particularly like “Pig Island” and “Pajama Time.” Some of the other songs lack kid-appeal, I think, but the best of her work is in a special class of its own.

Blue Moo
Subtitled “17 Jukebox Hits from Way Back Never,” this CD features some fun “oldies” with a 50s and 60s feel, including “One Shoe Blues,” performed by B.B. King, “Singing in the Shower,” and the song that once had my kids marching around the house day after day, “The Uninvited Parade.”

And here’s the music video of “One Shoe Blues,” featuring B.B. King.

Dog Train
This CD (“A Wild Ride on the Rock-and-Roll Side”) has gotten less air time in our house compared to the other two. The lyrics continue to be clever, but perhaps the music itself isn’t as catchy. However, the love-lullaby “Evermore,” sung by Alison Krauss, is a gorgeous song and she sings like an angel.

[stextbox id=”comments”]How about you? Have you used any books or music by Sandra Boynton? Which ones are family favorites?[/stextbox]

PrevPreviousTurn Your Kids into Eager Readers with This Fun, Simple Strategy
Next5 Bilingual Blogs and Sites You Should Know AboutNext