The Power of Using the Minority Language to Help Others 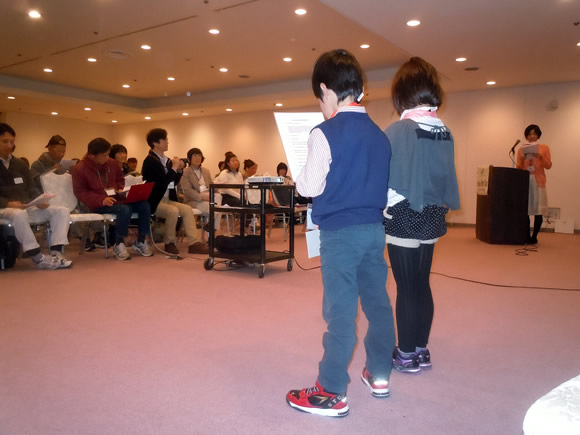 Today I’d like to follow up on my last post, When You Feel a Lack of Support for Your Bilingual Journey from the People Around You. In that article, I mentioned three ways to raise awareness of the value of bilingual ability and the minority language—whatever the minority language might be.

These ideas include emphasizing the positive impact of bilingualism on the human brain, from childhood through old age; pointing out that ability in multiple languages can’t help but enrich a person’s life in this interconnected era; and demonstrating how the child’s bilingual ability can be of service to others.

It’s this third idea—how the minority language can be helpful to others—that I’d like to explore further in this post.

Let me begin by explaining what my kids are doing in the picture above.

The other day was an annual event in Hiroshima called the “Day of International Exchange and Cooperation.” This event brings together a variety of international groups and activities at the conference center in Hiroshima Peace Memorial Park.

One of these groups is the Hiroshima Interpreters for Peace, which offers a workshop for people who may be interested in serving as volunteer guides for visitors from overseas. The workshop, attended by about 80 people each year, involves role playing some scenarios with “guides” and “tourists.” These short conversations, about sites of interest in the city, are scripted and performed in English.

In A Powerful Way to Inspire a Positive Attitude in Your Bilingual Child, I explained that Lulu and I had attended this workshop the previous two years, where we volunteered to model the conversations and read them with the participants. And because it was such a good experience for us both, I thought that this year Roy could benefit as well.

At first, he wasn’t all that eager to go—he’s only 6, remember, and rather shy in new situations—but when I told him that he didn’t have to actively participate, he could just sit and draw, he agreed to tag along.

It didn’t take long at all, though, for Roy to feel comfortable in the warmth of the people there. And once he overcame his initial shyness, he became an enthusiastic little helper, taking part in the role plays in front of everyone and modeling the script in a loud, chipmunky voice when we split into smaller groups.

Frankly, I was surprised, and delighted. I hadn’t expected him to participate at all. And the fact that he became so quickly motivated to take part reaffirmed a fundamental belief within me:

Human beings of all ages are intrinsically wired to feel a deep sense of satisfaction when they engage in helping others. The use of a personal ability—like language ability—in service to other people may be the most powerful, most motivating experience of all when it comes to inspiring a positive attitude and constructive action.

Of course, children experience all this unconsciously—they just instinctively feel good when they’re helping others. This feeling then fuels the sort of attitude and action that I’ve witnessed with Lulu and Roy at these workshops.

As parents, seeking out regular opportunities for our children to use their minority language in helpful ways can have a tremendous impact on the course of our journey. Not only can such experiences instill a more positive attitude in kids, the fact that their bilingual ability is benefiting others also casts the minority language in a more favorable light in the eyes of those around us.

I realize that your particular circumstances may make it seem that opportunities like mine don’t exist for you. And as far as your local community goes, this could well be true. But I would encourage you to think bigger, to the whole wider world available to you through the Internet and old-fashioned letter-writing. Ponder this question continually, at every stage of your bilingual journey, with as much imagination and creativity as you’re able:

How can I connect my kids to the world via the minority language in ways that might benefit others’ lives?

How about you? I’ve added one idea below in the first comment. Could you add another?