The Magical Ingredient for Motivating Your Bilingual Child 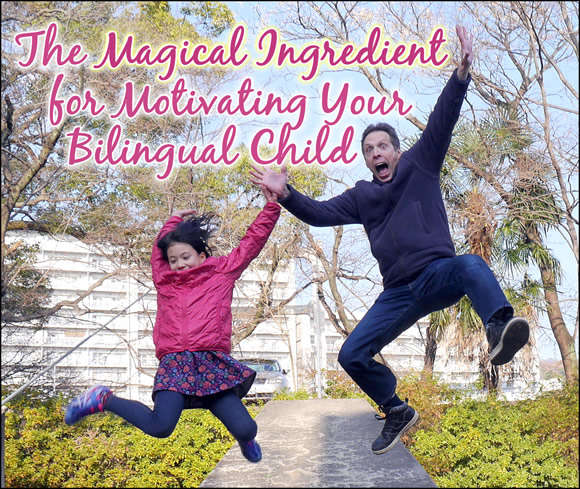 From time to time (as I first mentioned in How Rats in the Bathroom Can Boost a Child’s Bilingual Ability), I ask my kids to memorize a poem in our minority language and recite it back to me. When they do, they earn a little treat. I can’t say they’re highly motivated to do this, but the treat usually provides them with enough incentive to complete the task and benefit from the effort.

The other day, though, it wasn’t working. I think they felt burdened with other tasks and mine just made their load heavier. They moaned when I first mentioned it, and groaned when I gave them reminders through the afternoon.

I could have let it go, of course—it wasn’t really a big deal to me that day, but it apparently was to them. Still, I was curious to see if I could get them engaged, even excited, about doing it if I added a bigger dash of the “magical ingredient” for motivating kids.

I’ve worked with children and youth for a long time. I was practically a child myself (I still practically am) when, at 19, I served as a camp counselor for a cabin of 12-year-old boys at a summer camp in the United States.

One day, at lunch in the large dining hall, I was sitting at the end of a long table with my campers, a tall garbage bin just behind my chair. Our lunch was winding down and all the paper plates and cups had to be passed toward me so I could throw them away.

I’m not sure why—maybe I was just tired of repeatedly making this request to ten dawdling boys—but a strange bolt of enthusiasm suddenly hit me. “Garbage!” I cried, eyes gleaming madly. “Garbage! Give me garbage!”

My raging fever for waste quickly went viral. Seconds later, the whole table was eagerly passing down the plates and cups with cries of “Garbage! Garbage! Give me garbage!”

Twelve years later I was in the Czech Republic with a group of Czech students. I was a 31-year-old English teacher and this was a two-day outing for college freshmen at a retreat center in the Bohemian countryside.

In addition to a schedule of language classes, the teachers were asked to lead an additional activity of their choice. The other teachers put things like “Listening to Pop Music” or “Playing Word Games” on the sign-up sheet.

I put “Cleaning the Bathroom.”

It was intended as a joke, but two male students signed up so I carried on with it quite seriously. “Bring your toothbrush,” I told them.

That afternoon we were in the men’s bathroom, scrubbing the urinals. And despite how absurd this was—and how normally we would have avoided such a task (especially with our toothbrushes)—we spent nearly an hour in there, enthusiastically cleaning. With straight faces—broken by fits of laughter—we even described and demonstrated our most effective techniques.

These two experiences, as silly as they might seem, taught me something very important about working with children and youth: the “magical ingredient” for creating motivation is “deliberate enthusiasm.”

After all, if “deliberate enthusiasm”—the conscious and tactical use of enthusiasm—can kindle motivation for throwing away garbage and scrubbing a urinal with your toothbrush, it can generate motivation for almost anything.

And this is what I did when my kids were reluctant to memorize and recite that poem: I chose enthusiasm and I got enthusiastic. Instead of continuing to carp at them about it, I jumped in and began acting out the poem—like a game of charades—to help them remember it. The task suddenly took on a new tone—playful, fun—and my kids became charged with this same positive spirit. They now were able to complete the task quickly (and finally receive their treat).

So the next time you’d like to get your kids more motivated for a task (even tasks involving trash or toilets), try a bigger, bolder expression of enthusiasm for that activity yourself and see if this “magical ingredient” could make them more enthusiastic, too.

[stextbox id=”comments”]How about you? Any stories where your enthusiasm made the difference in motivating your children?[/stextbox]

PrevPreviousMy 6 Resolutions for 2015 and 6 Ways I Can Help You with Yours
NextVIDEO: With Bilingual Kids, There’s a Madness to My MethodNext