Recommended Resources: The Language Bear (and a Book Giveaway!)

The winners are in! Tatiana in Ukraine has won “Bosley Sees the World” and Kiara in Italy has won “Bosley Goes to the Beach”! Congratulations! Tim Johnson of The Language Bear will contact you directly to arrange delivery of your books!

Tim has also agreed to offer a special discount to any reader of this blog who would like to purchase a book. To place an order, simply click here for “Bosley Sees the World” or here for “Bosley Goes to the Beach.” Then, on the order form, enter the secret word monkey in the “Offer code” field. The 25% discount is good only for the first 20 copies of each book, so place your order soon if you’d like a copy at this lower price. (If you have any questions, please email Tim at The Language Bear.) 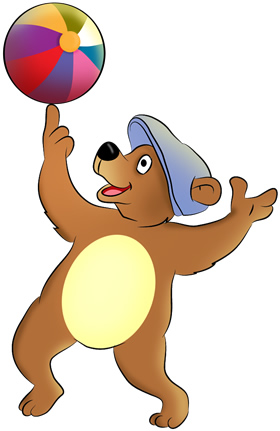 Want to win a colorful bilingual children’s book, courtesy of Bilingual Monkeys and The Language Bear?

If you’re already a subscriber to the Bilingual Monkeys Newsletter, just skip merrily ahead to learn more about the books produced by The Language Bear and how to enter the giveaway.

If you’re not yet a subscriber to my weekly newsletter (it’s free!), simply click the link below to enter your first name and email address. You’ll then be eligible for this giveaway and every other upcoming contest held at Bilingual Monkeys. Not only that, you’ll regularly get additional ideas and inspiration not found on this site to help boost your children’s language ability.

Get my free newsletter!

For more details on the newsletter, and other subscription options, see the subscribe page. To view the fun results of the last contest, which involved “surprise packages” sent by me and my kids from Hiroshima to winning families in France, Germany, and Serbia, see Do You Remember Those “Surprise Packages” from Japan?

The Language Bear is a publishing venture by Tim Johnson, an American author writing bilingual children’s books, available in a range of languages, that are specifically designed to support the process of second language acquisition in young children. At the same time, Tim hopes his books will help broaden a child’s curiosity of the world and cultural awareness. 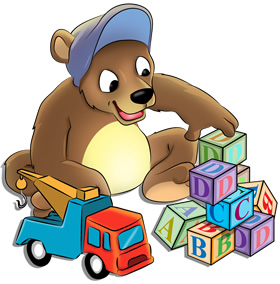 The little hero of Tim’s colorful dual-language books is a cute, playful bear cub named Bosley, and each gentle story depicts Bosley pursuing a new adventure. With the simple text provided in two languages on every page (English-Spanish, English-French, English-Japanese, etc.), the child is exposed to useful words and phrases in the target language as Bosley learns about the bigger world outside his small cave.

The books are especially suitable for reading aloud to smaller children, from birth to around age 5, but could also be used as early readers when children, of any age, are beginning to read independently.

In fact, I wish Tim had created the books a few years earlier, because I know my own kids (now 9 and 6 and reading at a higher level) would have enjoyed them a lot when they were younger. I’m sure we would have read them together over and over again!

Bosley Sees the World
The first book in the series finds Bosley exploring the natural world around him before returning to the comfort of his own little bed.
Translations: Spanish, French, German, Italian, Russian, Japanese, Chinese, Arabic
Formats: Print, Kindle (coming soon: iBookstore)

Bosley Goes to the Beach
Perfect for summertime reading, the book tells the story of Bosley’s visit to the beach with his mother and his encounters with other friendly creatures.
Translations: Spanish, French, German, Italian, Russian, Japanese (coming soon: Chinese)
Formats: Print, Kindle (coming soon: iBookstore)

Keep up with the whole growing series of Bosley books by visiting Tim Johnson’s author page at amazon. 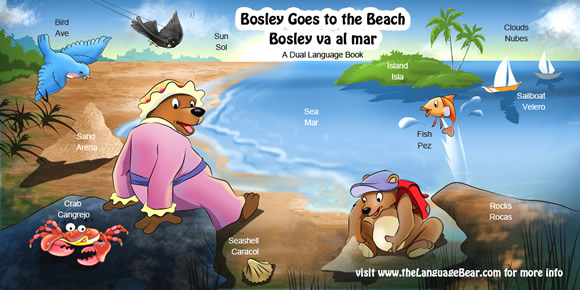 1. First, make sure you’re subscribed to the Bilingual Monkeys Newsletter. (If not, use the form above or visit the subscribe page.)

2. Then, to enter the giveaway, just leave a comment below with this information:

If you don’t include all this information, your entry won’t be included in the drawing!

3. The last day to leave a comment is Friday, August 16. (When I check my computer on Saturday morning, Japan time, entries will then be closed.)

4. Two drawings will be held on Saturday, August 17: one drawing for those who want Bosley Sees the World and one drawing for Bosley Goes to the Beach. For each drawing, your names will be placed inside Bosley’s blue cap and then Bosley himself will choose the lucky winners. (Or Tim will fill in, if Bosley is busy.)

5. The winners will be announced on this blog, and Tim will contact them directly to deliver their books.

Best of luck, everyone! I look forward to your entries!

PrevPreviousRemember Those “Surprise Packages” from Japan?
NextWhat My Hiroshima-Born Children Think About the Atomic BombingNext