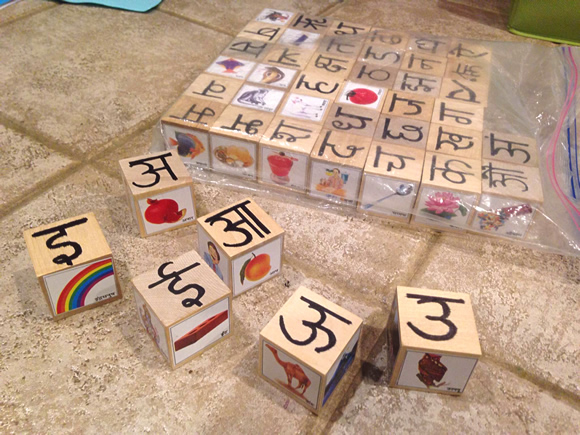 Today I’d like to put to rest the false and unhelpful notion that we “don’t have enough time” to make the regular efforts that are necessary to provide persistent input in the minority language and promote strong bilingual development in our kids.

I empathize with the lives of busy parents, believe me, but when we claim that we’re “too busy” to maintain effective daily routines or take on a productive short-term project, we’re not only acting in a way that’s counterproductive to our own greater aim, we’re deceiving ourselves. Because here’s the truth:

No matter how busy you claim to be, you can always give more time to your children—even if just a little more time—by making this aim a higher priority in your life.

And the only exception to this, I think, would be if you’re reading these words from a maximum security prison and thus have no choice in the matter.

Because that’s the thing: It’s about choice. It’s about consciously choosing how you spend the hours of your day. And let me emphasize that the building blocks of success—the time and effort we invest in nurturing the target language—are particularly needed early on in the journey, during the child’s first few formative years. It’s certainly possible to make up ground at an older age, but the whole experience can be a smoother success when a sincere commitment of time and effort is made from the very start.

Now I don’t discount the other obligations we have, not the least of which is making a living. But even when our work makes us terribly busy, we ultimately still have options: We can be mindfully resourceful about reshaping our daily schedule to create additional time for our kids or, if that proves difficult, reshaping our work situation itself. (In my case, I was blessed that the chance arose to do my work remotely, from home. If that hadn’t been possible, I would have had to take some other sort of action.)

Of course, an au pair or nanny who speaks the minority language is another viable option for language exposure, but let’s focus, firstly, on optimizing our own efforts: Beyond the language input we can provide, the greater amount of time we spend with our children will surely deepen the parent-child bond, enabling us to create even closer relationships with our kids.

Let me offer a concrete and encouraging example. Deepti Gupta (DeeptiGupta.com) is a busy actress who lives in the United States and has pursued an international career in film and theatre that stretches from the U.S. to India, Singapore, and Pakistan. At the same time, she juggles work off the set and stage as an actress for voiceovers and audiobooks and as a consultant and educator.

Meanwhile, Deepti is a mother with a preschool son and a minority language, Hindi, that she wants her child to speak in addition to English.

Despite her busy days, Deepti has also been mindful of her vital role in the process of handing down Hindi to her son. And this is clearly seen in the short-term project she pursued, with his help, to create a set of “alphabet blocks” in Hindi.

When Deepti, a reader of this blog, reached out with a photo of her finished blocks, I saw them as a lovely metaphor for the building blocks of time and effort that are so necessary for success on the bilingual journey. Via email, I asked Deepti about this creative project with her son and she kindly responded. Here are the highlights of our exchange… 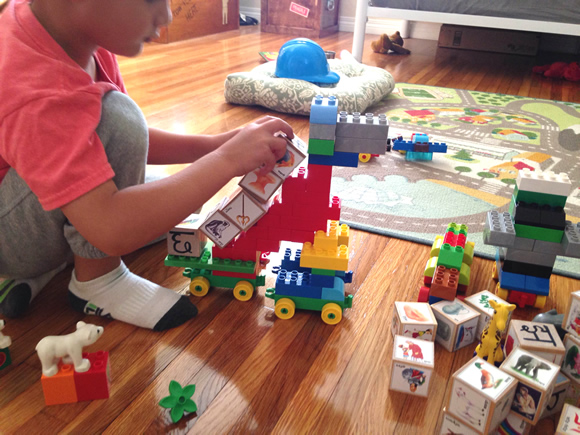 What inspired you to take on this project?

I saw my son playing with a lot of toys and blocks that had the English alphabet on them and, honestly, I got jealous and upset. Because I had no Hindi blocks for him to play with. When I looked online, I found some but they were quite expensive. So I thought: “I’m going to make him some blocks with Hindi on them!”

Tell us more about the project.

At first, I was only planning to make the blocks myself and give them to him to play with. But when I started working on them, and he showed interest, it struck me that this could be a parent-and-child project. So we worked on the blocks, little by little, making four or five at a time, over many months. Hindi has a lot more letters than English so it took time!

Did you ever feel like giving up? How did you persist?

I’m sure there were times I thought things like, “What’s the point? Will he even play with them? By the time we’re done, he might even be too old for them! Maybe this is one of those projects that never gets finished—another failure…”

But when I had those thoughts, I just moved on to something else that needed doing, and on a day I felt more relaxed and positive again, I’d say to my son, “Let’s make more Hindi blocks!” His own excitement about making them helped me feel that the project was worth it, no matter the negative thoughts.

How did your son help? And how did you use the minority language with him at these times?

We made the blocks by cutting out paper squares with pictures and letters on them and pasting them on the sides of the wood. Sometimes my son tried cutting them out, and though his squares were ragged, he enjoyed it. But he mostly pasted them on the blocks. He loved that.

Did this project teach you anything about raising bilingual children?

It taught me that opportunities abound for doing fun things with your kids in your language, and getting them excited about it. But it does require time and energy and creativity. These days, with work and other commitments, it’s hard to find the time. This morning, though, I played “I spy with my little eye” when we were in the car on the way to school—a Hindi version, of course. So there are opportunities if we look for them. A positive mindset, and making the effort to engage your kids is the key.

A few days ago we had a visitor and this person went into my son’s room and saw the blocks on the floor. My son then proudly said that he made those blocks with his mother. That, to me, is a great reward.

What rewards are waiting for you if you spend a bit of extra time and effort on daily routines like reading aloud or short-term projects like Deepti’s blocks? 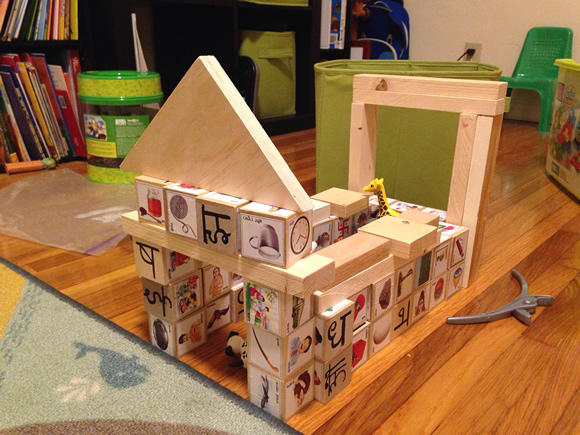 As you ponder that question, I recommend a good look at these posts, too, for further inspiration…

Movie Project with My Kids: “Purple Monster in the Woods” (Watch Now!)