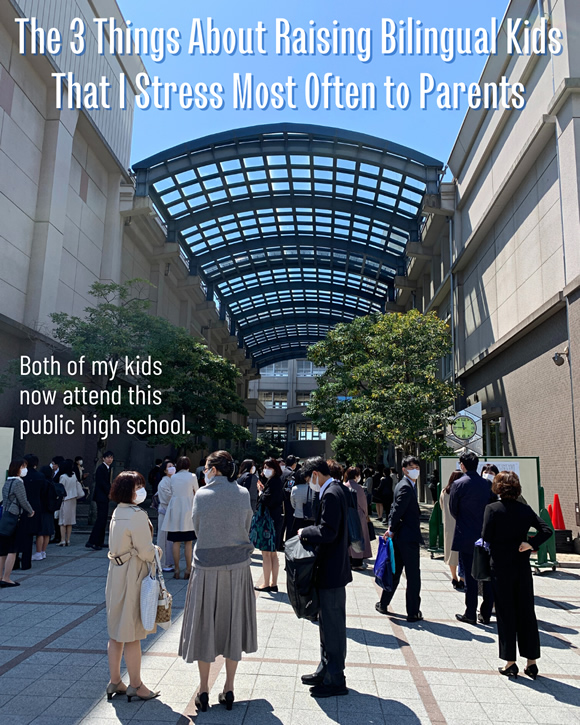 The new school year has just begun in Japan (the academic year runs from April to March) and my son has now joined my daughter at the same Japanese high school. In fact, they’re in the same program, the “International Communication Course” that offers more emphasis on English and other foreign languages, with my daughter in her third and final year, and my son in his first.

It’s hard to believe that my bilingual journey with them is very nearly at an end. While, naturally, they can still make further progress in both their Japanese and English—after all, language learning is an endless process for us all, even as adults—at this point they’ve become strongly bilingual in these two languages. As I shared recently, Lulu has passed the highest level of the Eiken proficiency test, the widely-used test of English ability in Japan. And I expect Roy will pass the same test later this year.

These days I regularly consult with parents about their bilingual or multilingual aim and, during these conversations, I have the chance to look back at my own journey with my kids and the things that have been most central to our success. While it’s certainly true that every family’s experience is different, and so our efforts should always be tailored as effectively as possible to our own particular situation, I do think there are some very basic and very powerful principles that apply to us all. These are the three things that I seem to stress most often to parents with younger kids.

1. Make the most of the younger years.

The more mindful and proactive you are, from as early as possible in your children’s lives, the more momentum you will create for language development and the more progress you will likely produce over the childhood years. I know the days spent with young children can feel very long sometimes, but the head-spinning truth is that, before you know it—really, before you know it—your kids will be in high school like mine. And as they grow older, the less time you’ll be able to spend with them and the less direct influence you’ll have on their lives.

Plus, language goals aside, when one day you look back at their early childhood, you’ll be very glad that you spent quality time with them while you had the chance.

At the same time, if your kids have already grown some, and you’re now feeling regret over the efforts you didn’t make when they were smaller, it’s vital to let go of the past and simply focus on the present and future. The truth is, you can still experience a lot of rewarding progress in the target language if you’re now willing to make this aim a higher priority in your life and pursue it as proactively as you can.

2. Stay persistent from day to day.

There are two “core conditions” for bilingual or multilingual success: the child must receive substantial input in the target language and feel a genuine need to use it actively.

The second of these conditions, need, may not be required in every case, such as when children are “conditioned” from a young age to use the minority language with their parents despite the parents’ obvious ability in the majority language. The first condition, though, is essential and universal: if children don’t receive sufficient input in the minority language, they will be unable to develop the level of proficiency that the parents desire. Thus, ample exposure to the target language must continuously be the highest priority for advancing the child’s language acquisition.

Staying persistent, then, means bathing the child in as much exposure to the target language as possible on a daily basis. This input should be mainly interactive (especially, talking and reading to the child), while supplemented with more passive exposure (like listening to music and watching TV). And it should come from every conceivable angle, both inside and outside the home.

Put plainly, the more input you pursue, the more progress you can produce. So do all that you realistically can, day after day, to provide your child with plenty of rich exposure in your target language.

3. Persevere over the years, no matter what.

When all is said and done, the basic difference between parents who realize the rewards of raising a bilingual child, and parents who don’t, is simply this: perseverance. Fundamentally, success at the bilingual aim boils down to endurance. As long as you don’t quit along the way, you can’t really fail because your sustained efforts will invariably fuel rewarding progress over time. The truth is, failure at the bilingual journey is really only possible when the aim is abandoned entirely. Even if you don’t finally experience the height of your original hopes, if you remain in the game, there will surely be significant and satisfying growth.

As I often stress: There’s always a payoff to perseverance.

So despite the difficulties you face, and the discouragement you feel, if success at the bilingual aim is truly important to you, I urge you to stick it out. Because if you just stick with it, if you just keep trying, you will succeed.

In other words, don’t overthink it. Tell yourself: This is important to me, and to my child, and I’m going to keep going no matter what. And at those low moments, which test us all from time to time, remember these wise words from Mary Anne Radmacher:

Courage doesn’t always roar. Sometimes courage is the quiet voice at the end of the day saying, “I will try again tomorrow.”

For more inspiration to empower your bilingual or multilingual journey, just browse this blog, visit my forum, or read my popular books…

Bilingual Success Stories Around the World

I WANT TO BE BILINGUAL!

PrevPreviousA Surprising Outcome to My Fundraiser for Ukraine
NextGuest Post: My PhD Thesis on the Language Strategies of Bilingual FamiliesNext