Thank You Letter from a Bilingual Child: Tatyana Leskowicz

As parents of bilingual children, it can be difficult to find perspective in our current struggles. Will my firm actions today really bring about a successful result tomorrow? Will my kids finally appreciate my efforts, though they now seem so defiant and ungrateful at times?

This feature series, “Thank You Letter from a Bilingual Child,” attempts to provide some helpful perspective on these concerns by offering the thoughts of bilingual adults reflecting on their upbringing as bilingual children.

If you’re a bilingual adult and would like to contribute to this series by writing a thank you letter to your parents or another loved one, just contact me to express your interest in guest posting at Bilingual Monkeys. 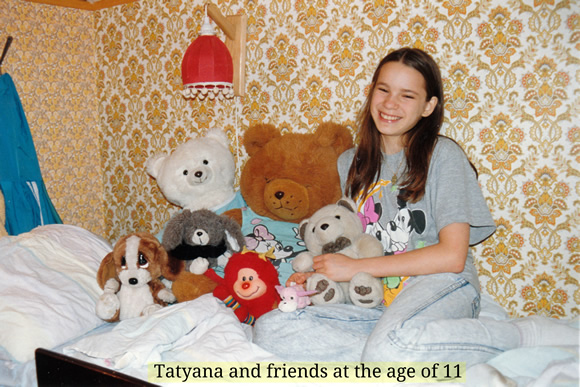 Tatyana Leskowicz is a U.S. resident who was born in Russia to Russian parents. As a child, Tatyana spoke only Russian with her parents, though they also sought to nurture her English ability through tutoring. Her family left Russia when she was 10, and after short stays in Sweden and Israel, they settled in the United States.

Tatyana is now married and has two daughters, ages 4 and 1. Her husband is American and they follow the OPOL (one person-one language) approach in their home, with Tatyana using Russian and her husband using English. She works as a software engineer, following in the footsteps of her parents and their profession.

How could you?! There I was, trying to bare my teenage soul to you about the latest tragedy in my life, and you didn’t care! “I no speaky English” you said in what by then must have been the family motto. You speaky! I know you do, I’ve seen you do it! Yet you stood there and slowly supplied me with the Russian words I didn’t know or didn’t remember, insisting that I use them. And this was only a few short years after you made me take those hated English lessons that were sure to “come in handy one day.” Oh, the irony!

Well, I’m an adult now. Now I can finally tell you how I feel about all this, and I have only two words to say to you:

I was young then. I thought that once you knew a language, there was no way you could lose it. Losing the language that defines your thoughts, how could that ever happen? Now I’ve done the research. Generation 1.5, that’s what I am—someone who immigrates as a child is similar to a second-generation immigrant when it comes to retaining the minority language. Fifty percent of us lose our native tongue.

But not me. I remember. I speak. Because of you.

I know I wasn’t always an easy child, but as an adult I now appreciate all the little tricks you played on me. Dad, remember that time I fell off my bike when I was 10 and got a concussion? You read The Wizard of Oz to me to help me forget about the pain. But soon you decided that I was better and could finish it by myself, right at the most exciting point. Convenient timing, wasn’t it? I would have fallen for it, too, if it hadn’t been the same trick you used on me when I was 6 and learning to read!

You then had the nerve to do the same thing when I was 13. You didn’t even pretend to be sneaky about it, either. You just said that I hadn’t read a book in a while and you had this great story by Clifford Simak I should listen to. Dang it, Dad! You made me fall for the same trick three times! And each time you were right, those books were interesting! I devoured the entire Wizard of Oz series in a matter of weeks and developed a life-long passion for science fiction because of Clifford Simak.

Thankfully, I’m old enough that I no longer need to be tricked to read in Russian, but I still rely on you to choose good books for me. Being apart from the Russian community makes discovering new authors tough. Good thing I have you to always hand me the next book that I’m sure to love.

And you, Mom—don’t think I’ve forgotten about you. You were always the strict one. I know now that yours was a much more difficult role than Dad’s “fun parent.” I was adorable, admit it, and yet you managed to hold the line when it came to Russian. My gray, puppy-dog eyes and darling smile couldn’t help me get away with English while you were around. You made me write those letters to Grandma even when my hand couldn’t write naturally in Russian. To this day, you still correct me on my pronunciation and grammar. It was annoying when I was a teenager, but now I feel the urge to call you every time I’m reading out loud and I find a word I’m not sure how to pronounce.

Your efforts now go beyond my own life. Because you stood firm with an emotional teenager, there are two more little girls that will speak Russian—your grandchildren. As I raise them, I take inspiration from you. Since I’m the only parent speaking Russia, I try to be a blend of you both: firm yet fun. I don’t allow English, despite the fact that they too possess the adorable gene.

Dad, I also think of your efforts to learn a new language. When you were reading a book, I remember how you’d look up all the words you didn’t know and write them down. You were never a natural at languages, like the rest of us, and yet there you were, reading book after book, writing down word after word. Slowly but surely, you learned three more languages. As a parent, I held that image of you in mind when I faced a toddler who refused to respond in Russian. I focused on just one word or phrase at a time until she was comfortable saying it—even if it took a week, even if it took a month. Word after word, phrase after phrase, we plodded along. And, just like you, she finally got it.

It isn’t always easy to let the people around us know how much we appreciate them. It definitely isn’t easy to know whether you’re doing the right thing for a child when the pay off, if there is one, will be years away. So I want to tell you that, yes, you did the right thing. That big emotional emergency I mentioned earlier? I have no recollection of what it actually was. Guess it was less important that I initially thought! However, my ability in Russian has managed to give me a different perspective on the world, enabled me to read some really fine books that will never be translated from the original, earned me popularity points with my classmates in college who were looking to translate some technical web pages available only in Russian, and even landed me a job interview.

Now if only you had done as well teaching me computer programming, I wouldn’t have failed that interview so miserably. But we’ll leave that for another letter…

[stextbox id=”comments”]How about you? Did you enjoy Tatyana’s letter? Please share your thoughts with her in a comment![/stextbox]

And here’s another fun letter from a unique perspective…