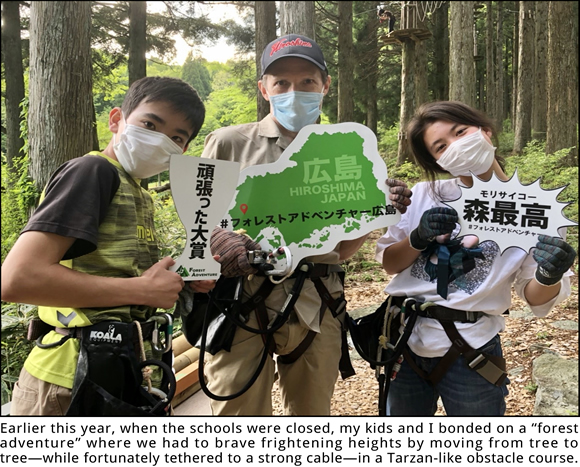 I took my daughter to the doctor this morning. Yesterday at school, during P.E. class, she felt a painful twinge in her left leg—probably a pulled muscle. It doesn’t seem to be anything serious, and will likely heal on its own in a few days, but the school wanted us to have it checked.

Naturally, I don’t wish for my children to injure themselves, but I must confess: it was a welcome chance for us to spend a little time together. Not only were we at the doctor’s office for nearly an hour, I then drove her to school afterward, which took another 20 minutes.

The truth is, now that both of my kids are teens—Lulu is 16, in her first year of high school, and Roy is 13, in his second year of junior high—our time together is quite limited. They’re both so busy with long days of school, team sports after school (Lulu plays tennis and Roy plays soccer), mounds of homework, and—when they have a little spare time—activities with friends.

There just aren’t many available moments for Daddy anymore. (Cue the sad violins.)

Of course, I knew this was inevitable, and I accept that our lives must continue to evolve as they grow increasingly independent. Yet I do sometimes feel wistful for their younger years, when the days could contain substantial amounts of time together.

A flashback to their younger years

This is also why the pandemic, as awful as it has been, was an unexpected blessing in a certain way. In the spring, the schools in Japan were closed for nearly three months and that meant my kids were at home and we suddenly had so much more time to share. In fact, this opportunity even enabled Roy and I to develop and publish an original coloring book (that was inspired by our pet bearded dragon). This would never have happened without the luxury of time we had together in the spring. And even though the kids have been back in school for a while now, our first book project was such a fruitful experience that we’ve gone on to pursue a second book project as well.

Since my kids are now older, and their ability in English, our minority language, is strong and active, I’m no longer necessarily concerned about the amount of exposure they’re getting for their English side. At this point, their English ability is well grounded and in no real “danger” of fading into a more passive state. This doesn’t mean, however, that I’m not still eager to engage them in English, when the opportunity is there, and that was certainly the case when the schools were closed and they were at home with me. Not only could I initiate a creative project with my son, entirely in the minority language, but I was able to interact with them more in general, as well as give them more daily homework in English—reading and writing tasks—than I usually can when school is in session.

When their schools finally reopened, I admit to having had mixed feelings. I mean, I was obviously glad that conditions in Japan were safe enough for children to return to school, and I was happy for my kids who I knew were getting restless at home, but the situation abruptly shifted from one extreme to the other: from having ample time together each day to having hardly any time at all.

In retrospect, this past spring was a kind of unexpected gift, like a brief flashback to their younger years when all that time we had together was not only a boon for our personal bond, it also enabled me to exert such productive influence on their minority language side. That’s the thing, you see: as our children grow, and our time with them shrinks, our influence on their language development also wanes. This is why I urge minority language parents to spend as much time with their young children as possible, and (playfully) exert the most influence they can during those early years…because this opportunity will be gone before you know it and you’ll suddenly be wishing you had more time, and more influence, with your busy teenagers.

One of the keys to success

As I was driving Lulu to school, and we were listening to a peppy Carly Rae Jepsen CD, I asked her about her first year of high school—the high school she had studied so hard to get into. While I do make a point of inquiring about her life from day to day, she’s often too tired, or too much in a “teenage mood,” to offer much more than a small grunt. But in times like these, when it’s just the two of us and she isn’t preoccupied with homework or her phone, she becomes more talkative.

I asked her: “On a scale of 1 to 10, how would you rate your experience of high school so far?”

Given the interruption of her first year because of the pandemic, which has also interfered with school trips and other school events, not to mention the heavy loads of homework she seems to have day after day, somehow I was expecting a slightly different response.

Now when it comes to raising bilingual kids, I don’t think we can be as generous as that and rate our experience a perfect “10.” After all, none of us can be perfect parents and that’s perfectly okay. We don’t have to do this perfectly in order to achieve a lot of priceless success. But one of the keys to this success, I think, is to ultimately, when our kids are older, be able to look back and give ourselves high marks for our efforts during their younger years when we had the most influence on their language development.

So if that’s where you and your kids are now in your journey, I urge you to make the most of your time together during these fleeting years when your influence is also strongest. And if you do, day by day, by the time they’re teens, you’ll surely feel a profound sense of satisfaction at the rewarding distance you’ll have traveled together, hand in hand, through their childhood.

[stextbox id=”comments”]How about you? Are making the most of these fleeting younger years?[/stextbox]

PrevPreviousAre Your Kids or Students Learning Spanish or English? This New Bilingual Book of Fairy Tales (with Online Audio) Could Help Fuel Their Progress!
NextWhat Happened to My New Book Featuring the Success Stories of Bilingual and Multilingual Families?Next