Important Thoughts on Babies and Hammers 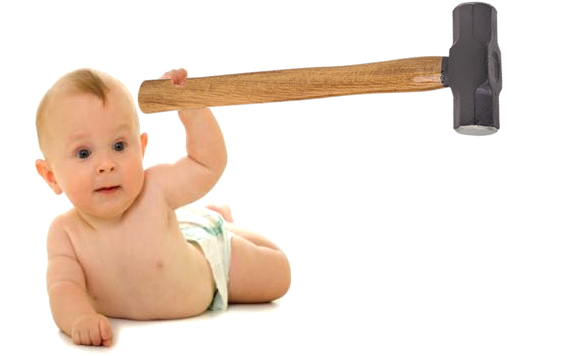 Quotes have long been an important part of my life. Over the years I’ve collected hundreds of favorite quotes that somehow speak to me, and inspire me. At any given time, the wall above my desk is continuously whispering several quotes that remind me of ideas I want to embody more deeply, or provide a helpful perspective on challenges I’m currently facing.

I also pin up quotes from my kids, like this little message written (and joyfully punctuated) by my son when he was 4:

Quotes, in fact, play a significant role in my work because I find that suitable quotes not only offer ongoing encouragement in the tiring day-to-day efforts of nurturing language development (as in 49 Inspiring Quotes for Parents Raising Bilingual Children), they can even serve as keen metaphors for the larger journey itself.

The other day I came across this compelling quote…

Jacob Riis, who was a social reformer in New York City over a hundred years ago, didn’t have bilingual children in mind when he wrote this—I expect he was speaking about the importance of persistent efforts when it comes to making changes in society. To me, though, I immediately saw a connection between the stone cutter and the parent of a bilingual child—and particularly, the parent of a new baby.

Normally, I would say that hammers and small children don’t mix. But think of it this way:

A parent nurturing a child’s minority language is much like that stone cutter hammering at his rock. The child produces no intelligible language for quite a while—no “cracks” are evident—and then suddenly “the rock splits” and the minority language becomes active…or not.

That’s the thing: Without that persistent hammering through the child’s first years of life—those daily efforts at creating meaningful exposure in the target language—a “clean split” probably won’t occur. Instead, the majority language will charge ahead when the child starts speaking and the minority language is left behind, where it grows more passive.

For new parents, that hammering must take place in full faith. Until you gain some personal experience with a first child, it’s natural to wonder if your efforts will actually pay off. But know this: they will. If you hammer away persistently enough—playful, joyful hammering—the “split” will occur naturally, inevitably. Your efforts through those first few years will lead to active communication in the minority language when the child begins to speak. But if those early efforts are insufficient…well, a rock won’t split in two if you hammer at it too lightly.

Metaphor for literacy, too

This quote from Jacob Riis is also an apt metaphor for fostering literacy in the minority language. In my view, the daily practice of reading aloud to a child, from birth, not only hammers at oral proficiency, it hammers at literacy development, too—it’s doubly productive. Reading and writing won’t really emerge until a year or more after the child is speaking, but all the efforts made in the years prior to that time—hundreds and hundreds of read aloud sessions—will pave the way for another “split” in the child’s ability to read and write in the minority language.

The simple fact is: The more hammering you do early on—especially through the quantity of speech directed at the child and the amount of reading aloud you pursue—the more likely you’ll foster positive “splits” in the minority tongue for both oral and written language.

True, those “splits” can certainly occur later on, but when the majority language moves relentlessly ahead of the minority language from an early age, activating a child’s passive ability can become a sizable challenge. If relatively “balanced” bilingualism is important to you—because, for one, you wish to communicate with your child in your mother tongue for the life of your relationship—then I suggest it’s far better to hammer hard from the start and split those stones early.

Are you a new parent? Also see Warning to New Parents Who Dream of Raising a Bilingual Child.

How about you? What are your thoughts on babies and hammers?