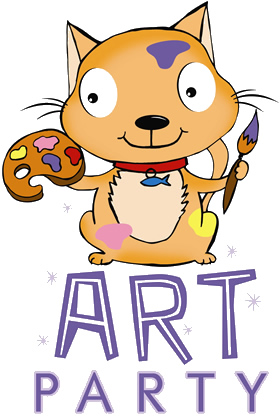 On Monday evening I was picking up Lulu from dance class at the large arts center in town. It just so happens that Monday was also the day the annual Art Party exhibition was being set up in the gallery there.

Art Party is a benefit event in which pictures made by children in need, from a range of nations, are displayed and sold over the course of six days in December. All the proceeds from the sales of this artwork are then donated back to the participating children’s groups.

Art Party is marking its 10th exhibition this year. In 2003, before Lulu and Roy were born, I began Art Party with the help of Japanese friends. Today I’m no longer actively involved in preparing the exhibitions, but it’s very gratifying to see that others have continued to hold the event each year.

And that’s how I felt on Monday, standing there in the lobby of the arts center, waiting for Lulu and watching a dozen volunteers through the big glass doors of the gallery as they scurried about, putting the finishing touches on this year’s exhibition.

When Lulu emerged from the elevator, we walked over to the doors and stepped in to say hello to the few people I knew from the time I led the event. One of them, a Japanese man who I didn’t expect to see, suddenly appeared before me, smiling broadly. This man and I had worked closely together on the first several exhibitions, and became fast friends, but then drifted apart when our ties to Art Party weakened. In fact, I hadn’t seen him for three or four years.

Pulling me close, he whispered in Japanese, “I have cancer. But I’m not ready to die.”

When mortality is present

The thing is, he’s not that old. He and I are the same age. In fact, he and I are the exact same age: our birthday is the very same day. And that odd connection has seemed to strengthen the bond between us.

Now if you follow this blog, you know that mortality is on my mind at times. To me, thoughts of mortality, unsettling as they might be, help keep my priorities straight. As I’ve likely already lived over half my lifetime—assuming I make it to infirmity—I now see my days dwindling in a way I never did before.

The truth is, when mortality is present, I feel more presence. Not only am I able to invest more energy in my kids—and their bilingual upbringing—I’m able to live each day a little more fully.

Still, I seem to forget all this recurrently: I get so busy, so lost in the hectic pace of daily life, that it can take the appearance of an old friend, staring down his own mortality, to jolt me back to mine.

In Thoughts on Death and Life and the Bilingual Child, I stressed the idea of “seizing each day.” After all, as important as strategies and resources are to our success in raising a child with good bilingual ability, of even greater significance, perhaps, is the way we live life itself. The more keenly we can see our higher priorities, and the more present we can be each day, the richer the legacy we’ll be leaving for our children—in both language and living—after we’re gone. 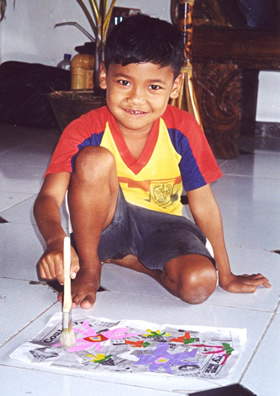 For those living in the Hiroshima area, please pay a visit to this year’s Art Party exhibition, if you’re able. There are more than 300 pictures on display, from countries around the world. Not only does the event raise money for children in need, it’s an engaging experience for visitors, too, with the artwork serving as “windows” into the children’s lives and nations. The pictures can be purchased for a minimum donation of 1000 yen, and 100% of the proceeds are returned to the participating children’s groups. (They make great Christmas presents!) Admission is free.

Who : Adults and children alike