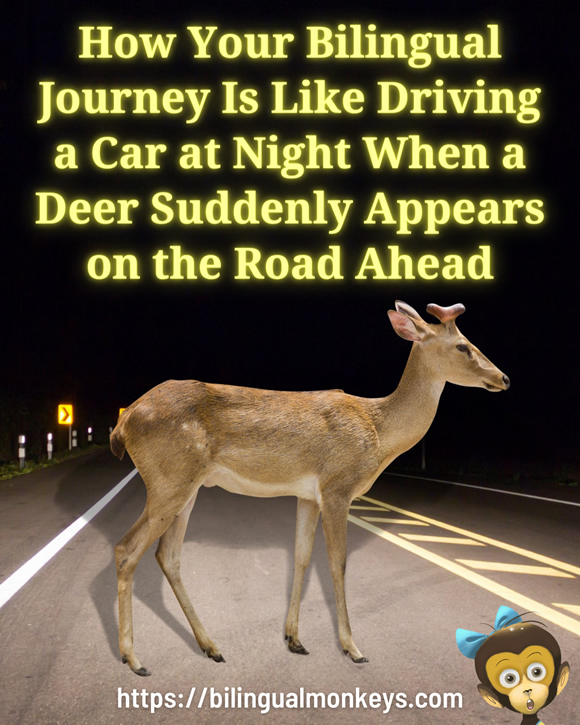 Recently, at The Bilingual Zoo forum, I responded to a parent’s concerns about their bilingual journey by offering the metaphor that I’ll share today. A blog post on this theme feels like a good way to begin a new year that will hopefully be very fruitful for your bilingual or multilingual aim with your kids.

The wording between these two is nearly the same, but the mindset they represent is vastly different. In fact, this difference could well be the fork in the road between success and failure.

“Thinking things over” means reflecting on your aim and your circumstances in order to mindfully make the most effective choices possible for generating progress on your bilingual journey over time. (And these choices, like how the two or more languages are used within the family, can change as your aim and/or circumstances evolve.) Your choices then translate into your efforts, which you pursue proactively from day to day in order to make progress toward the fulfillment of your aim.

“Overthinking things,” on the other hand, means continually second-guessing the choices that you’re already made, before you’ve even given them much time and effort to work, as well as projecting further concerns into the future. This mindset generates a stream of doubts and worries that undermines the parent’s efforts and joy, and may eventually lead to deep discouragement and the decision to abandon the original aim entirely.

It’s important to underscore the point that “failure” at raising a bilingual child is really only possible when the aim itself is abandoned. As long as the journey continues, even if more modestly than originally intended, progress can always be made. Imagine making ongoing efforts to nurture a second language in your child, from the early years until their teens, and yet experiencing no progress at all during this time. The reason this sounds absurd is because it isn’t possible!

As I advised the parent at The Bilingual Zoo, if she simply pursues her original choices—which I believe would be effective—and maintains them over the months and years ahead, her child, as well as both non-native parents, would no doubt become progressively capable and comfortable in their target language. And whenever any actual concerns arose, she could address them in stride, at that particular time. Because here’s the thing: You don’t have to figure out everything in advance when you want to raise a bilingual child. You just need to make the most effective choices you can, at any given time, then pursue them with a full heart and a playful, unflagging spirit.

In this way, it’s like driving a car at night: You can’t see very far in front of your headlights, but that’s okay. If you just keep driving, you can gradually go a long, long way on your journey, right? And if you suddenly spot a deer up ahead, dashing across the road, you can slow down or swerve around it. Or if you happen to take a wrong turn at some point, and feel hopelessly lost, you can still figure out how to get back on the right road again. In other words, you proactively deal with any difficulties as they come.

You wouldn’t just sit in your car and cry, would you, if you got lost? (At least not all night!) And you wouldn’t abandon your whole journey, before it had barely begun, because you’re worried that you might eventually crash into a deer, right?

No, you keep driving, you keep going, because it’s important to you to make progress and ultimately reach the destination that you seek.

But if not, if you do let the doubts and difficulties derail your efforts, prompting you to turn back and abandon your journey, well, then perhaps the aim wasn’t really important enough to you in the first place. There’s nothing “wrong” with that, but if your bilingual or multilingual aim for your kids is important to you—truly important to you—then you drive on through the darkness, no matter what.

How about you? Any thoughts about your own bilingual journey (or about deer) after reading this post?

PrevPreviousMy Personal Highlights (and Lowlights) from 2021
NextPodcast Episode: The Gift of BilingualismNext