How Translation Tasks Can Be Doubly Productive for Your Bilingual Kids

As my children get older (my daughter is now 15 and my son is 12), I’m trying to increase the amount of opportunities they have to engage in translation activities: in effect, stretching their ability in two languages simultaneously and deepening their grasp of the more subtle differences between them.

I wish we had more time for writing because this is now the area where more practice is needed, and I’ve found that translation tasks are very effective toward this end. But as I’ve moaned about before, with my kids leading busy lives in junior high school, and having even less time for English and Spanish (our two minority languages), squeezing in the amount of writing that I’d really like them to do just isn’t realistic. Still, short translation tasks can be a productive way to get them writing in brief bursts on a regular basis, and for me to pinpoint, in their written work, any shortcomings in their language ability.

Because our main minority language is English, with Spanish still at a lower and more passive level, these tasks generally involve having them translate a short passage of text from the original Japanese or Spanish into natural English. Such translation texts—along with other writing tasks in English—typically take them from 5 to 15 minutes to complete, depending on the length of the text. Again, this isn’t the sort of concentrated time for writing that I would prefer, but it’s nevertheless true that this time adds up over the months and years and helps advance their writing ability at a steady pace.

Let me offer a concrete example of how a translation task can benefit a child’s development in two languages at once. Although I continue to have Lulu and Roy translate from Japanese to English, I now more often ask them to translate something from Spanish into English so that they will be working with both of their minority languages at the same time: they can practice reading in Spanish while they practice writing in English. In this sense, it’s truly doubly productive.

The Spanish textbook we use—with a Spanish teacher who visits us about twice a month and by ourselves at home around 4 or 5 times a week—is called “Basic Spanish.” Yesterday Roy translated the first part of a fairly long text from the “Basic Spanish” book, which I’ve divided into three parts, one per day, to make the work more manageable. (Lulu hasn’t begun this task yet because she’s been so busy this summer.)

Here is the Spanish text… 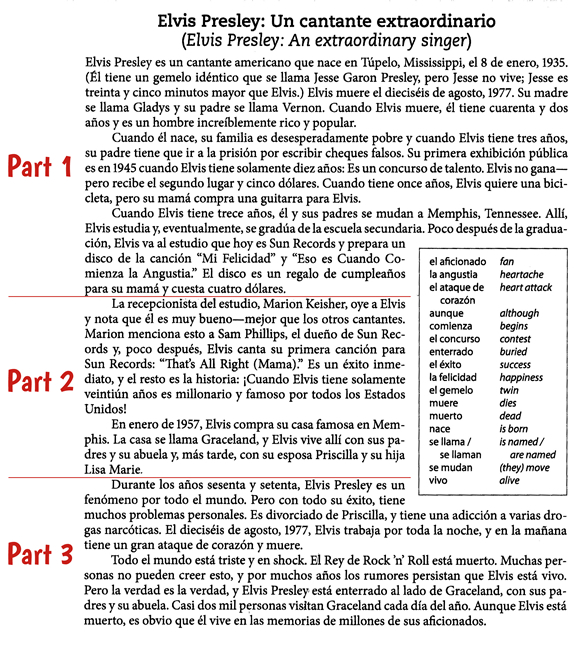 And here is Roy’s translation of Part 1, both his original writing and my typed version (exactly as he wrote it, with errors), which may be easier to read. (His handwriting is much neater when he’s doing schoolwork!) 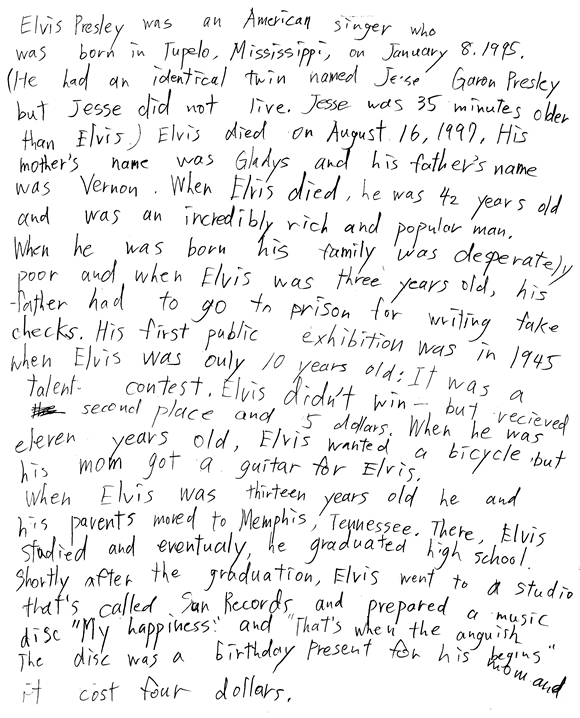 Elvis Presley was an American singer who was born in Tupelo, Mississippi, on January 8, 1995. (He had an identical twin named Jesse Garon Presley but Jesse did not live. Jesse was 35 minutes older than Elvis.) Elvis died on August 16, 1997. His mother’s name was Gladys and his father’s name was Vernon. When Elvis died, he was 42 years old and was an incredibly rich and popular man.

When he was born his family was desperately poor and when Elvis was three years old, his father had to go to prison for writing fake checks. His first public exhibition was in 1945 when Elvis was only 10 years old: It was a talent contest. Elvis didn’t win—but recieved second place and 5 dollars. When he was eleven years old, Elvis wanted a bicycle, but his mom got a guitar for Elvis.

When Elvis was thirteen years old he and his parents moved to Memphis, Tennessee. There, Elvis studied and eventualy, he graduated high school. Shortly after the graduation, Elvis went to a studio that’s called Sun Records and prepared a music disc “My happiness” and “That’s when the anguish begins.” The disc was a birthday present for his mom and it cost four dollars.

As your children grow, I encourage you to look for opportunities where you can exercise their writing ability by giving them short texts to translate from the majority language or another minority language. Translation tasks of this kind—using texts from picture books or textbooks, or even composing your own engaging passages—will not only stretch your children’s writing skill, it will enable you to better grasp areas of their language ability that may need further attention.

Moreover, these opportunities will give your children the chance to practice the really valuable, real-world skill of translating and interpreting from one language to another, a skill that can be of tremendous value to them, and to many others, throughout their bilingual or multilingual lives.

[stextbox id=”comments”]How about you? Could you engage your children in translation tasks on a regular basis, even from a fairly young age?[/stextbox]