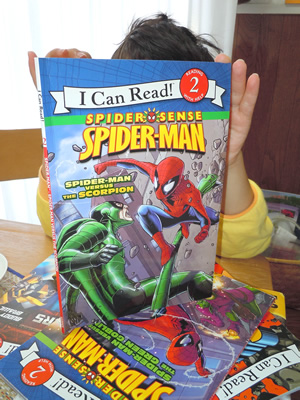 Today I’d like to follow up on an article I wrote a few months back about fueling your children’s passions. In that post, I stressed the idea of actively nurturing a child’s natural passions via resources in the minority language, like books, DVDs, and CDs. Because at the same time we’re fueling those passions, we’re fostering greater language exposure and proficiency.

As an example, I mentioned 5-year-old Roy’s love of super heroes and how I planned to give him some books about super heroes for Christmas.

Well, I’m happy to report that he paws through these books regularly and, because of his strong enthusiasm for the subject, he’s even pushing himself to read a pretty tough book about the Avengers.

“Many villains were jealous of the Avengers’ success and wanted to destroy the team. Evil forces tried to create disharmony within the group, and for a while they succeeded—the Super Heroes disbanded! However, a long and terrible siege in Asgard, led by the Super Villain Norman Osborn, eventually brought the team together again.”

But that’s not all. This week something happened which made me realize that I can be even more strategic about nurturing my children’s interests—even more active beyond obtaining resources like books, DVDs, and CDs—and therefore even more successful in fostering their minority language development.

And it has everything to do with a new super hero named “Brick Man.”

Okay, here’s what happened: Roy and I were in the living room, huddled by the heater. He was reading his Avengers book, and I was explaining the vocabulary he didn’t know, when the conversation turned to where all these super heroes came from in the first place. I mean, you and I realize that someone, somewhere invented these super heroes—their appearance and powers and background—but this is an entirely new concept to a small child. And when I revealed this fact to Roy, and suggested he could do the same—he could create his own super heroes, too—his eyes grew wide and I practically saw sparks leaping from his little head.

Not long after that, I was back here in my tiny office when he came bursting in, waving a picture with excitement. Brick Man was born!

Brick Man, he eagerly explained, is a good guy and he’s battling Punch Man, who’s about to brain him with a merry-go-round. Brick Man, he told me, stops the bad guys by shooting hot gobs of…hot gobs of…

Hey! What’s that stuff you use to stick bricks together?

Now you can’t blame Roy for not knowing the right word. After all, I bet the only 5-year-old boys who know the word “mortar” are the sons of bricklayers.

So I fed the word to him and he chattered on, relating the whole dramatic story of Brick Man and Punch Man. (Don’t worry, Brick Man won the battle—but I’m afraid the merry-go-round is now a sticky mess.)

Then, after Roy caught his breath, he wanted to know how he could turn Brick Man into an animated TV show, like the shows with super heroes that he watches religiously on Sunday morning.

Since I’m not sure he’s quite ready to open an animation studio, I instead steered him in a different direction, explaining that super heroes first appear in comic books. So I planted the seed: How about creating a comic book about Brick Man?

Do you see what happened here?

It’s true, the word “mortar” may not be particularly useful in daily conversation (“Hi, John! How’s your mortar?”), but in this little story about Roy, it’s a symbol of how we can expand the boundaries of our children’s minority language by making a conscious, strategic effort to encourage and engage with their natural passions. In Roy’s case, it’s much more than “mortar”: not only did his little bilingual brain construct, and express, a whole narrative in his minority language, he’s now motivated to create a comic book, too, which will stretch his drawing and writing ability.

My advice? (Besides making sure your mortar is stored in an air-tight container.)

Ask yourself regularly, since a child’s interests will naturally evolve over time: What are my children’s passions right now? Then actively try to fuel those passions with resources in the minority language as well as related ideas that could help push the bounds of their language ability even further. Because, in the end, the more language exposure you stimulate, and the more enjoyable that exposure is, the more proficient your children will ultimately be on this long bilingual journey.

P.S. You know, parents raising bilingual kids are kind of like super heroes, too! I salute you, fellow Avenger!

How about you? What are your children’s passions? What do you do to fuel those passions in the minority language?