How Many Steps is the Bilingual Journey? (With Revealing Photos and Video!) 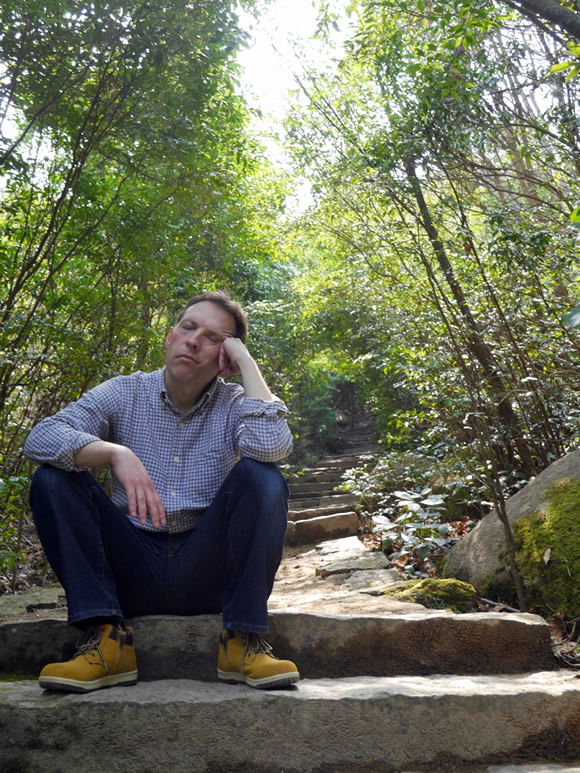 Okay, let’s say the bilingual journey lasts from birth to age 18—that’s 18 years, or 6570 days. (After that, our children are on their own and we can adjourn to our hammocks.) Now, if each day can be considered one step, that equals 6570 steps for the whole journey.

But there’s a catch, too.

These steps don’t usually head off into the horizon over flat land. No, for most who travel this way, these 6570 steps go up, up, up the side of a great, rocky mountain.

These were my thoughts the other day as I sat brooding halfway up Mt. Misen, the mountain which looms above the well-known island of Miyajima. Though I’ve lived in Hiroshima for many years—and Miyajima is less than an hour from Hiroshima by train and ferry—this was the first time I had tried to climb it.

“Come on, Dad!” my eight-year-old son called. He had just snapped my picture and was eager to continue climbing.

I was eager to continue sitting.

I can’t say there are 6570 steps up the side of Mt. Misen, but it certainly feels that way. The stairs rise endlessly, more than two kilometers from the base of the mountain to its peak. And the truth is, I’m more of a lazy house pet than a lean beast of the forest. I mean, I like nature and everything, but I’ve never had much stamina. I was a sprinter in junior high, not a long-distance runner—and even then, I frequently hid in the bathroom during track practice so I could avoid at least some of the dozens of laps we had to run each day.

But there was nowhere to hide now. I was on the side of a mountain, my son urging me to stand and stagger onward. I suggested several reasonable alternatives—only half in jest, frankly—but he shot down each one.

“Why don’t we sit here and sob for a while, then some super hero will come along and carry us to the top?” (There are no actual super heroes, he said.)

“Okay, how about if we just start a new life in the forest? We can be the wild men of Mt. Misen, living with the deer and the monkeys.” (This idea appealed to him, but he was worried about finding food, especially snacks.)

“Then why don’t you go on without me? When you finally get home, tell Mommy and Lulu where I am and they can come and rescue me.” (He doubted they would look for me in the forest after dark, even with flashlights.)

One step at a time

Finally, I rose on quivering legs and continued to climb, one step after the next. If I just focused on the next step, I muttered, then the next, I would make progress and eventually reach the peak. (Though I did wonder aloud if this might be one of those dreams where the task is never-ending.)

In fact, one step at a time was all I could manage, anyway. I mean, it wasn’t possible to cover more stairs than that in a single stride (without tearing a groin muscle or something). And when I needed to rest, well, I would rest. I would sit down and moan for a moment, then I would rise again and go on.

The bilingual journey is no different, really. There may be 6570 steps, and they may be heading up the side of a steep mountain, but to cover this ground, you only need to focus on one step at a time, one day at a time. Each step takes some effort, it’s true, but if you simply plod on, with patience, perseverance, and as much playful joy as you can muster (and with moments of rest, as needed), the larger journey, and the greater goal, will inevitably be realized.

In this way, step by step, I reached the top of Mt. Misen. It took two and a half hours—and another two hours to get back down to civilization (tireless Roy again romping far ahead of me)—but I did it. And though it was an exhausting hike, and my legs felt like limp linguini when I reached the bottom, the experience of that day—the rewarding adventure I had with my son—was well worth every bit of the effort it took.

And let me stress again—as I first suggested in How Nearly Getting Myself Killed by a Kite and Having to Pay a Parking Ticket for $150 Helped My Children’s Bilingual Ability—that even the more difficult experiences we face, if we experience them with our kids in the minority language, become significant successes from the point of view of language development. The time I spent with Roy trudging up and down that mountain not only enriched our father-son bond, the intensive one-to-one exposure in the minority language enriched his bilingual ability, too.

Revealing photos and video from Miyajima!

To share our adventure in full color, here are more images from that day. Enjoy!

The famous “floating” shrine gate just offshore. At low tide (in the late afternoon), you can walk right out there on the soggy sand and touch it. 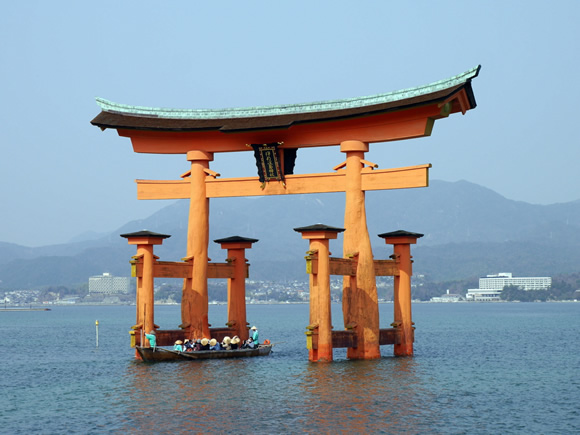 To reach the mountain peak, just follow this path, uphill, for over two kilometers. 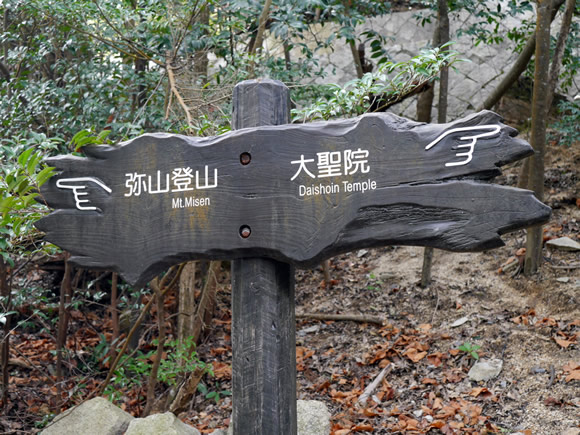 Ready to climb thousands of stairs? 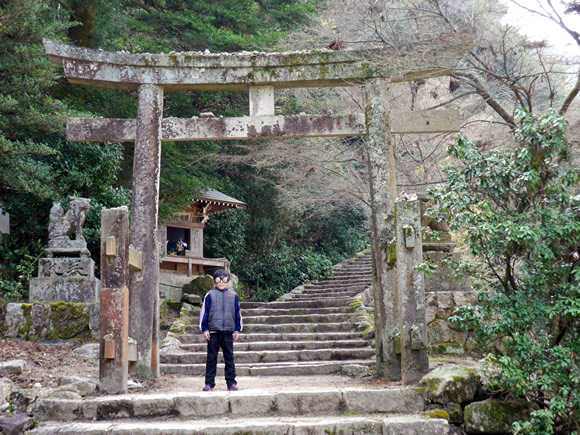 Pleasant waterfalls await you near the bottom. 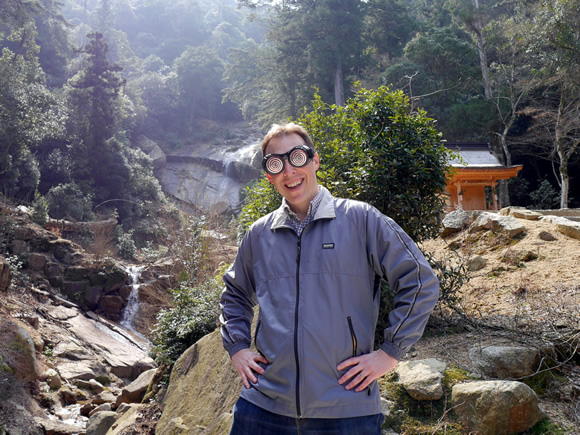 But then you face the endless, unforgiving stairs… 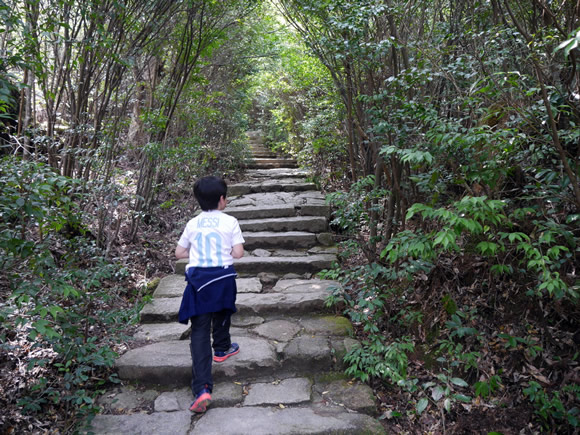 …which stretch into the sky. 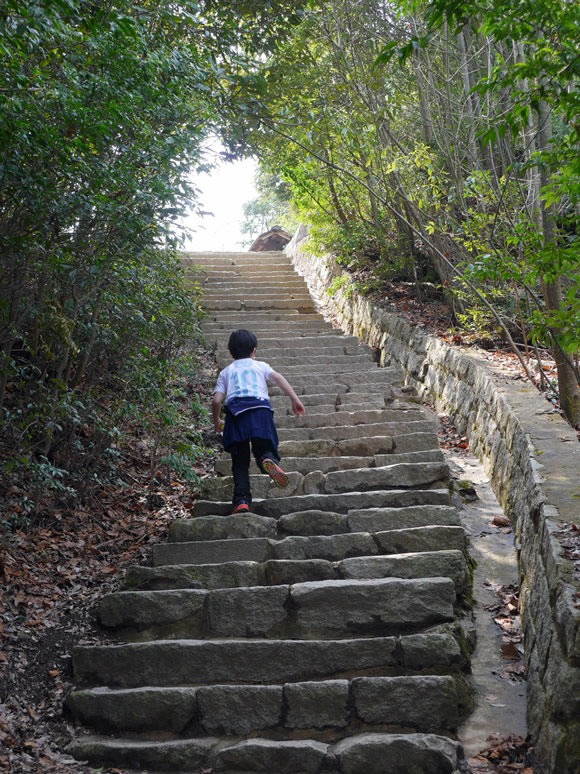 Closer to the top, we came across this small deer. Miyajima is known for its deer, which have become accustomed to people. 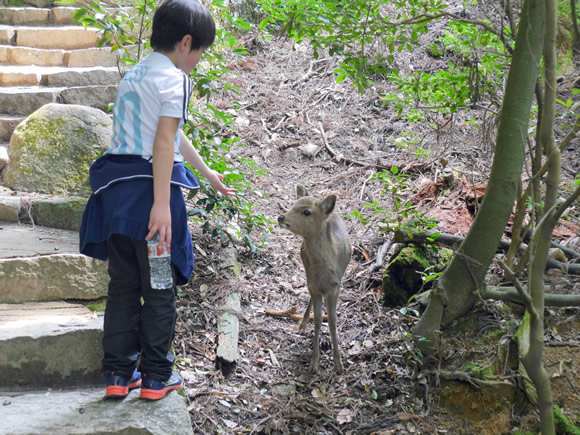 Did you know deer like egg salad sandwiches? (For more pictures of me cavorting with wild animals, see 50 Activities with Animals to Engage Your Bilingual Kids in the Minority Language.) 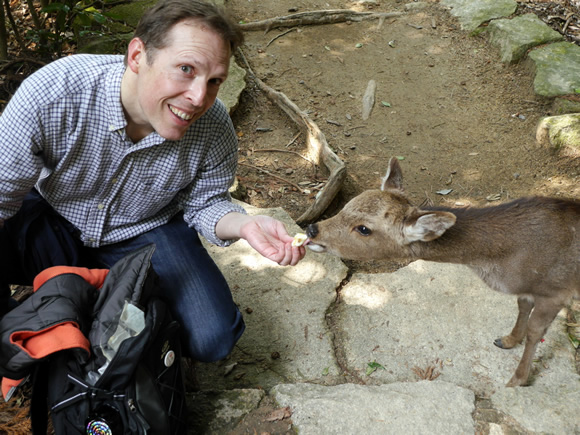 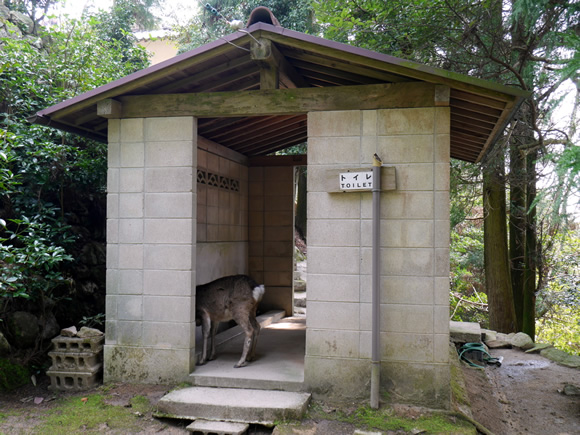 This little guy urges you toward the top. 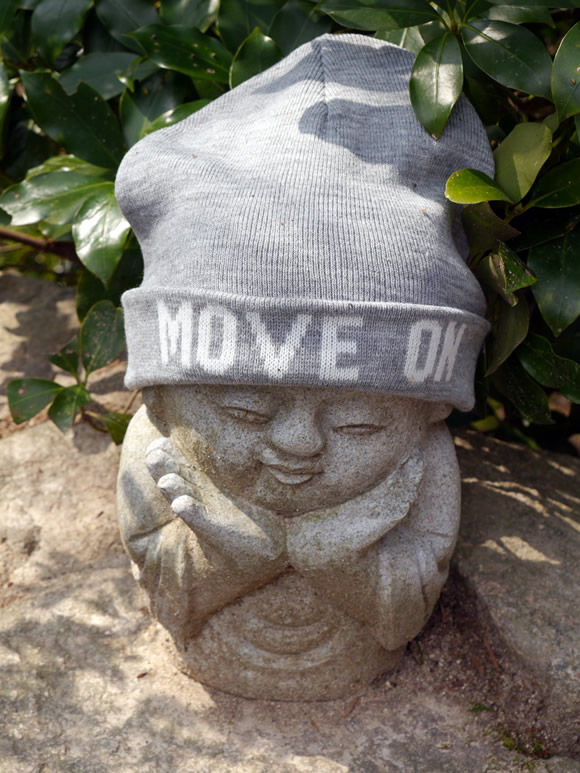 I found these wise words nearby, which suit today’s theme. 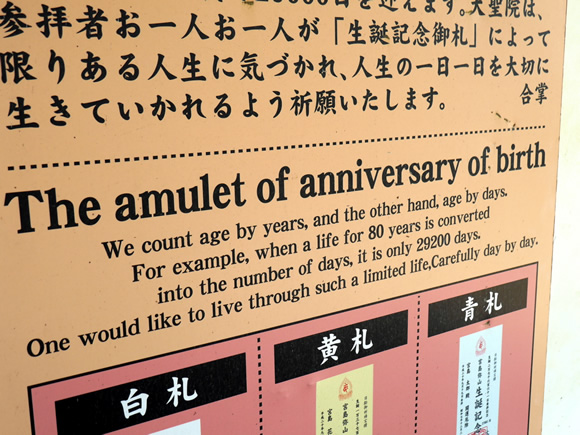 Roy takes a well-deserved rest at the summit. 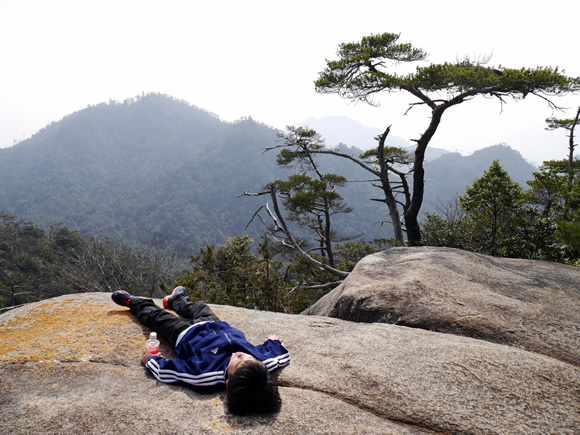 After enjoying the wonderful view, and what was left of our egg salad sandwiches, we headed back down along a different trail. 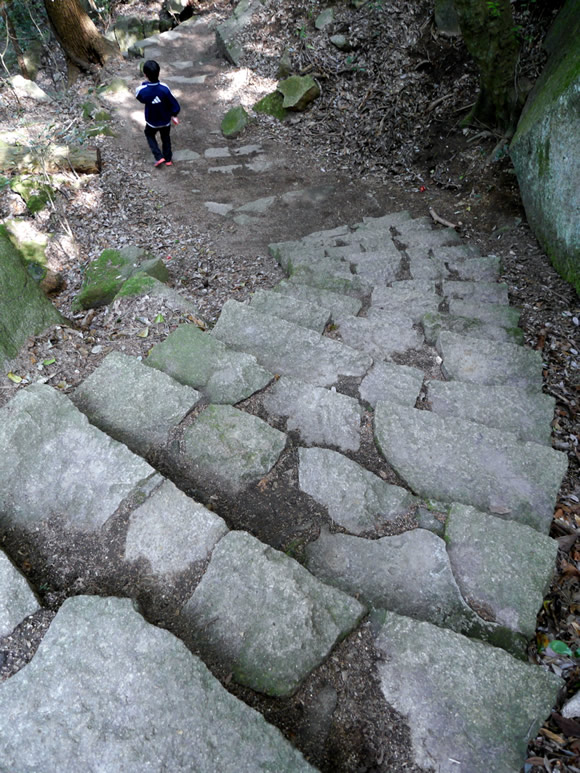 But even the path going down was dotted with stairs going up! 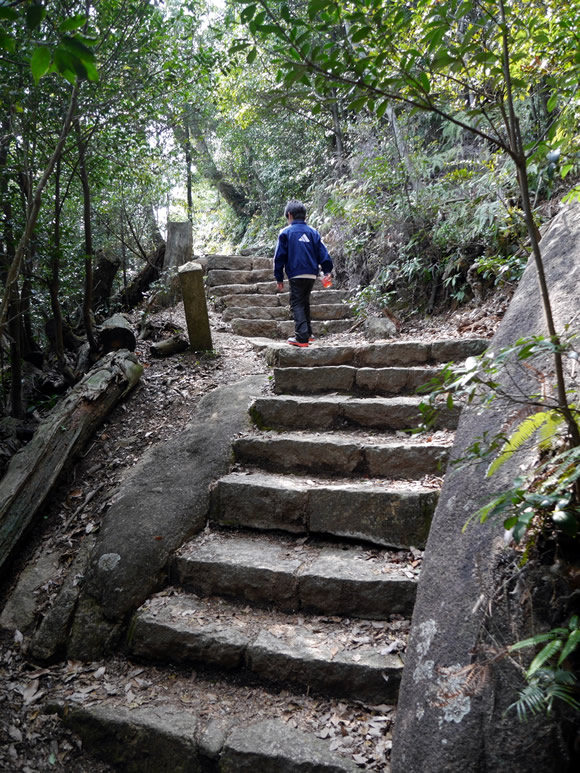 The forest is gorgeous, with huge rocks and trees. 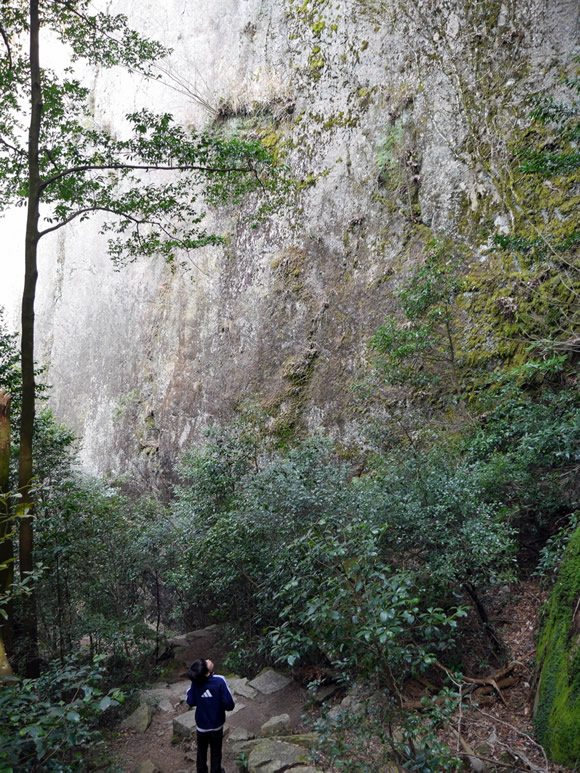 This is an unusually high step, isn’t it? 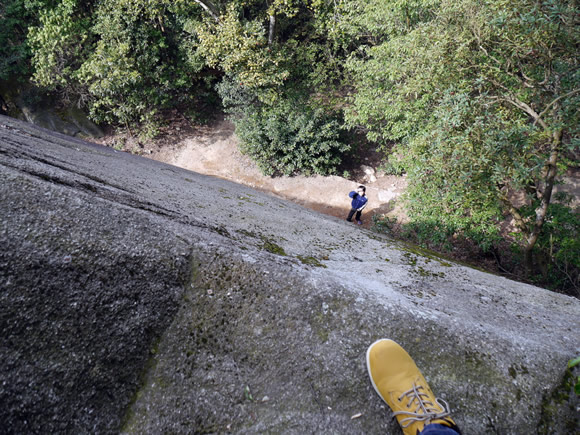 We finally hit flatter land, to the accompaniment of frogs singing in a stream. 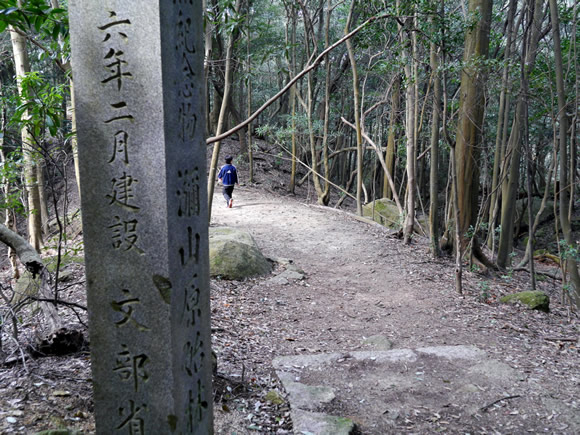 I’m almost at the bottom, and ready to purchase a new pair of legs at the gift shop. 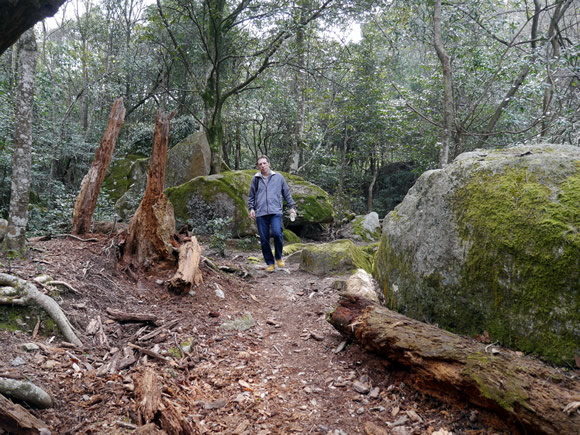 Because the deer like egg salad sandwiches (and anything else that’s edible), they immediately respond to the sound of crinkling plastic, which they associate with plastic bags and food. 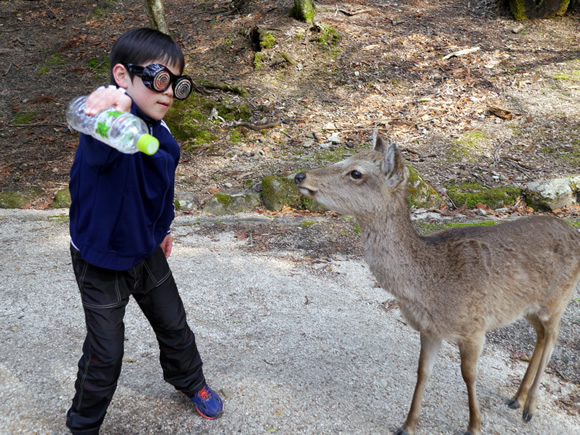 With his plastic bottle, Roy quickly became a “deer trainer.” 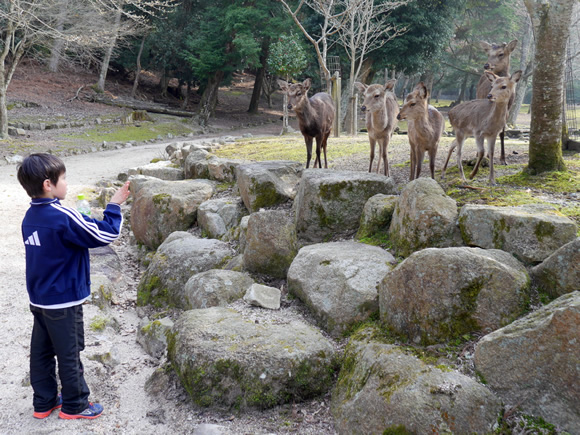 And, finally, here’s a fun video which shows how excited the deer get over the sound of plastic!

PrevPrevious50 Activities with Animals to Engage Your Bilingual Kids in the Minority Language
NextWARNING: Do Not, Under Any Circumstances, Read This Blog Post About Raising Bilingual ChildrenNext