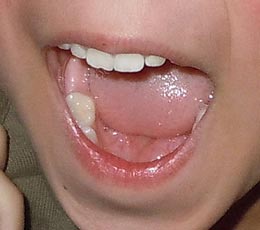 When my son gets home from school, he has a habit of stripping off his clothes and strutting around the house stark naked.

My wife finally chases him down and puts pants on him, but yesterday she was outside, working in the yard, so he was free to prance about in his birthday suit longer than usual.

This led to a very funny scene where he was standing there with his scrawny 6-year-old physique and shouting at me for several minutes, manically reeling off a ridiculous story that featured his father as the main character. (Something about a buffalo attacking me with its big, hairy buttocks.)

You see, recently I’ve been encouraging a new activity with Roy—let’s call it “Storytelling Duel”—where parent and child do battle by telling wild tales about the other in the minority language (in our case, that’s English). Not only does this activity promote non-stop use of the target language, it frees the imagination completely and becomes great fun for the players and onlookers.

When Roy and I are locked in playful battle, and he’s determined to outdo my own outlandish tale about him, his loud, feverish storytelling is a riot.

If you have a lively younger child with some ability in the minority language, here’s how you can hold your own “Storytelling Duel”—and get him talking his head off.

How to improvise a story
If you’ve never improvised a story like this before, it’s actually easier than you think. And that’s the thing: you can’t think. You simply have to start talking, and keep talking, speaking as quickly as you can, just adding whatever pops to mind.

In fact, smaller children are able to do this quite naturally, because they aren’t worried about the story “making sense.” And you shouldn’t be either. Just start with something like “Roy, you were walking home from school and a big pigeon swooped down and started pecking you on the head…” and then just keep going, one silly event after the next. If it doesn’t all hang together like a “real” story, it doesn’t matter, but you’ll probably discover that it does form a coherent shape, of sorts.

The key, again, is speed: your mouth has to move faster than your brain so you don’t pause and ponder and let the story peter out. If you burn through the story, improvising freely, you’ll find that your imagination is with you all the way, supplying the next chunk of the tale. And when you do need a prompt, simply repeat “And then…” and take the first thing that comes to mind. Go on in this way and the story will basically “tell itself” until you reach some kind of conclusion.

How to stage a duel
Of course, you could tell any tales you like, but what makes “Storytelling Duel” such an engaging activity for us is its “competitive edge.” In effect, we’re trying to top each other by telling the most outrageous story we can about our “opponent.” This is why Roy gets so excited: he feels free to reel off the wildest story about his father that he can possibly imagine because—and this is important—I’m not censoring anything he says. At his age, bodily functions are often a focus of the perils he creates for me, but this is fine within the context of the activity. If you start censoring what you or your child can say—as long as it doesn’t become profane or hurtful—then your imagination won’t flow freely.

To begin a duel with your child, I suggest introducing the activity and then launching into your own story first. By spinning a long, outlandish saga which features your child in a string of “disastrous” situations, you’ll be encouraging your child to do the same about you when it’s his turn. The stories may stop after just the first round, or perhaps you and your child will be eager to continue with additional rounds.

A variation of the turn-taking contest is the “free for all,” where the players simply fire their stories at the same time. This involves a lot of shouting and laughing, as parent and child try to top the other both in volume and absurdity. It’s true, taking turns is more effective as language practice, but the “free for all” can be a lively variation.

In a way, “Storytelling Duel” is an “advanced” technique, as it does demand a special effort from both parent and child. Still, it’s an activity that most any family, given the desire, could use very effectively to encourage extended use of the minority language with school age children.

At the same time, it’s a lot of fun for everyone—including other family members looking on—and the actual experience of improvising stories on the fly is exhilarating once you jump from the cliff and let your imagination soar.

For more articles on storytelling and the bilingual child, see…
The Importance of Stories and Storytelling in Raising Bilingual Kids
Strange-But-True-Tales: Baby Chicks in the Bathtub
Using Made-Up Memories to Engage Bilingual Kids