How Fighting Like Furious Monkeys Can Benefit Your Bilingual Kids 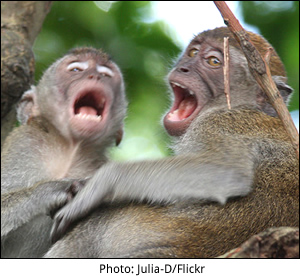 Something happened on Sunday morning that I’m eager to share with you.

I was taking a shower when I began hearing some loud clomping sounds that went on and on, for a good five minutes. Because we live in a townhouse—our unit is downstairs and a family of noisy neighbors is upstairs—I first thought it was their little boy, who’s often romping about like a pony above our heads.

But when I finally stepped out of the shower, I realized it was actually my own children, chasing each other around the house in mad fury as my wife calmly washed dishes in the kitchen.

Keiko and I respond to these shrieking fights in very different ways: she often ignores them and lets Lulu and Roy somehow work it out between themselves; I either bellow for them to stop or I burst out laughing. (Or both.)

Now I know laughter probably isn’t the best response—and Keiko scolds me when I do it—but it’s so hard to keep a straight face when dealing with their comical battles, which tend to snowball from the smallest, silliest things.

Sunday’s blow-out, for instance, began when Roy put his shirt on backwards.

This time, however, after handling it in my typical fashion—booming “STOP!” and then laughing—I did something else, something new. And it turned out to be a method that not only may help reduce the regularity of warfare in our home, it can benefit their language ability whenever conflict does erupt.

Fighting in a positive light

In the past, I never viewed this bickering in any kind of positive light. My aim was only to shut it down and restore a reasonable peace in our house. Even when I did have the energy to try fleshing out what prompted the fight, the kids were still too wound up to talk about it without squabbling, and I was too impatient to make effective use of the opportunity.

I don’t know why, but on Sunday I had a new impulse: once they calm down, have them tell me exactly what happened.

And so, after I stopped the fight, I had them sit and work on some letters to pen-pals to cool off. A few minutes later (and after I finally got dressed!), I called them into my little office, individually, to hear each side of the story.

By this time it had dawned on me that here was a good chance, as well, to exercise their language ability: to explain what triggered the fight, they would have to produce a full narrative of the events.

“Tell me what happened,” I said to them, in turn. Then I sat back and listened, occasionally probing for further detail (and chuckling frequently, I just couldn’t help it).

Finally, I was able to piece together a pretty good idea of what occurred…

“Your shirt is on backwards”

They were getting dressed, jockeying for position in front of the heater in our living room, when Lulu said to Roy, no doubt in a mocking sort of tone, “Your shirt is on backwards.”

“No, it’s not!” Roy responded, defending his honor and punctuating his words with a punch in the air, toward Lulu.

Lulu struck back by whipping Roy with her pajama bottoms.

Roy lunged for Lulu, but Lulu sprang to her feet and Roy gave chase. Another battle of tit-for-tat—which had broken out over a backwards shirt—would then rage for the next five minutes and climax in a fireball of screaming and crying.

Taking advantage of these times

After I spoke with them individually, I brought them together and recounted the story I just shared. At that point, their emotions had cooled and they were able to see the absurdity of the conflict, too. In fact, as I told the tale of their fight, blow-by-blow, they began to laugh, finding it just as funny as I did.

Will this newfound perspective—a clear-eyed look at the looniness of their behavior—serve as a kind of breakthrough in their daily rivalry? That’s probably wishful thinking, as I don’t expect the fighting to end. Still, I do plan to point to this experience as a reminder, when the next nutty fight flares, and underscore the moral that we discussed on Sunday: Don’t provoke each other. (They learned the word “provoke,” too!)

The experience, though, has been a big breakthrough for me. It’s now a touchstone for taking advantage of the opportunity these times present: by having my kids calmly describe their fights, not only will this reinforce the broader, lighter perspective they glimpsed on Sunday (which I hope will make them more conscious of their actions before a small tiff becomes a free-for-all), it will surely benefit their ability to relate a narrative in English, their minority language.

[stextbox id=”comments”]How about you? What has been effective in your home when it comes to handling clashes between your kids?[/stextbox]

PrevPreviousCan Children with Special Needs Be Bilingual?
NextRidiculous Riddles 4Next