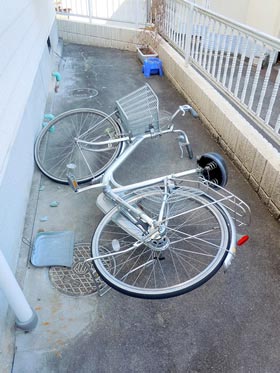 This week a typhoon roared over Japan. I didn’t blame my kids for the typhoon, mind you, but I did blame them for something connected to it.

Fortunately, western Japan, where we live, wasn’t hit so hard by the storm, but the wind was gusting pretty fiercely on Tuesday night. In fact, the next morning when I woke up I found my bicycle blown over on its side, like in this picture.

Then, as we sat down for breakfast, I fixed my kids with a stern look and I said:

“Okay, who pushed over my bicycle last night?”

Lulu: (laughing) It was the wind!

Roy: (laughing) Yeah, it was the wind!

Roy: We didn’t do anything!

Me: Maybe you did it together!

Lulu: It was the wind!

(Roy tries not to smile.)

Me: You did it, didn’t you? You got up while everyone was asleep, you crept outside in your pajamas, and you pushed down my bicycle!

Roy: Maybe I did! Your bicycle is dumb!

Me: And then you went all over the city pushing down people’s bicycles, didn’t you? I bet there are thousands of bicycles out there on the ground this morning. And you were the one that knocked them down! Oh, when the police find out what you did, you’ll have to go to jail!

Roy: The police can’t catch me! They’re dumb, too!

You see, when you blame your kids for things they didn’t do, it stirs a lot of lively interaction. And, as always, the more interaction you can prompt in the minority language, and the more engaging that interaction can be, the more you’ll fuel your children’s language development.

As in this scene at breakfast, the “blame game” starts with a silly accusation. I suggest spinning the scenario that your kids got up in the middle of the night, while everyone was asleep, to make their mischief. Children seem to love the idea of doing sneaky things at night, instead of being little angels in bed.

Your accusation is actually a playful invitation to take part in a bit of make-believe, a form of storytelling, a moment of theater. And when a child accepts that invitation, and even gets into the spirit of things by “confessing” to the crime (as Roy did), this expands the possibilities for interaction even further.

So the next time something goes wrong in your house…

More fun ways to prompt interaction in the minority language…

PrevPreviousMaking Science a Bigger Part of a Bilingual Child’s Life and Language Development
NextIs It Too Late For My Child to Become Bilingual?Next