ADAM’S NOTE: Over the past few years, Tiara Harris has sometimes shared video clips with me of her super-cute kids speaking Japanese and I came to admire the very proactive efforts she is making so that she and her children can both become bilingual in this language and their native English. As a result of the success she’s experiencing, Tiara is also becoming a growing force at YouTube with a variety of helpful and appealing videos at her Chocolate Sushi Roll channel. Thank you for sharing your encouraging story with us, Tiara! And keep up all your good efforts, for your family and for families out in the world! 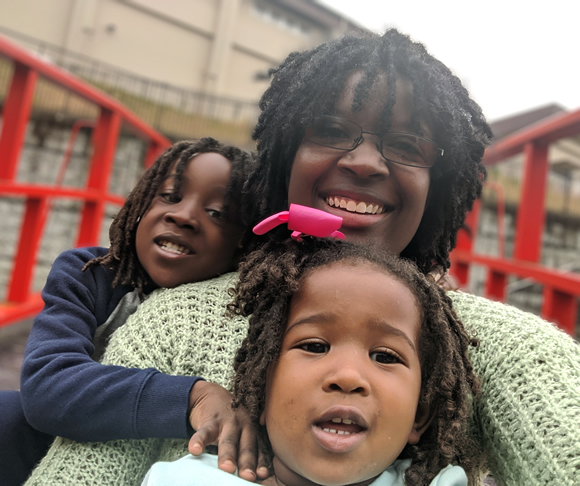 Tiara Harris is a native English speaker from the U.S. state of Georgia raising two bilingual children. As a military family, they frequently must relocate, but Tiara is determined to maintain the goal of having a bilingual family. Currently, they live in Japan and Tiara is making efforts to foster her young children’s ability in Japanese while studying Japanese herself and teaching English to Japanese children. She created a YouTube channel, called Chocolate Sushi Roll, to inspire other monolingual families to be brave and take the leap toward bilingualism.

If you had met me four years ago, I could only have greeted you in English and (maybe) Spanish…from the few Spanish words I learned from sleeping through my Spanish class in high school. I wasn’t interested in learning another language and never realized the opportunities and depth that can come with it.

I am—well, was—a monolingual mom from a completely monolingual family. We’re a military family and, to our dismay—at least at first—we became faced with relocating to Japan. To be honest, I dreaded going and was even refusing to go until one month before the move because I love living in America and I wanted to stay close to my family. But my husband urged me to come with him so he wouldn’t have to be stationed in Japan by himself.

So we went to Okinawa in 2014 and we were there for two years. I became a tour guide for Americans and learned about the culture and history and a lot of fun facts for the 30-minute bus tours. But I still had no interest in learning to speak Japanese.

Then, during our second year in Okinawa, we were blessed with a baby boy, Jason.

And my whole perspective changed.

At that point, because Jason was born in Japan, I decided that he should speak the language. And, in fact, before I even realized it, this was already starting to happen. I had been taking Jason to baby play classes with native Japanese mothers and their babies. One day I noticed that when the teacher said to clap, Jason clapped. And when the teacher said to clean up, his little hands started reaching to clean up. I was so surprised! This baby is learning Japanese!

By then, though, Jason was already a year old and it was time for us to return to America. And I was now pregnant with a baby girl. 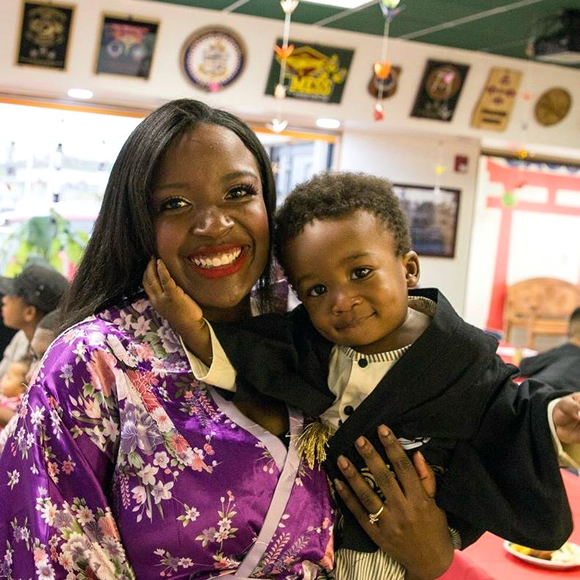 In America, Jason continued to use Japanese words. My goal then became for us to be a bilingual household and become fluent in Japanese. I didn’t want Jason to lose this gift. So I began studying hard and trying to speak Japanese with my children each day. When I couldn’t find the words, I used books to help me say what I wanted to say. For instance, if the mother in a story used a certain phrase when she told her children to clean up, I would do the same. I wrote these phrases in a notebook and used them with my children at the appropriate time.

I realized that I didn’t need to be fluent to help my children learn Japanese. I just needed to stay one step ahead of them.

At first I started with the simple question-and-answer pair: “What’s this? It’s a _____.” In this way, making use of children’s books and my smartphone, we were able to build our vocabulary and achieve a baby’s range of language development. Next, I researched what native Japanese families use to engage their children in the language. It’s important for me to cover the sort of words and expressions that Japanese children actually use, which can’t easily be found in a textbook. So I ordered the Shimajiro Kodomo Challenge, a monthly subscription that includes age-appropriate toys, stories, a DVD, and activity books. I studied these materials and used them with my kids. We also had the chance to be a homestay family for some Japanese high school students. It was only for a weekend, but we enjoyed every minute of it and we hope we can host more Japanese students in the future. 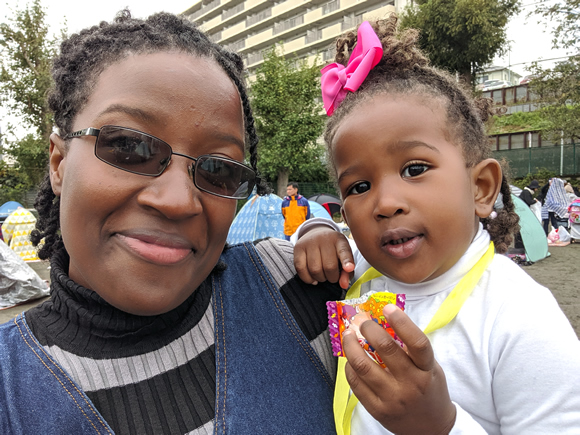 Typically, there are no children of other nationalities at these Saturday schools. But Jason passed the interview process and was accepted. It was a proud mama moment for me! I then drove four hours, round-trip, every Saturday so he could attend. The class for four year olds was only 90 minutes long, with play time at the park afterwards. I was praying that my husband would be able to get us back to Japan because Jason was expressing the desire to go to a real Japanese school. He really enjoyed the program and being around other kids who spoke the same two languages as he did. 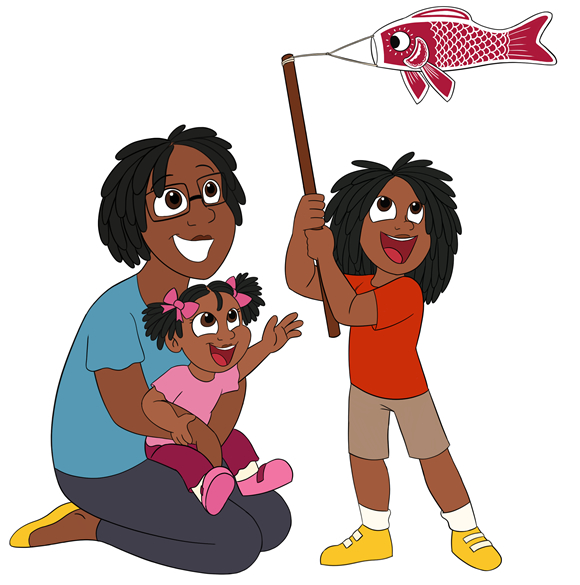 Heading back to Japan

Earlier this year, we got the good news: We were returning to Japan! Although the spots were limited, when people learned about Jason, it was a unanimous decision. And that one decision will forever affect Jason’s (and his little sister’s) future.

So Jason is now enrolled in a Japanese preschool. No one speaks English there, but Jason fits right in with the other kids. It’s hard for people to believe that we just arrived in Japan in March because he speaks like a native Japanese child. I’m still working hard on my own Japanese, but hopefully in another year I’ll have made enough progress to start introducing some Spanish, too. 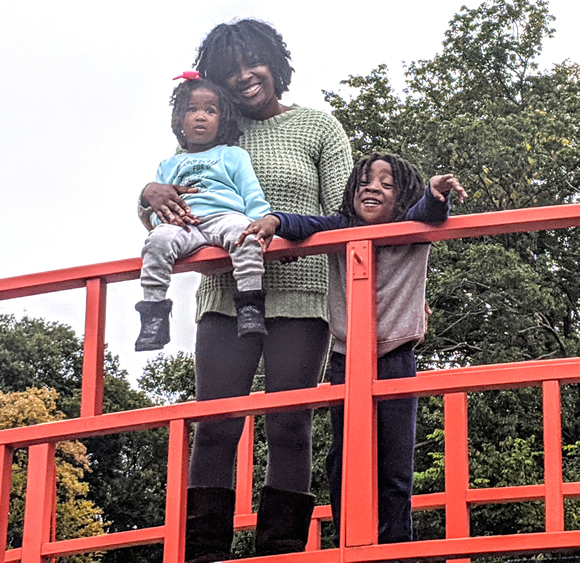 When I first began our bilingual journey in 2015, I couldn’t find a lot of information about people in our sort of situation. Most families seemed to have a native-speaking parent of the target language. But our case was so different. I didn’t know much Japanese myself, but I was determined to teach my children Japanese while we were living in America. Day after day, I did what I could with books, our subscription for children’s materials, and my own growing ability in the language. I would even travel to other cities for a play date in Japanese because I knew how important that interaction with other children would be. And every time we moved (as a military family we move a lot!), finding a Japanese community was always one of my highest priorities.

I recently started a YouTube channel, called Chocolate Sushi Roll, to inspire other monolingual families to be brave and take the leap toward bilingualism. In my videos, I tell monolingual families that any parent is capable of teaching his or her child another language. I also try to empower bilingual parents to maintain their family heritage by teaching their children their native language. I hope my efforts can help other parents—and, in particular, parents in America—be successful in their bilingual goals.

[stextbox id=”comments”]How about you? What do you think of Tiara’s story? Feel free to share your thoughts with her by adding a comment below![/stextbox]