Have You Failed at Raising a Bilingual Child? 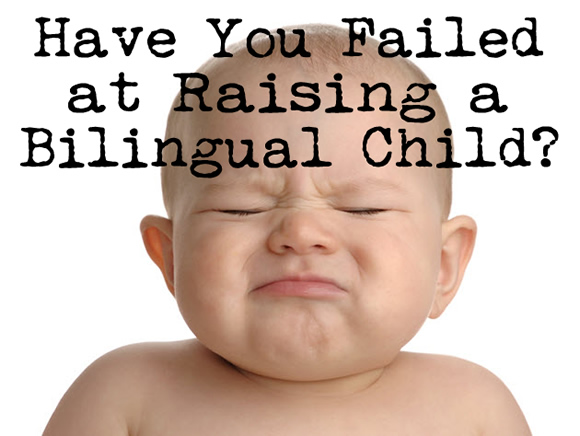 Lately, I’ve heard from several parents with the same concern: they feel that they’ve “failed” at their goal of raising a bilingual child. Because this feeling is so common—and can be so counterproductive—I thought I might share my perspective on “failure.” If possible, I’d like to help rekindle hope.

True, your child’s current ability in the minority language may not match your original hopes or expectations, but this isn’t “failure”—it’s simply the level of ability achieved to date. In other words, let’s properly put the stress where it belongs: on achievement. The fact is, you’ve already made substantial progress, I’m sure—maybe not progress that feels satisfying to the degree you’d like—but progress nonetheless. And whatever level of ability your child has achieved to this point can then be advanced as you move forward.

The tricky part is—and here’s what breeds the feeling of “failure”—much of this progress, especially early on, can’t really be seen if the child isn’t speaking yet, or tends to rely on the majority language to communicate. But if you’ve been making consistent efforts, you can be sure that knowledge of the minority language has been steadily growing inside the child’s mind. (See Important Thoughts on Babies and Hammers for a helpful metaphor.)

Frankly, the only way you could truly claim that you’ve “failed” is if your child makes no progress at all, despite your continuous efforts, over the course of 18 years of childhood! In this light, is “failure” even possible?

When your child’s level of ability doesn’t match your expectations, this isn’t “failure,” it’s “feedback.” Life is giving you a clear, constructive message: If you really want to fulfill those original hopes, you have to do more. (What “more” is obviously depends on each family’s particular situation.)

Make no mistake: life isn’t saying that you “failed.” That would be misinterpreting the message. Life is simply telling you to try harder if this goal is important to you.

At the same time, there’s no shame in resetting your expectations, and your aim, if you find that you’re unable to do any more than you’ve already been doing. In fact, it’s the wise step when the alternative would be ongoing frustration over an unrealistic goal. Remember (as I mention in Warning to New Parents Who Dream of Raising a Bilingual Child): You must be mindful of the actual size of this challenge and make certain that your efforts match the scale of your dream.

3. “Failure” is positive, not negative.

Viewed properly as “feedback,” this feeling of “failure” becomes a positive development that spurs stronger, more effective action. The problem, of course, is that such feelings often do the opposite: they sap our strength and undermine the efforts that now should be made, that would make a difference to our larger, long-term success. The irony is that, just when we have the chance to improve the situation, discouragement can keep us from grabbing this opportunity. (Remember the words of W.J. Cameron: “The last dejected effort often becomes the winning stroke.”)

Of course, feelings of disappointment are natural at times like these—when reality doesn’t match expectation—but if the greater goal remains important to you, you must rise again and brush off the dust. You must go on, bravely, boldly, confident that the more efforts you make, and the more effective those efforts are, the more distance you’ll ultimately travel through the years of your bilingual quest.

4. Passive ability is a significant achievement.

I understand how badly parents want their children to speak the minority language. For many parents, communicating with their children in their mother tongue, for the life of their relationship, is a deep, deep desire. (I share my own feelings on this in Why Communicating in English with My Kids is So Important to Me.)

Sometimes, though, the challenges involved in providing a child with sufficient exposure to the minority language, and a genuine need to use it—the two “core conditions” for active language ability—are simply beyond the capacity of the parent to meet. When this is the case, despite the disappointment, the parent should realize that even “passive ability” is a significant achievement. Although the child may not yet be ready to use the language actively, the more the parent can continue to expose the child to the minority language—thus persistently enriching the child’s passive knowledge—the more readily that passive knowledge can be activated in the future, when the time is right.

Again, don’t let discouragement prevent you from seeing the bigger picture, the larger arc, of your child’s bilingual development. Whatever efforts you can continue to make will surely pay off over the course of your longer journey.

The truth is, the only way to really fail at raising a bilingual child is to give up entirely. (Or follow my “advice” in the satirical post How to Fail Miserably at Raising a Bilingual Child.) If you give up, yes, I’m afraid you’ll fail. But if you don’t give up, if you go on and persevere, day after day, year after year, progress is guaranteed. How could it be otherwise?

“When you get right down to the root of the meaning of the word succeed,” said F.W. Nichol, “you find that it simply means to follow through.”

P.S. Keep in mind, too, in those lower moments of your journey, that You Are Not Alone.

PrevPreviousWhy I Don’t Want My Kids to Do Well in School
NextWhy Your Bilingual Child is Tied, Profoundly, to Hiroshima and PeaceNext