Haircuts, Soap Bubbles, and the Whole Meaning of Life in Under 700 Words 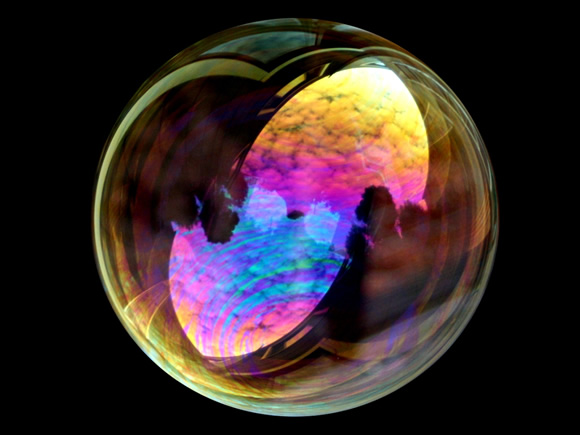 Sometimes creating a blog post is a conscious process—it’s something I plan and put effort into writing.

At other times, though—like this time—it’s almost as if life is telling me what to write, and I just follow orders.

And when that happens, whatever posts I had already been working on must stand aside for a moment and let this new post speak.

This week I got a haircut. Once a month, for the past six years, I go to the same little barbershop, just a few minutes on foot from my house.

The friendly Japanese man who cuts my hair is about my age, and he always gives a big grin when I slide open the door. He speaks no English, but we can chat well enough in Japanese. And when I bring Lulu or Roy along with me (they like sitting in the other barber chair), he welcomes them warmly.

When this sweet man was just three, he suffered a raging fever that destroyed much of his hearing. But with a hearing aid in place, and the speech he had already developed as a small child, he can communicate without too much struggle.

Still, in Japan—and I suspect this is particularly true in older days and in rural areas, where he grew up—it isn’t easy being “different.” I don’t really know what his youth was like, but I’m sure he faced his share of hardships.

One of these hardships, I imagine, was the difficulty of finding a partner because of his disability. In fact, he was single until early last year, when he suddenly announced, with a beaming smile, that he had gotten married.

Not long after, he happily told me that his wife was pregnant.

Each month when I went to his shop, I received regular updates on the baby. But last summer, despite the usual smile, he was clearly distressed. His wife, who had also gotten married at an older age, was now in the hospital. The baby wasn’t growing well.

That fall, though, he was again in better spirits. The hospital stay had apparently helped, and the baby was developing. The due date was in late November.

But in December, close to Christmas, he told me that the baby still hadn’t arrived. In an unusual twist, the doctors said that the baby’s slower development meant that it would be born late—over a month late, even.

Exhausted, but happy, he pointed to the large calendar on the wall. The due date was now in early January.

As I walked to his shop the other day, I looked forward to finally hearing the good news: the baby is here!

I slid open the door and he smiled. I waited. When I sat down in the barber chair, he leaned in and whispered: “The baby died.”

A good man endures a hard life, and this was probably the only chance he and his wife would get to have a child. It wasn’t fair.

I shared as much sympathy as I could, struggling for the right things to say in Japanese. But really, what could I say? What could I say, in any language, to make this awful fact any less awful?

Then he silently cut my hair, a small TV blaring a silly Japanese game show in the background.

I sat there feeling for him…and thinking of my own kids.

After I paid him for the haircut, and squeezed his shoulder goodbye, I walked home under a cold, gray sky. But down the street from my house, I came upon an astonishing sight and I stopped.

There, in a small park, was a tall grandfather and his tiny grandson, no more than two. The man was blowing bubbles, soap bubbles, for the little boy, who was dashing about, squealing and reaching for them as they floated into the air. Those fragile bubbles, floating, floating, so beautiful for a few brief moments…

The man saw me and smiled. I smiled back. The little boy waved.

Then I went home to appreciate every ounce of this fleeting life.

Can You See How Quickly Time Is Passing?

Thought Experiment: What Will Your Children Remember Most About You?

A Friend of Mine Died

PrevPrevious“I Spoke Both Finnish and English”: I Interview My Mother on Her Bilingual Childhood
NextHow Comic Books Can Give Your Kids Bilingual Super PowersNext