Fuel Your Child’s Passions and Proficiency in the Minority Language 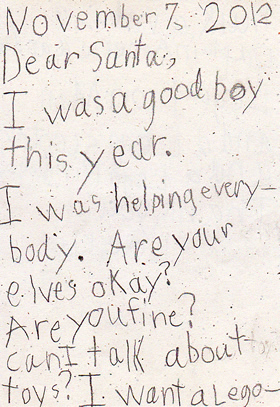 The other day Roy wrote a letter to Santa Claus. It starts like this…

…and then goes on to request a long list of Lego products, including several Lego action figures, like Captain America and Iron Man. (He found all these items in a crumpled Lego catalog he’s been carrying around the house with him for the past month.)

Now I don’t think he’ll be getting too many of those things (the prices in that Lego catalog nearly gave Santa a heart attack), but his letter clearly reveals two of his main passions at the age of five: Lego and super heroes.

In The Secret to Raising a Bilingual Child, I mentioned how I make a point of giving my kids books as gifts for birthdays, Christmas, and other special occasions. (I encourage family members and friends to give books to them as well.)

This Christmas, then, Roy may not receive a lot of Lego (he already has a lot of Lego), but he’ll no doubt find at least two English books with his name on them: one about building things with Lego, the other featuring such super heroes as Captain America and Iron Man. Because one important principle for raising bilingual kids is the idea of nurturing our children’s natural passions via resources in the minority tongue, like books, DVDs, and CDs. At the same time we’re fueling those passions, we’re fostering greater language exposure and proficiency.

The question to ask on a regular basis—and birthdays and Christmas are ideal times—is this: What are my child’s passions right now? (They’ll likely evolve, of course, as the child grows.)

With a particular interest in mind (Lego, super heroes, baseball, drawing, horses, spiders, fungus—whatever it happens to be), head to amazon.com or your favorite online store and explore the books, DVDs, CDs, or other items that could support that passion.

Of course, the age and language level of the child must be taken into careful consideration as well. Roy may love Lego, but if I choose the “wrong” book—something too sophisticated or too simplistic—he likely wouldn’t spend much time with it and the impact will be minimal. This is why searching at a site (like amazon) that provides the opportunity to examine actual pages from a book, and read reviews of previous buyers, is so crucial. When you choose the “right” book, on a subject that the child is already passionate about, the enthusiasm he feels for that subject will naturally motivate him to open the book—and thus advance his language development.

Seek out DVDs and CDs, too

I take a similar approach when it comes to DVDs and CDs. As you may have experienced yourself, dinosaurs are a source of great fascination to small children, and Lulu and Roy have been no exception. (In fact, through their interest, I’ve rekindled my own fascination with dinosaurs.)

Last Christmas, I sought a good DVD or two about dinosaurs and came across the marvelous BBC series called “Walking with Dinosaurs.” I ended up choosing the Ultimate Dinosaur Collection, which includes four DVDs, among them the amazing “Chased by Dinosaurs” where a zoologist “interacts” with various dinosaur species. These DVDs have been a big hit.

One more example from my family involves the English music we listen to at home and in the car. Because my kids are fans of such Disney shows as Hannah Montana, High School Musical, and Shake It Up, I regularly add to our collection of CDs when there are new releases. Music in English has been a mainstay of the language support I try to provide, and these CDs, since they’re tied to some favorite entertainment, have had a powerful impact. (See the post Great Music for Kids for many more suggestions when it comes to children’s music in English that parents can enjoy, too.)

Best of luck with your Christmas shopping this year! (And don’t tell Roy about those books, okay?)

How about you? What are your child’s passions right now? What kinds of minority language resources could help fuel those passions, and foster language development?