Do Your Bilingual Children Go to School in the Majority Language? 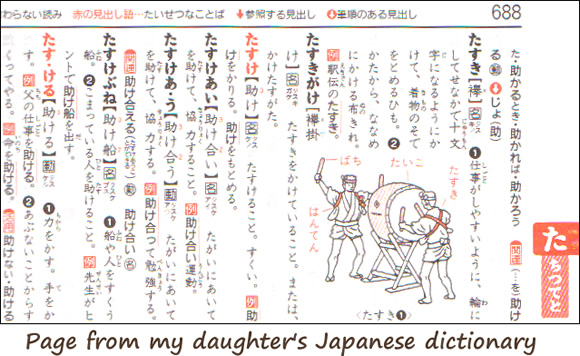 Last Wednesday I visited Lulu’s third grade classroom for “parents’ day” and a chance to observe a lesson. The truth is, I haven’t really taken advantage of these opportunities in the past. This is partly because of my work (though I work from home, I face deadlines as a freelance writer), but the other reason is that fathers in Japan generally don’t appear at these school functions. They aren’t barred from the school grounds or anything; it’s just that mothers are traditionally the ones who attend.

In fact, it didn’t really cross my mind to go on Wednesday, either, until after lunch when I saw my wife leaving the house with a friend. When she reminded me that it was “parent’s day” in Lulu’s class, I suddenly felt the impulse to take part, too. I’m not sure what it was—maybe just spring fever and an urge to play hooky on a sunny afternoon—but I’m glad I did. The experience was a powerful reminder of how important it is to be proactive in supporting a child’s minority language when the child attends school in the majority language.

It didn’t start on a promising note, though. After my wife left, I scrambled to get ready and hurried to the school (about 20 minutes on foot). But when I arrived, I realized that I had forgotten to bring a pair of slippers. Since outdoor shoes can’t be worn in most Japanese schools, I was forced to slink into the building in a sorry pair of gray socks with a hole in the toe. I found my wife outside the classroom door, among the gaggle of mothers, and the first thing she says to me is: “Where are your slippers?” And the second thing she says to me is: “You have a hole in your sock.”

When Lulu’s teacher opened the door, I was the first to dart in. I claimed a position in the far corner of the room (where no one could see my sock) to observe a lesson on using a dictionary. And as the lesson wore on, and I watched Lulu in her seat across the room, the enormous gap between her exposure to Japanese and her exposure to English became alarmingly clear.

Of course, I’ve always been aware of this gap, but I really felt it at that moment. All those hours Lulu has spent in this school—in first grade, in second grade, and now in third grade—suddenly became more real than they had been before. I imagined her there, day after day after day, soaking up Japanese at the expense of English.

What happened, I think, is that I experienced the difference between an intellectual understanding of this “exposure gap” and a more visceral realization. And though the intellectual idea alone might be motivating enough to maintain solid support for the minority language, I now sense that a direct, organic experience of this reality has even greater power to inspire action.

So if your children attend school in the majority language, I suggest making the effort to observe them in the classroom from time to time. Imagine them in this environment every day, for hundreds of hours every year, and how their development in the minority language depends on you being as proactive as you can to narrow the gap in language exposure to whatever degree is realistically possible.

The fact is, sustaining support for the minority language—particularly if you seek a high level of literacy for your kids—demands persistent energy each day, for many years, and times of fatigue are a natural consequence. Perhaps one way to strengthen motivation, and action, is by paying the occasional visit to school to see the hard reality of their exposure to the majority language with your own eyes.

From now on, I’ll make a point of doing just that.

If your children attend a majority language school, be sure to read these posts, too…

Help! My Bilingual Children Are Losing Their Ability in the Minority Language!

Watch Out for the Tough “Second Stage” of Bilingual Development

How about you? Have you had the chance to observe your children at school? What sort of impact did it have on you?