Do You Really Have Enough Resources in the Minority Language? (Hint: The Answer is Always “No.”) 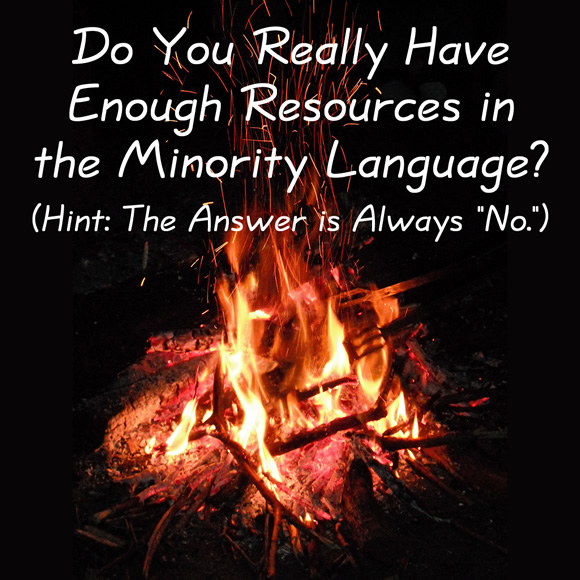 The work I do coaching parents to boost their success in raising bilingual kids is not only gratifying, it’s revealing. Lately, one recurring theme I see is a lack of resources in the minority language, an observation that isn’t meant as criticism of these families. Because in fact, I would say that all of us, to a smaller or larger degree, never really have enough resources in our target language.

Unless children are schooled in the minority language, and have ready access to a library full of books and other materials (and even a librarian to boot), I think this hunger for resources is unavoidable. After all, our children are continuously growing and maturing and new resources are needed on an ongoing basis to match their age, their language level, and their current interests.

In my case, for example, I’m now constantly searching for books that will fuel my children’s enthusiasm for reading independently. While I don’t always choose winners, my quest is relentless to meet the pace of their daily reading. If I don’t stay persistent by regularly bringing in fresh and fitting resources, their desire to read in the minority language will quickly decline. (It’s times like these I wish we had access to a well-stocked school library!)

There are two rooms

In the long post (with the long title) Why Resources in the Minority Language Are So Vital to Bilingual Success (With 6 Real-Life Examples From My Own Family), I stress the direct connection between the amount of minority language resources in the home and the child’s progress in that language. Although it oversimplifies the issue to say that families with the most resources will experience the most progress, I think there’s some truth in this generalization. After all, the more resources you have, and the more suitable those resources are, the more likely, and often, they will prompt times of exposure and engagement in the minority language. And, in the end, the child’s level of language ability will basically be in proportion to the quantity (and quality) of this exposure and engagement.

Think of it this way: There are two rooms, side by side. The first room is completely empty, barren of books and other resources. The second room is flooded with suitable resources, an inviting wonderland of minority language materials.

Which room would more likely appeal to your child? (At least after the novelty of making noisy echoes in the first room wears off!)

Which room would be more likely to encourage exposure and engagement—and thus progress—in the minority language?

Closer to the second

Now I know this is a whimsical example, and none of us live in homes that match either room—we’re more in the middle somewhere. But my point is, as far as possible, you want to create a home that’s closer to the second room, not the first. And you achieve this by recognizing the overarching importance of having abundant resources to continually stir the interest and interaction of parent and child, and by committing yourself to actively and perpetually pursuing new resources.

In my work with parents, what I see is this: When they make resources a higher priority, and put more investment of energy and funds into obtaining them (especially books), these fresh resources invariably generate fresh excitement in both parent and child, and produce a very positive uptick in exposure, engagement, and progress. Another side benefit—as I suggest in This Might Be the Very Best Thing About Raising Bilingual Kids (And It’s Probably Not What You Expect)—is the increase in quality interaction that parent and child enjoy together.

Finally, you see, resources in your target language (again, especially books!) are the wood needed to fuel a fire. Give the flame less wood and you’ll get a smaller fire; give it more wood and you’ll get a bigger fire. Thus, hand in hand with efforts to create meaningful interaction with the child, the minority language parent must also faithfully take on the never-ending task of seeking out suitable resources, too, so that the fire of language development will burn as brightly as possible throughout the years of childhood.

For more on the importance of resources, see…

How Many Books Do You Have In Your Home?

There Are More Resources in Your Minority Language Than You Think

[stextbox id=”comments”]How about you? What new book or other resource will you order today?[/stextbox]