Dear Diary: I Bet It Would Be Cool to Be Bilingual! 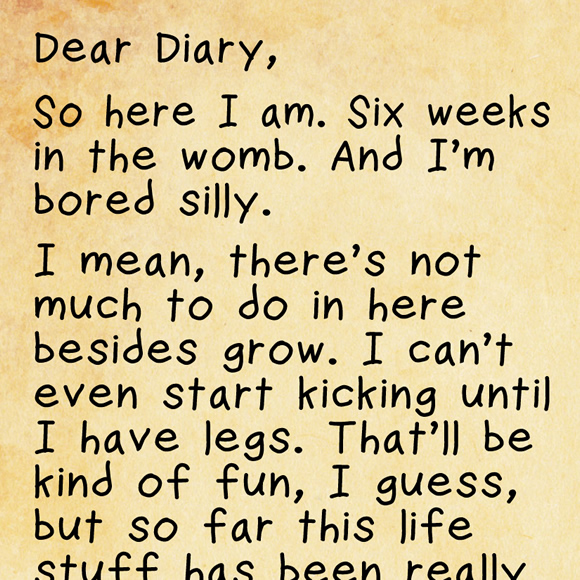 So here I am. Six weeks in the womb. And I’m bored silly.

I mean, there’s not much to do in here besides grow. I can’t even start kicking until I have legs. That’ll be kind of fun, I guess, but so far this life stuff has been really dull. No TV, no video games, no nothing.

So I’m starting this diary.

To be honest, I’m not really sure how I even got here. I mean, I get the birds and the bees and everything, but what I don’t understand is how one moment I was nowhere and now suddenly I’m somewhere.

Anyway, here I am, on this tiny planet in a vast universe, and I want to make the most of it! After all, if you stop and think about it, I won’t really have so much time to spend here, maybe 80 years or so if all goes well. That’s barely a hiccup compared to the almost 14 billion years that the universe has been around!

So I’m eager to get started out there, but apparently babies are first held in solitary confinement like this, even though we haven’t done anything bad yet. It hardly seems fair, but I’m hoping I’ll get a little time off for good behavior.

I suppose there’s another way to look at the situation, though. One little lifetime might not seem so long, but it’s also true that the things I do in it could, in a way, stretch for longer than those 80 years. Not 14 billion years, no, but maybe a few generations at least. Like, what if I have children of my own someday? And my children then have children, too? (It’s kind of funny to think about having grandchildren when I was just conceived myself!)

And what if, say, with my parents’ help, I’m able to learn two languages as I’m growing up? And then I help hand down those languages to my own kids one day, and they do the same for their kids? Do you see where I’m going with this? I mean, there are lots of things that can stretch farther than our own lifetime, but language is a big one. Language is something that can change a person’s lifetime in so many deep and meaningful ways.

As I said, I don’t have legs yet, but it seems to me this is like handing off a baton in a relay race. A runner can only run so far before they have to hand it off to the next runner, who then carries it for a short distance to the runner after that.

My parents have the baton now, but they’ll soon start handing it off to me. And finally, when I have a firm grip on it, I’ll carry it on into the world myself. I can then hand it off to my kids (if I have kids; I might just have a turtle) or others out there who want to run with it, too.

So, you see, maybe I’m still only six weeks old, but these weeks will eventually stretch into generations. And though I can’t really know what’s going to happen in my lifetime (and I don’t even want to, since I think a life of surprises will be far more fun), I do know that someday, somehow, I’ll have something meaningful to hand off to others. It might be language ability—I bet it would be cool to be bilingual, or even a polyglot! But it might be many other things as well.

And when my own legs finally tire, and it’s time for me to return to that mysterious place I came from, then the relay can continue without me, as long as it lasts.

But, for the moment, I still have a long way to go in this world.

I just need those legs to starting kicking…and running.

VIDEO: Your Child Wants to Be Bilingual

“I Can’t Do This Alone”: Remarkable Message from a Bilingual Toddler