Guest Post: Creating a Little Bilingual Family—If Not Precisely By the Book

ADAM’S NOTE: One essential lesson for parents to learn early on—or potentially face growing frustrations on their bilingual journey—is the need to add greater realism to the initial idealism we feel going into this experience. Idealism continues to play a vital role in motivating our efforts, but relaxing into a more realistic and flexible mindset, while remaining persistent and playful, day by day, enables us to pursue a path that is both more enjoyable and more effective. In this insightful guest post, Jordana Timerman brings this point to colorful life by sharing the candid story of her first two years as a parent on a bilingual quest. Thank you, Jordana, for conveying an important message that I’m sure will be encouraging for others to hear. 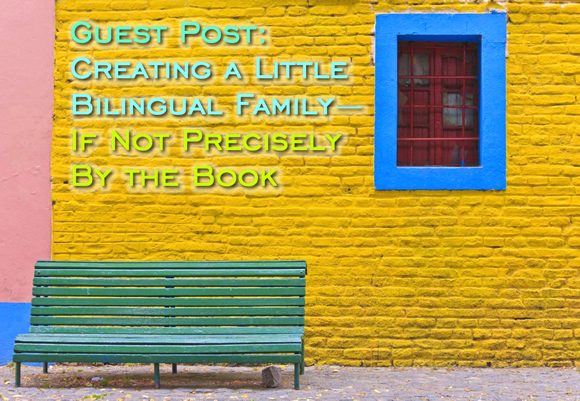 Jordana Timerman is a freelance journalist in Buenos Aires, where she grew up speaking English and Spanish. She is the mother of a two-year-old who is being spoken to in English (minority language) and Spanish (majority language) in a disconcertingly disorganized fashion. 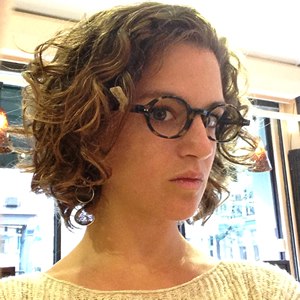 I try hard not to cringe when well-meaning friends and family speak to my daughter in broken English. According to the “rules” of bilingualism, they should be speaking in Spanish, their native language and the majority language in Argentina where we live. But I’ve found that when people hear me speak to my two-year-old in my native English they automatically trend towards using it themselves with her.

The curious result is my Argentine-born daughter is being treated like a foreigner in her own country. I don’t want to be the language police—I want people to have easy relationships with my child. But as they speak to her, all I can think about are admonishments to parents of bilingual children not to mix languages.

Before my daughter was born, my partner and I casually agreed that I’d speak English to our children, thus sharing my native language and arming them for an anglo-dominated world. Like pretty much everything else pre-parents blissfully envision, the post-partum result was a lot more complicated.

Language strategies, such as “one-parent-one-language” or “minority language at home,” all sound perfectly rational in theory. But somehow the realities we confronted didn’t fit into the patterns those strategies outlined so neatly.

I found myself uncertain over how to handle the interactions that remain unscripted in these approaches: How should I speak to my child in front of playground friends who don’t speak English? (Really awkward mix for now.) How to navigate daily interactions with babysitters who don’t understand what I’m saying to my daughter? (I sometimes wind up dubbing my own speech—I say it once in English and then repeat in Spanish for the caretakers’ benefit. It’s awful.) Was it alright to keep speaking in Spanish to my partner as we had always done? (It’s very uncomfortable to switch languages once you’re used to using one with somebody, so yes, we stick to Spanish.) A lot of the time I feel like an actor in a bad pantomime.

I was wading through texts emphasizing the necessity of purity and language separation, and starting to feel more like a language teacher than a mother. My partner, who has never been overly deterred by theory, was more decisive. He simply decided to speak only English, though a native speaker he is not. His infectious eagerness allowed me to overcome my discomfort, and normalized the use of English at home. He truly grasped the greater importance of simply plunging into bilingualism, no matter how absurd seeming the process. So we wound up in a somewhat unorthodox “minority language at home” system—despite my concerns of raising a gibberish-speaking child, not yet completely assuaged, to be honest.

But when I noticed other people—all Spanish speakers—were also speaking English to her, it started to feel like too much. Her grandparents, our friends, the odd waiter or passerby…

Our conversations were spurring people to intersperse English nouns and verbs into their Spanish phrases towards our daughter, and to subject everybody to strange grammatical constructions. No matter how often we clarified that she understood both equally, people would hear us speaking in English and slip into a broken version themselves. (Who knew so many people here spoke at least rudimentary English?)

It’s hard not to sound snooty when you ask people to refrain from their well-meaning attempts to communicate with a kid that really does respond better in English. What do you say: “Oh no, we want her to learn proper English.” Or “Well, thanks so much for your effort, but this is really a family thing.” You get the picture.

The worst part is, we started to wonder if she was getting enough exposure to the majority language. A rough preschool start this year has made me more sensitive about who speaks what. My partner has switched to his native language, which might help pull others in that direction. And I have pointed out the importance of family and friends in strengthening her Spanish—making them stakeholders in her acquisition of Spanish words for colors and numbers. I try to gently remind people who are lapsing too often. After all, our aim was never to pretend she’s growing up in an English village—she lives in Buenos Aires along with the rest of us and we want her to communicate here too.

You do the best you can

While I personally avoid even code-switching when I speak with my daughter, the reality of parenthood has pushed me to relax with language approaches. (And pretty much everything I’ve ever held dear, from personal hygiene to mental coherence.) I may come to regret it, but you do the best you can. Hopefully, her school and other places where people do not use English will eventually keep her mixing in check. I’m also starting to realize—thanks in part to Bilingual Monkeys—that we’ll need to recalibrate many times, and come up with strategies according to different moments in our daughter’s life.

Two years in, I listen as my partner reads Harold and the Purple Crayon in his heavily accented English, and pauses to joke in Spanish that our daughter needs to vary the nighttime reading selection. I’ve relaxed about our slips in language orthodoxy. And when we converse between the three of us, we can draw on our linguistic gymnastics training from infancy boot camp. At some point along the way it somehow stopped feeling strange when I say something in English and my partner responds in Spanish. I hope that we’ll succeed in maintaining our languages separate enough to make sense to our daughter. But I’m also relieved that we created a little bilingual family. And if it’s not precisely by the book, well, nothing else in parenting is either.

How about you? What are your thoughts after reading Jordana’s story?

PrevPreviousRecommended Resources: Great Books and Blogs for Nurturing a Child’s Multicultural Spirit
NextVIDEO: Your Child Wants to Be BilingualNext