Could a Handful of Dice Get Your Bilingual Kids Speaking More (And Improve Their Math Skills, Too)? 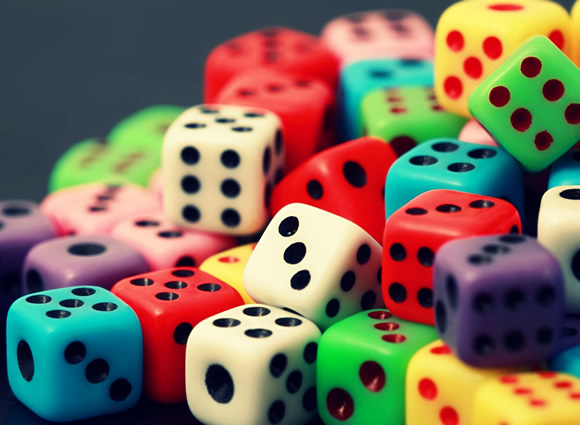 One of the helpful things about being a longtime teacher of children is that I’ve amassed a lot of games and other playful items over the years. (To tell the truth, I probably became a teacher just so I could continue collecting toys as an adult!)

Among them is a little plastic bag that contains 18 dice in various colors. I know I bought some of these dice at a cheap variety store in town, but I have no idea where all the others came from. (Have they been mating?)

Anyway, last week I grabbed this bag from the shelf—to distract my kids from murdering each other after their nightly bath—but I seem to have discovered some fun and useful games for encouraging use of the minority language—any language—with a handful of dice. (And strengthening math skills, too.)

In fact, my kids have become so feverish about rolling these dice every night before bed that I’m beginning to worry about a gambling addiction.

Of course, I can’t guarantee that a handful of dice will hook your children, too—this will largely depend on their age (from roughly 5 to 12 is best, I suspect) and their personality. But I think it’s safe to say that the act of rolling dice holds a powerful appeal—for any age, really, including adults—and this special magic may attract your kids, too.

If it does, and playing with dice becomes something they’re eager to do, then try turning this to your advantage to encourage use of the minority language from reluctant children: if they want to play with dice, they have to use the target language with you.

I realize that the success of this rule will depend on your particular circumstances, but since dice games are largely limited to numbers—they don’t require a whole lot of fluency—perhaps this will help make the challenge more achievable, even if your kids normally hesitate to use their “weaker” minority language.

Basically, the more dice you have, the more games you can play. And since dice are cheap, I recommend having at least several for each child. (One of the biggest thrills for my kids—and I’ll describe the game below—is rolling all 18 dice at once and watching them clatter to the hardwood floor. All those dice barely fit into their little hands!)

Here, then, are some games you can play with your dice. I’m sure you and your kids will come up with other ideas, too. (And if you do, please describe them for us in a comment below!)

Highest Total
Each player rolls one or more dice and the winner has the highest total. Turns can be taken, or if you have enough dice, players can have their own and the rolling can be done at the same time—which is faster and more exciting.

Lowest Total
Each player rolls one or more dice and the winner has the lowest total. Again, turns can be taken, or the players can roll simultaneously with their own dice.

First to the Total
Players have their own dice (at least two), and must be the first to roll the agreed total: seven, ten, etc. This total must be the exact sum of the player’s roll.

First to the Target
Players have their own dice (one or more), and must be the first to roll the agreed target: a six, or two sixes, etc. For more difficult targets, like three sixes, players need not get them all in one roll; after getting a six, they keep it and roll the remaining dice until they reach the target. Your kids will probably be eager to set these targets themselves, but if not, solicit their ideas.

Choose a Number
Players take turns rolling all the dice. Before a player rolls, he declares a target number, and he gets one point for every one of these numbers that appears in his roll. (Each player can choose the target number he likes, from one to six—it’s up to the individual player.) For example, if I choose “three” as my target number, and I roll four “threes,” I get four points. The player with the most points after one round (or the total of multiple rounds) is the winner.

P.S. For older children, Yahtzee is a classic dice game that I recommend highly. And since the focus is on numbers, it can be played in any language.

For other playful ways to nurture language ability, head right to this page of links…

[stextbox id=”comments”]How about you? If you tried these dice games, how did it go? Did you discover any new variations?[/stextbox]