Chameleon Reader: The One Product I Wish I Could Gift to Every Parent and Teacher of Bilingual or Multilingual Children 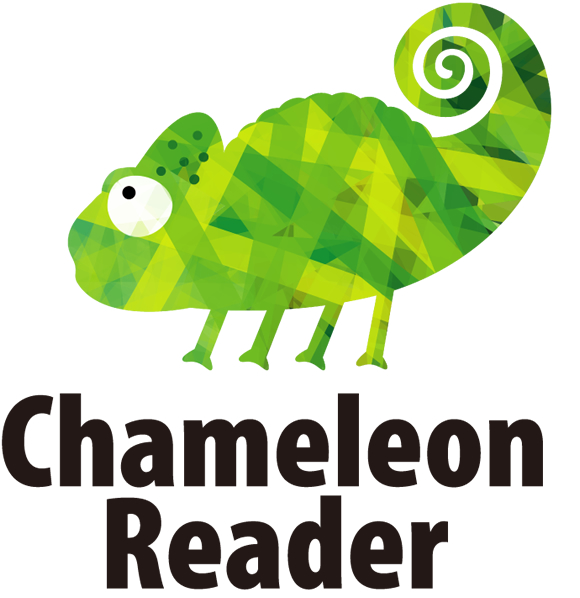 If only Chameleon Reader had been around when I was teaching bilingual kids, and when my own kids were small! It would have been such a fun and effective way to nurture their ability in our minority language!

Full disclosure: Over the past eight years, since I began this blog, I’ve regularly gotten requests to review books and products and services with some connection to raising bilingual kids. And in many cases, I’ve received free “review copies” of these things, which is also true of Chameleon Reader. However, I only blog about resources that I can genuinely recommend and Chameleon Reader is honestly the single most useful and flexible product I’ve ever seen for supporting parents and teachers in their efforts to nurture language development in children. (And I have no financial stake in saying so.)

At the same time, I do have a couple of minor quibbles with the version of the product that I tried out at home—and I’ll mention these, too—but the fact remains that Chameleon Reader is such an incredibly clever and helpful device that such quibbles do nothing to detract from my full (even overflowing) enthusiasm for it.

So what is Chameleon Reader? Actually, it’s a little hard to explain because it can be used in so many ways, and even beyond its suggested uses, parents and teachers can no doubt dream up their own creative ideas, too.

In other words, the potential of this device is endless, really, but let me start by sharing its primary and most powerful function. 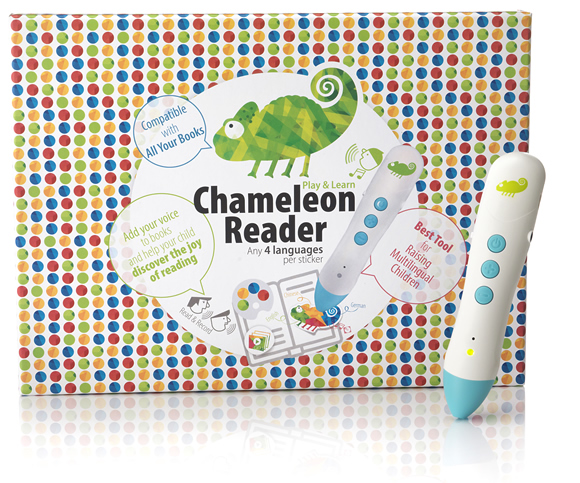 Look over at your big bookcase of picture books (I hope you have one!) and now imagine the instant ability to easily turn every one of those books into an audio book—in your voice or other voices—for children to listen to anytime.

And what’s more, you could, if you like, even turn each book into an audio book that will tell the story not just in one language, but in two or three or even four different languages, any of which can be chosen by the child.

Oh, but you’re only working with one or two languages? Then how about adding four different readings of your one target language to the book—maybe readings by you, grandma, grandpa, and a favorite aunt, which the child can choose from, again and again? Or perhaps two readings in one language and two readings in another language?

Are you beginning to grasp the extraordinary possibilities for your home or classroom, to promote language and literacy development, by wielding a remarkable “magic wand” like this and turning regular old picture books into multilingual and/or multi-voice audio books?

But how? How is such a thing possible?

While the concept is fairly simple, and not hard to put into practice (I turned a book into a bilingual audio book that can tell the story in either English or Japanese in less than 10 minutes), describing how it works is actually kind of difficult. So it’s better if I share a Chameleon Reader video which shows this “magic wand” in action.

Isn’t that fantastic? The device was originally designed by a therapist in Taiwan, for children with special needs, then was developed further and rebranded, for bilingual and multilingual children, by an entrepreneur in the Netherlands who’s the mother of a multilingual child herself.

Now if that’s all Chameleon Reader could do, I would still be delighted with it, but in fact, there are many more possibilities beyond this primary function. Even when you’re on the go, and don’t have the books with you, you can create a playlist of your audio books so your child can listen to them anywhere. It’s also possible to make another playlist of music choices, whether songs that you sing yourself (or with your child) or songs from any mp3 files that are uploaded to the device. Again, let me offer a video to show how this works.

The basic mechanism for adding audio to books can be used, as well, to add audio to pretty much anything where you can place a sticker and tap the reading pen. This page at the Chameleon Reader website offers a variety of ideas like…

*supporting activities with children who have special needs

And as I mentioned, you can also get very creative (even crazy) with the potential of this device! For instance, I turned our bearded dragon into a bilingual lizard by putting a couple of stickers on her head! When I tapped one, she enthusiastically told me, “I love crickets!” And when I tapped the other one, she declared the same fondness for crickets in Japanese! (Maybe I should now dub my device “Bearded Dragon Reader”!) 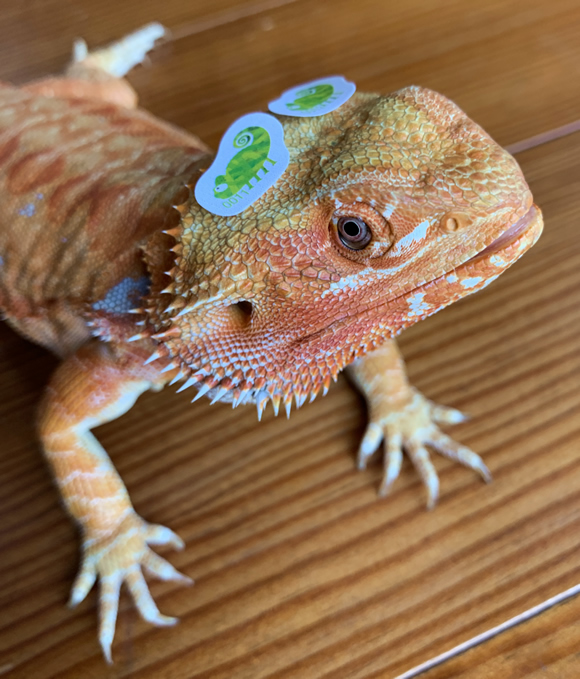 Along the same lines, you could create talking toys or even playfully turn your child into a more active speaker of the target language by placing a sticker or two on her cheek or shirt with some embedded words, phrases, or sentences.

The marvelous possibilities are limited only by your imagination!

Okay, so here are my minor quibbles, things that I’m sure will continue to be considered as the product matures. But they take away nothing from the wonderful functions and features of the product itself, which is utterly brilliant in its design and execution.

1. While the Chameleon Reader Starter Set comes with a user manual (in four languages: English, Chinese, French, and German), I found the manual somewhat hard to follow. The main issue, I think (apart from my own admitted shortcomings at following user manuals!), is that the product itself is rather difficult to easily explain because, although it’s not a complicated concept, it’s an unfamiliar concept, with a variety of uses, and it’s much easier to show how it works than to tell how it works. So I don’t fault the user manual, really—because I think it’s about as helpful as it could be—but I also feel that the videos of the product are more helpful for quickly grasping how to use it. So I strongly suggest watching the growing number of product videos offered at the Chameleon Reader YouTube channel. 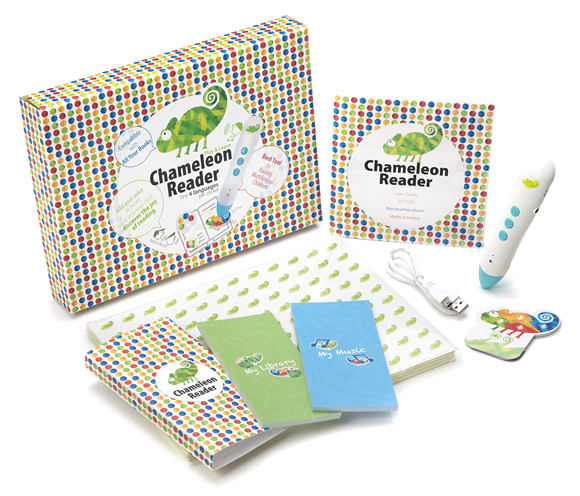 2. Although the Chameleon Reader pen seems pretty sturdy, it’s made of plastic and there’s naturally the risk of damage if it’s dropped onto a hard surface. I understand that adding a long strap to the design could be a safety hazard if looped around a child’s neck, but perhaps a shorter strap could go comfortably around the user’s wrist to help prevent accidental drops. 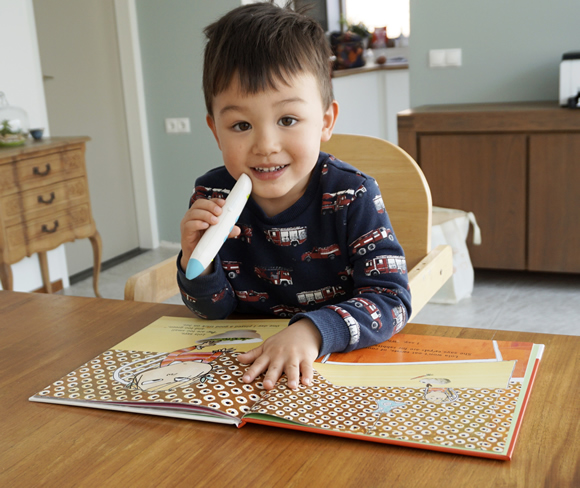 Chameleon Reader is a tremendously fun and useful product and I can’t recommend it highly enough for homes and schools. In fact, if I were Santa Claus, this is what you’d all get for Christmas this year! Not only is its main purpose incredibly powerful—giving parents and teachers the ability to “magically” turn any book into an audio book, and in any language or languages—it can also be used in an array of engaging and effective ways beyond that. While I wish I had had this device a decade ago—it would have been such a valuable asset in my work with younger bilingual kids, including my own—I still plan to explore how it could be used in captivating ways to benefit older children as well.

And bearded dragons, too.

How about you? How could a device like this be helpful for your bilingual or multilingual aim?

PrevPreviousNew Children’s Book About Being Multilingual, in Multiple Languages (with a Book Giveaway!)
NextUse Coloring Books to Promote Language Exposure for Your Bilingual KidsNext