“Bilingual Lives” is a series of profiles of interesting people who are leading bilingual (or multilingual) lives, both personally and professionally. This series was inspired by the memory of my mother, who began a bilingual life that she later regretted not being able to sustain into her adult years. If you would like your life and work to be featured in this series, please contact me. 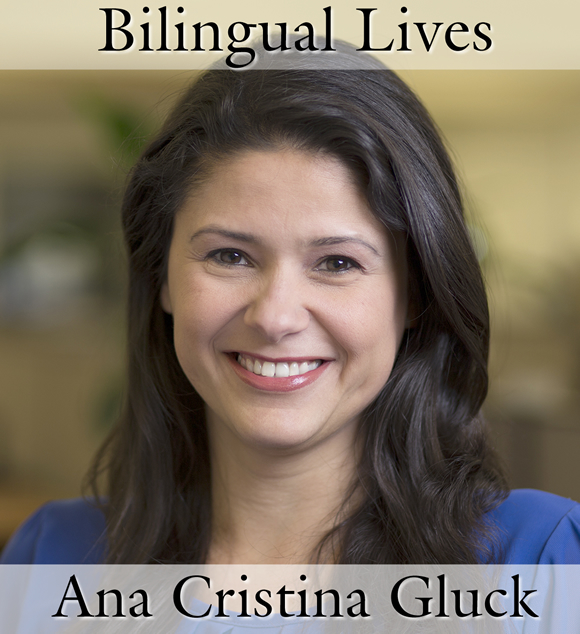 Have you ever thought about writing a children’s book?

I think this idea has crossed the minds of many people, particularly parents who read a lot of picture books to their own kids.

And some of these parents, of course, are seeking to raise bilingual children and so the book they imagine writing would be in their mother tongue, to help their kids—and other kids in the world—learn that language and appreciate that culture.

Well, one parent who has fulfilled that wish is Ana Cristina Gluck, a mother of two who is originally from Brazil and now lives in the United States. Ana Cristina, who has a background in graphic design and marketing, wrote the children’s book Minha Familia, in Portuguese, and this book has gone on to earn dozens of five-star reviews at Amazon from grateful parents.

In fact, that book is only one part of Ana Cristina’s larger success because she has created her own publishing company, ABC Multicultural, that produces a variety of children’s books in multiple languages. To date, ABC Multicultural has published 14 titles in languages that include Portuguese, English—and coming soon—German, Italian, French, and Spanish. (And if you enter the giveaway below, you’ll have the chance to win any 3 books of your choice!)

Recently, I spoke to Ana Cristina via Skype about her experience as a writer and publisher, then followed up by email to pursue the interview below. Indie publishing is certainly a challenge (as I know personally!), but Ana Cristina’s proactive spirit is enabling ABC Multicultural to produce high-quality books on a regular basis and positively impact the lives of families all over the world.

Could you please tell us about yourself? In what ways has your life been touched by bilingualism?

I’m a Brazilian mom, art director, author, and founder of ABC Multicultural, an American publisher of children’s books in many languages, including Portuguese and English. I moved to the U.S. in 1999, went to college in Long Island, New York, and got married to a monolingual American man. I have a degree in Commercial Arts & Digital Technology and professional experience in graphic design and marketing. I live in New Jersey with my husband and two bilingual daughters. I started ABC Multicultural in 2013, a few years after my first daughter was born. Since then, my mission with my publishing company has been to promote bilingualism by encouraging parents living abroad to teach their native languages to their children. 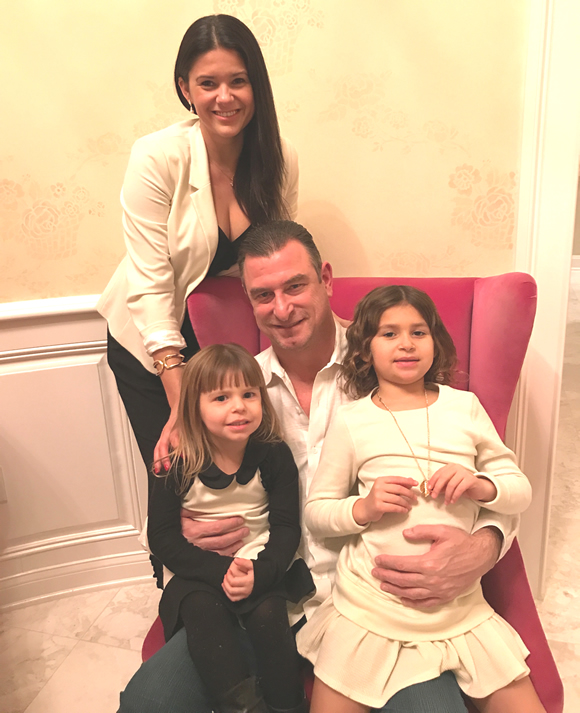 What led you to become a writer and publisher of children’s books?

I’ve spoken to both of my daughters in Portuguese since they were born. When my first daughter was two years old, I became very concerned about having her learn Portuguese, my mother tongue. I started searching for books in Portuguese to help me teach her the language but I couldn’t find any in the U.S. That’s when I came up with the idea of starting a publishing company to publish children’s books in Portuguese, English, and other languages to help other parents raising bilingual children like me. With that idea in mind, ABC Multicultural began with a collection of four board books for babies and toddlers learning Portuguese. Since then I’ve published four other books of my own and more from other authors. The books are sold on Amazon in print and e-book formats. I’m now continuing to expand our line of books with additional titles and additional languages. 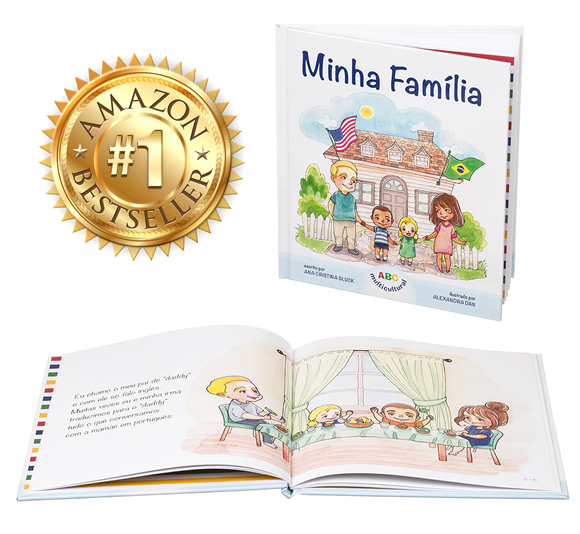 Could you tell us more about ABC Multicultural?

ABC Multicultural is a startup publishing company focused on creating multilingual children’s literature. We can publish children’s books in any language and sell them through Amazon. We publish hardcover books, paperbacks, board books, and e-books. At ABC Multicultural we offer a Publishing Partnership where both publisher and author equally invest in the production and publication of the book and we equally share the royalties that the book earns.

We work with a purpose: to motivate parents who are living outside their home country to pass on their native language to their children. As a result, these children will have the opportunity to grow up bilingual. We believe that language is the most important piece of culture a person can learn and teach. Language has the power to create relationships and to bring people closer together. The world is a better place when understood in more than one language.

So your goal is to publish books in a variety of languages?

So far, most of the books that we’ve published are in Portuguese, because I’m Brazilian, but my idea is to keep expanding the languages and the publications. 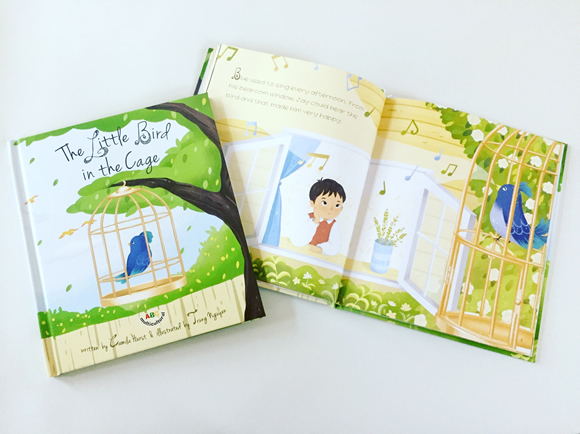 What’s it like being an indie publisher in this field?

It’s tough! We need to change as the market changes and always stay up to date with the many forms of marketing, including social media. You have to love what you do to keep going and not give up. Luckily, I do love what I do!

What does the future hold for you and your work?

Many more books written by me and other authors published by ABC Multicultural in many different languages.

What would be your best advice for parents seeking to raise bilingual children?

See other posts in the “Bilingual Lives” series…

Book Giveaway! (Win any 3 books of your choice!) 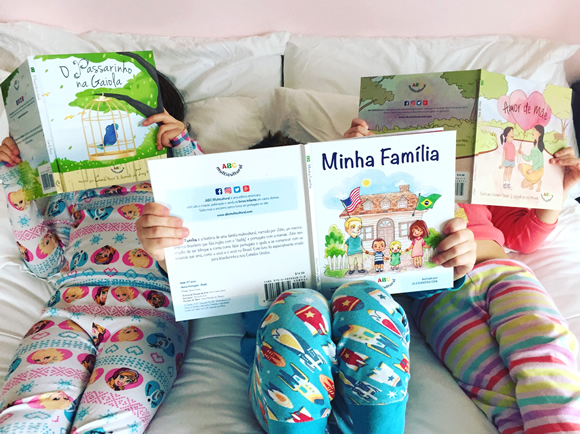 Ana Cristina has kindly offered to send three books to one lucky winner of this giveaway. The winner can choose from among any of the current titles offered by ABC Multicultural.

The winner was picked randomly by Lulu, who chose…

Amy in France
(Check out Amy’s lively blog about her trilingual family!)

Congratulations, Amy! And many thanks to everyone who entered the giveaway!

To enter the giveaway, just follow these three simple steps…

1. Share this post with others via social media. Help spread the word on Ana Cristina’s good work for bilingual and multilingual families. Use the sharing buttons on this page or simply copy and paste this link. (On Twitter, please add @ABCmulticultura to your tweet so Ana Cristina will see it!)

2. Leave a comment below with the following information. (And please proofread your comment, before submission, to check that the information is complete.)

1. Your first name and where you live (Example: Adam in Japan)

3. Your two (or more) languages (Example: Japanese, English, and Spanish)

4. If you wrote a book for children, what would it be like? Share whatever ideas you have! (Example: I’d like to write a series of chapter books about bilingual twins and how their “language powers” enable them to overcome the difficulties of dangerous adventures.)

3. All entries must be submitted by the morning of Saturday, July 21 (Japan time). On that day, the comments will be printed out and cut apart to serve as entry slips for the drawing. The slips will be placed in an empty tub of Lego and I’ll have my kids arm wrestle to see who gets to randomly select the winner. I’ll then contact the lucky winner by email and update this post with the results.

I won’t respond to your comments here, but Ana Cristina and I look forward to seeing them. Thank you for entering the giveaway, and for sharing this information about Ana Cristina’s work with others.

PrevPreviousAnnouncement: It’s Been a Tough Year, and It’s Time For a Break
NextMake the Most of Your Precious Time with Grandparents, Whether Near or FarNext