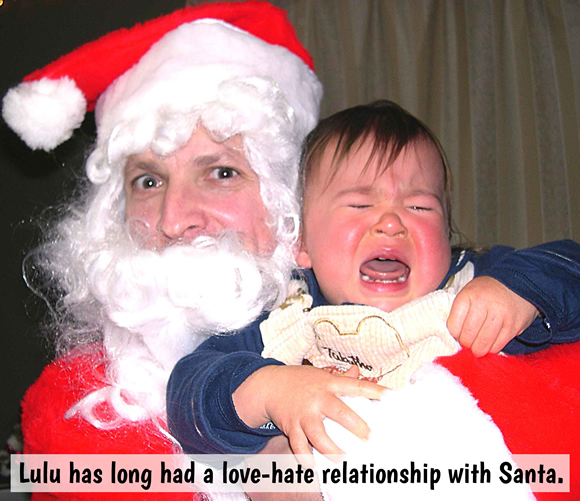 When my darling daughter was 7, she wrote a letter to Santa Claus just days before Christmas, asking him for a Wii video game console. This put me in a delicate position because Santa (me) hadn’t planned on getting her a Wii and I was afraid—because Lulu’s emotions were quite explosive when she was younger—that our living room would be the scene of a wailing, flailing tantrum if she didn’t find a Wii under the tree on Christmas morning.

Which wouldn’t exactly make this a day of peace and joy.

So, to avoid a meltdown on Christmas morning, old Santa wrote her back and the letter found its way into our mailbox on the afternoon of Christmas Eve. Lulu tore open the envelope eagerly, but her face quickly fell as she read Santa’s apology about being unable to deliver the Wii she wanted. (“I’m afraid your letter arrived at the North Pole too late,” Santa explained. “A toy like this takes a while to make and the elves just didn’t have enough time.”)

Anticipating her disappointment, Santa stressed that he had prepared other gifts for her, gifts he was sure she would like…but Lulu promptly burst into tears and flung herself onto the couch, where she writhed and ranted.

The curious thing about these temper tantrums was the fact that she would freely code-switch as she shrieked, using both English and Japanese to loudly voice her displeasure. And when she erupted in this way, there wasn’t much Keiko or I could do to calm her: the storm of frustration simply had to pass.

Keiko, though, was always better about letting Lulu be during these times; for me, it was hard not to intervene and try to soothe her sobbing. But the sorry truth is, my attempts at reason often riled her up even more. And on this occasion, when I sought to assure her that we could probably get a Wii in the future, when she and her little brother were older, she just wailed at me:

“But in the future you’ll be dead and then I’ll never be able to get one!”

I had to laugh, but at least I had enough sense to hold it in until I left the room. Then I opened my journal to capture this whole incident—and that memorable punchline—for posterity. And all the while I was typing, I could hear little Lulu’s continuous cry: “Santa, I want a Wii game! I want a Wii game!”

Fifteen minutes later, her tears now spent, all was right with the world again.

And it was a happy Christmas morning, after all. 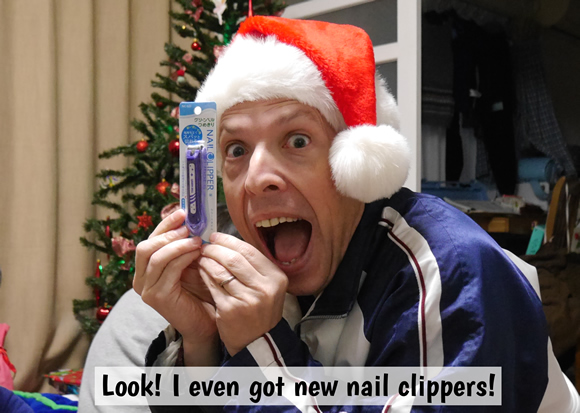 May you have a peaceful, joyful Christmas, too—even if you don’t get a Wii (or nail clippers)!

More posts to put you in the Christmas spirit…

The 12 Days of Christmas for Raising Bilingual Kids
Hear my kids sing our original Christmas carol!

A Bilingual Child’s Christmas List
What wonderful things did my son want for Christmas when he was 6?

This Wish to Believe in Santa Claus
Another funny Christmas story—with a photo of me from long ago!

[stextbox id=”comments”]How about you? Any Christmas tales to tell from your own family?[/stextbox]

PrevPreviousBigger and Better Than Ever: My Best Tips for Raising Bilingual Kids
NextBILINGUAL Contest: Win a Tasty Treat from Japan! (Up to 5 winners!)Next