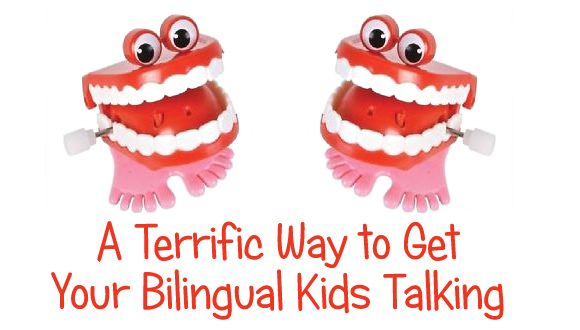 Okay, so I’m sitting at dinner, across from my nine-year-old daughter. It’s just me and her because my wife and my son have already eaten. On Mondays, Lulu has a dance class after school, and because I’m the designated driver, we always get home well after 7 p.m.

Too often, I’m afraid, I don’t take full advantage of these opportunities to talk to her, just the two of us having dinner together. The truth is, by the time we get home, I’m just too tired to create much conversation. I’m a morning person, by nature, and because my brain shuts down at sunset, I generally turn into a slow-chewing zombie at the dinner table.

But this day is different. Painfully aware of the wasteful silence hanging in the air, I spontaneously launch into a little speaking game that not only successfully generates a lot of fun discussion, it brings us closer together, too.

Sometimes, as you would expect, the ideas that I pursue with my kids and my students are the result of deliberate thought: I have a certain challenge and I consciously craft an effective way to address it.

At other times, an idea simply flashes in the moment, and I immediately begin to improvise, carried along by that initial burst of inspiration. After many years as a teacher, I trust that these moments, though they may fail at times, more often than not produce some of my most successful solutions. And, in fact, because these ideas come as a surprise to me, too, I feel a fresh energy that isn’t experienced to the same degree with ideas that have been conceived beforehand. This sort of excitement charges the moment and fuels my interaction with the children present. As a parent and teacher, these are the moments—these lively, living moments—that I relish most of all and that kids often respond to best.

So I’m sitting there with Lulu and I abruptly point at her and say: “Dogs.”

For a second she stops chewing and stares at me blankly.

“What would you do with your little fluffy dog?”

And she proceeds to tell me how she would cuddle it, and play with it, and take it for walks.

I remind her that she’d have to help clean up its poop, too.

Then suddenly I recall an incident from my own childhood, when I was leaping over the newspaper where our little black dog did its business. The light was dim and I didn’t see a stray poop that had missed the newspaper. When I landed on the other side—SQUISH!—I hit that poop barefoot.

Lulu laughs at that story.

Lulu glances about the kitchen, her eye falling on a box of cereal.

First, I complain about the poor selection of cereals in Japan. Then, again, I’m brought right back to my own childhood and I share glowing memories of my favorite cereals when I was a boy, raised in the United States, the superpower of sugary breakfast foods.

Lulu follows by describing her amazement when we visited America last summer and saw a whole wall of cereal boxes—dozens and dozens of different kinds—at the supermarket.

“Okay,” I say, chopsticking another bite of fish, tonight’s main course, into my mouth. “Fish. Go.”

“Fish is hard to eat,” I add. “When I was growing up, we didn’t eat much fish. And I’m not good at getting the meat from these bones. Worms would be easier to eat, don’t you think?”

This little game—let’s call it “Topic Talk”—is played just as I’ve described: you simply take turns tossing out topics and talking about them.

The important thing is speed and spontaneity: just choose whatever topics spring to mind and speak freely about these subjects without stopping to think. If you do, I bet you’ll be surprised at how rich your conversations can become, and how, like me, you’ll probably flash on childhood memories, too, which your children will love to hear you recount. (See Strange-But-True Tales: Baby Chicks in the Bathtub for more on the important act of sharing stories from your childhood with your kids.)

After this talk-filled dinner with Lulu, I had a sort of revelation: there’s always something to talk about. Conversation about daily events tends to dry up pretty quickly, but by making use of a tactic like “Topic Talk,” you have available to you, at any time you like, a practically infinite number of things to discuss—and thereby engage your children in active use of the minority language.

Remember, the more you can engage your children in using the target language, the more their language ability will grow, and “Topic Talk” can be a fun and useful tool for accomplishing this essential aim.

P.S. For another fun tactic that can produce a tidal wave of lively, spontaneous speech, see How I Get My Bilingual Son to Talk His Head Off in the Minority Language.

PrevPrevious22 Fun Photos from Our Adventures in Hagi, Japan
NextYes, That’s Me Modeling a Toddler’s T-shirtNext