In Getting a Bilingual Child to Feel the Value of the Minority Language, I talk about the importance of promoting a positive attitude toward the target language—in our case, English. After all, if the child doesn’t hold positive feelings toward the minority language, it will be much, much harder to make the sort of strong, steady progress necessary to match the relentless development of the majority language.

A positive attitude toward the minority language—a heartfelt grasp of its value—is what ultimately will power the child toward the highest levels of bilingual ability.

In the article above, I made two suggestions to help instill in a child the sense that the minority language is useful to her life. (Apart from parents regularly talking up the value of being bilingual to her future.)

With my own kids, these have both been powerful ways of promoting the value—the usefulness—of their minority language.

Just yesterday, though, I discovered another way to deepen that feeling of value—and its impact may even be stronger than these other ideas.

Eager to use her English

Yesterday a large international event was held in Hiroshima. It’s an annual event called the “Day of International Exchange and Cooperation,” and it brings together a variety of international groups and activities at the conference center in Hiroshima Peace Memorial Park.

For the second time, Lulu and I took part in a workshop by the Hiroshima Interpreters for Peace, a group whose members serve as volunteer guides for international visitors to the city.

Like last year, we helped with the workshop by participating in role plays involving “guides” and “visitors,” pretending to interact at various sites of interest in Hiroshima (like Peace Memorial Museum). These role plays were scripted, in English, and the participants stood in front of an audience of about 80 people.

Last time, when Lulu was 7, she enjoyed the experience, but was reluctant to stand in front of the audience by herself; she would only take part while standing by my side.

Over the course of this year’s workshop, however, she grew eager to read the role plays by herself and did a really fine job. 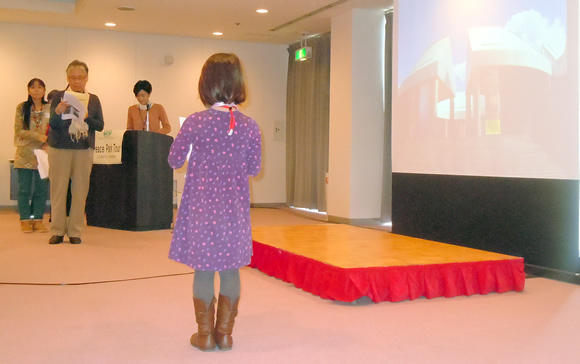 One reason, perhaps, is that she follows in my footsteps: we’re both a bit shy naturally, but turn on the spotlight, and we become little hams. (I have a long background in theater.)

Being helpful to others

The other reason, though—and here’s my point today—I think Lulu felt inspired by the opportunity to be helpful with her English ability.

Consider this: Don’t we all get a good feeling when we’re being helpful to others in some way? It’s only natural, isn’t it? And doesn’t that good feeling stir further motivation? (Example: I’m thrilled every time I get a message from someone telling me this blog is helpful to them! And these comments definitely give my efforts a boost!

Well, yesterday I think Lulu unconsciously grasped the value of her English ability in a way that goes even deeper than her experiences interacting with other English-speaking children or homestay guests. In those situations, English has been felt as useful to herself, but this time I believe Lulu felt something even stronger: English can be helpful to others.

And now I wonder: Could this be the most powerful way to promote the value of the minority language and inspire a positive attitude? By creating opportunities for the child to be genuinely helpful to others through the use of her minority language ability?

How about you? Have your children had an experience where the use of their ability in the minority language was helpful to others? Please share your story!

PrevPreviousWhat’s the Best Language Strategy for Raising Bilingual Children?
NextTurn Your Kids into Eager Readers with This Fun, Simple StrategyNext