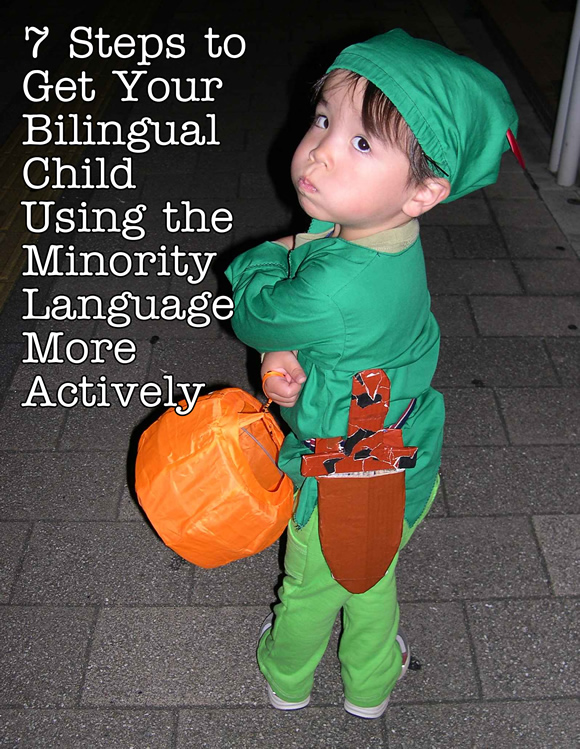 When it comes to raising bilingual children, the most common concern I hear—and this is a frustration felt by families in all parts of the world—involves strengthening the child’s ability in the minority language and getting the child to use that ability more actively.

One of the most-read articles at this blog discusses this difficulty at some length and offers a variety of suggestions for addressing it:

With this post, I hope to boil the problem down into 7 essential steps that will enable busy parents to conceptualize this issue clearly and take effective action in order to realize even greater success on their bilingual journey.

1. Recognize the Problem
When a child is reluctant to actively use the minority language—instead, relying mostly on the majority language to communicate—this can invariably be traced to shortcomings in the two “core conditions” of exposure and need: there must be an ample amount of exposure in the target language and an organic need to actually use it. Exposure and need lie at the heart of the whole challenge of fostering active bilingual ability, and if these two conditions are adequately addressed, then stronger progress can be made. (In fact, if there is adequate exposure and need from the very start of this journey, the problem of reluctance to using the minority language will hopefully be prevented before it even occurs.)

2. Commit to Addressing the Problem
When there are shortcomings in exposure and need, a stronger commitment is required for making mindful, proactive efforts on a daily basis. The bilingual aim—if it’s truly an important goal to you and your family—must be made a higher priority and placed more at the center of your lifestyle. Without this firm commitment to addressing the problem as persistently and resourcefully as you can, it will be hard to fortify the exposure and need that are necessary for promoting stronger language development and more active use. In fact, the majority language, as it continues its relentless progress, will likely grow even more dominant.

3. Reshape the Basic Conditions First
Whenever possible, first take a hard look at the basic conditions of your situation and start here by reshaping these conditions so they provide more solid support for your aim. These “larger actions”—like the language use within your family, the child’s schooling, the frequency of travel to a minority language destination, or even your own work schedule or place of residence—can have a stronger and broader impact on the child’s bilingualism. While “smaller tactics” are certainly useful, too—techniques or tricks that can help promote language development and use—these ideas are most effective when combined with “larger actions” that can fortify the underlying circumstances of your bilingual journey.

4. Strengthen Language Exposure
Be as proactive as possible about increasing the amount of exposure to the target language that the child is receiving on a daily basis. Playful, engaging exposure is the single most important factor in promoting stronger progress and active use. Along with establishing and sustaining effective habits and routines (talking a lot to the child, reading aloud each day, etc.), commit to enriching your home with a steady stream of suitable resources in the target language (books, especially, and if children’s books in your target language are hard to come by or don’t suit your kids, get a stack of colorful “wordless picture books” and simply tell them the stories in your own words). The more resources you have, the more you can potentially engage the child in meaningful interaction and provide a greater amount of productive language exposure. And as you seek to put more emphasis on the minority language, you will likely further your cause by mindfully making efforts to “de-emphasize” the majority language and restrain its dominating influence.

5. Strengthen Need for the Language
For minority language parents, the primary aim of the first few formative years is to “condition” the child to communicate in the minority language once he or she begins to speak. This is achieved by attending to the two “core conditions”: providing ample exposure to nurture language development, while cultivating the child’s need to use that language actively. This need, however, can be undermined in circumstances where the minority language parent also regularly uses the majority language with the child or in the child’s presence. While I encourage parents to minimize their use of the majority language to the extent possible—particularly during these early years—I recognize that, for many families, this can be quite challenging to carry out in practice. In order to strengthen the child’s need for the minority language, it may be necessary to seek out support beyond the immediate family to create “monolingual” experiences and input: extended family, other caregivers, schools and tutors, travel, etc.

6. Make Use of Daily Techniques
At the same time you pursue the “larger actions” mentioned above—and persevere in speaking the minority language to your children as consistently as you can—the use of “smaller tactics” for promoting its development and use are important, and have their place. In fact, proactive use of such strategies during the early years may even help mitigate the problem of passive language ability later on. These four techniques (with a nod to the work of speech-language pathologist Ana Paula Mumy) are worth making a daily part of your parenting efforts:

7. Make Use of Playful Tricks
When children are reluctant to speak the target language, you could also try these four tricks to stir motivation. The success of these tactics will naturally depend on the particular parent and child, but they’ve worked well for some families. Just be sure to pursue them with a playful spirit.

Again, at the heart of language acquisition and active use lie the two “core conditions” of exposure and need. To get a bilingual child using the minority language more actively, it is these two areas that should be mindfully considered and proactively addressed. Meanwhile, despite the frustrations we may feel over this situation, we must continue to pursue our efforts as patiently and playfully as we can.

In this post I’ve offered an overview of how to approach the pivotal challenge of advancing and activating a child’s ability in the minority language. For much, much more—since practically every aspect of my work is tied, in some way, to the fundamental aim of effectively addressing exposure and need in order to realize greater bilingual success—I encourage you to continue gathering ideas and inspiration by exploring this blog, my forum, and my book.

How about you? What are your thoughts or ideas regarding this important issue?

PrevPreviousGuest Post: Bilingualism Is a Way of Life
NextWhat the World Is Saying About My Book On Raising Bilingual ChildrenNext