5 Key Ways to Fortify Your Home Environment for Bilingual Success 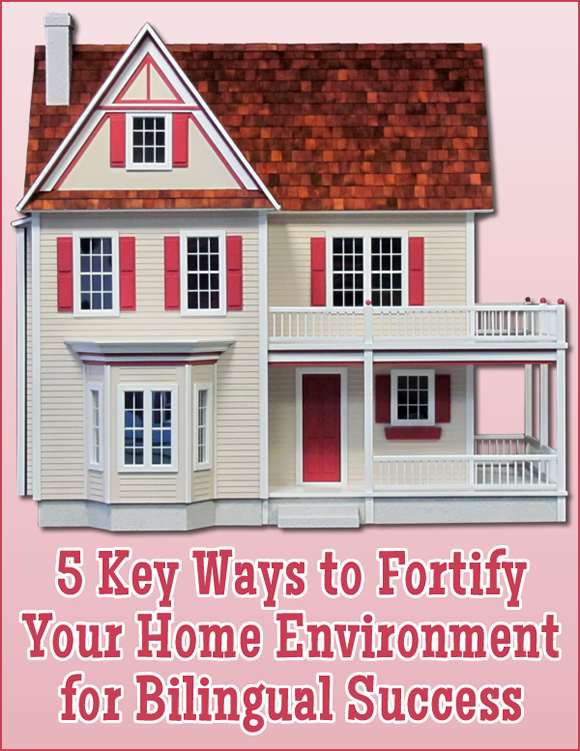 We live in Hiroshima, Japan and we continue to rent instead of trying to buy. (Not only are the homes here generally too expensive for what you get, their value actually declines so buying a home isn’t the same sort of investment that it might be in another country. For the time being, at least, I think the freedom and flexibility that comes with renting is a better option for us.)

We’ve been in this house for the past 11 years and, starting last year, I began getting itchy to move. Now that my kids are older—Lulu is 14 and Roy is 11—and our local junior high school is a 40-minute walk (no school buses and the students aren’t allowed to ride bicycles), I felt it was time to find a place that was closer to the school and would have enough space for them to finally have their own rooms. (This can be difficult because Japanese apartments and homes are typically quite small.)

And then, after my parents died in March and May, moving felt even more urgent because, beyond the practical reasons I just mentioned, there arose a deep need to renew my life and the best way to do that, I thought, was from the ground up.

But finding a suitable place in this part of Hiroshima—a popular area where the rents are high—was turning out to be a challenge. In fact, it seemed we might have to wait until next spring for more options to appear (spring, the start of the new school year and work year, is when people often move from one house to another).

But then, just a few weeks ago, I came across what looked like a really promising place and we pursued it quickly. Although it’s an older house, it’s in good shape, it’s reasonably spacious (the kids cheered loudly when we told them they can finally have their own rooms!), and it’s in an excellent location.

While the house we’ve lived in since Lulu was 3 and Roy was a baby has been a good place for their younger years, the house we’re moving to will be a better home for this next phase of our lives as a family.

Fortify your home for success

This move also has me thinking about how I can shape our new home environment to continue supporting the process of my children’s language development. At the same time, it’s also true that I no longer need to be quite as proactive about this because my kids are already older and their active ability in our minority language is now firmly established.

Still, I’ll surely do what I can to sustain the sort of actions that I made in this house over the past decade. And I strongly encourage you to stay mindful and proactive in similar ways when it comes to supporting the minority language in your own home.

One thing that parents tend to underestimate early on—and I did, too—is the fact that it takes a strong and ongoing commitment to keep suitable minority language resources flowing into the home over the years of childhood. After all, as children grow, their level of maturity, language ability, and interests will naturally evolve and thus we’re faced with the formidable task of finding and acquiring new resources that are appropriate and appealing at every stage of their changing development.

Believe me, this is far easier said than done, but the importance of suitable resources in the minority language must not be underestimated because books and other resources are what will largely drive ongoing engagement in this language on the part of both parent and child. As I stress in previous posts like Do You Really Have Enough Resources in the Minority Language?, you can never have “too many” resources in your target language, and in fact, the more resources you have, and the more suitable those resources are for each stage of the child’s development, the more likely it is that you’ll maximize engagement and progress in the minority language.

3. Shape (or reshape) the home environment to support your aim.

As you seek to emphasize the minority language in your home—particularly through the early formative years—and maintain a steady stream of suitable resources in this language, also consider how the environment itself can be used to enhance the process of language development.

Is your bookcase (preferably, bookcases) of children’s books in a prominent place that signifies the importance of literacy to your family and invites your children to handle them freely? (Of course, if your children are still small, you may want this free access to involve only board books, while keeping other books on a higher shelf until they’re a bit older.)

Do you make a point of regularly placing books that you think might appeal to your children in “child-friendly” locations around the house—without comment. I’ve pursued this sneaky tactic continuously over the years—placing books by their beds, on the couch, next to their favorite toys, etc.—and what I’ve found is that, attracted by the covers, they will often open them and begin reading.

How about your CD player or other music-playing device? Is it in a handy spot so you or your children can routinely play music in the minority language?

4. Make the most of the strategy I call “captive reading.”

As you pursue efforts to shape your home environment in productive ways, I strongly encourage you to establish and sustain the use of “captive reading.” Captive reading, in which suitable texts are posted in the bathroom or other “captive location” on an ongoing basis, is a highly effective strategy for fueling language and literacy development. If you want to maximize your children’s progress in the minority language, then captive reading should be a central part of your efforts over the whole length of childhood, starting at around age three.

I’ve written extensively about captive reading and its many variations at this blog and at my forum so let me point you to Challenge #4: Make Use of Captive Reading (at my forum) where you’ll find all the links on one handy page.

When you have a specific aim for your efforts—you want to use the minority language more consistently, you want to read aloud every day, you want to sustain a regular homework routine—it can be very helpful, very empowering, to post reminders of your intention in highly visible spots around the house. At the same time, I’m sure there are smartphone apps that could also strengthen your mindfulness and determination by serving frequent reminders of your aim.

Meanwhile, the world is full of inspiring quotes that can help lift your spirit and motivate your efforts. In fact, a few years ago I released an e-book that contains 636 quotes which were carefully selected with parents of bilingual and multilingual children in mind. These are quotes that I’ve often turned to myself—leafing through the pages, even posting my favorites on the wall above my desk—and they’ve definitely had a hand in boosting my own efforts and success.

This e-book is truly a “power of pack of wisdom” and it can now be downloaded for free. (A small donation to lend support to my work is suggested, but the choice is yours.) Just click this link to find the file…

[stextbox id=”comments”]How about you? In what ways could you fortify your home environment to help fuel your daily efforts and your children’s language development?[/stextbox]

PrevPreviousMake the Most of Your Precious Time with Grandparents, Whether Near or Far
NextSomething Strange Happened 2 Days After We Moved into Our New House (And Its Significance to Change and Transformation on the Bilingual Journey)Next