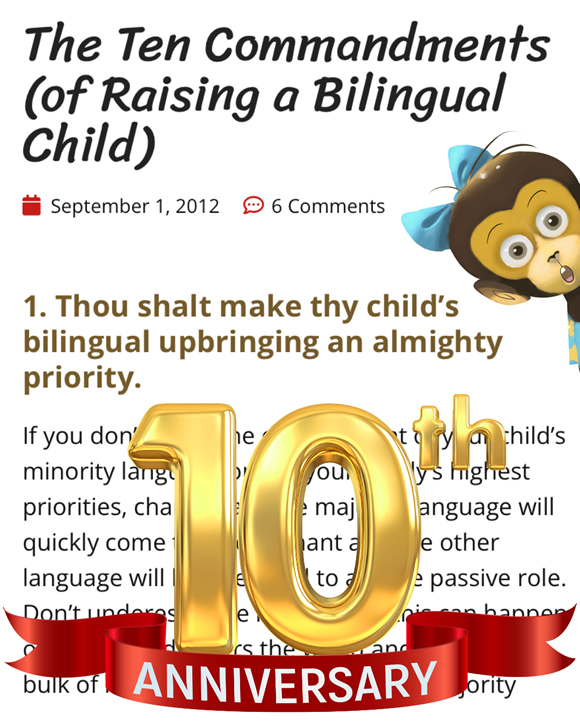 It was titled The Ten Commandments (of Raising a Bilingual Child). Here are three examples…

1. Thou shalt make thy child’s bilingual upbringing an almighty priority.

3. Thou shalt be mindful that each day’s efforts bear the fruit of thy child’s eventual bilingual ability.

10. Thou shalt give thy honest best to this endeavor, while giving thyself a break.

I don’t recall what appealed to me about this “commandments” idea when I wrote it. I probably thought it could be more amusing than it turned out to be. But it remains a good example of the fact that, for the past 10 years, I’ve simply made posts involving whatever form and content inspired me at the time.

(Through the years I’ve gotten literally thousands of requests to publish “sponsored posts”—an offer to pay me to publish advertising content disguised as an article, even on topics bizarrely unrelated to raising bilingual kids (such as pest control)—but I’ve rebuffed every one of them. I had no grand ambition when I began this blog, but I did want the content to be as authentic and as helpful as possible. I suppose I could have made some money by accepting “sponsored posts,” but at what cost to that original intention?)

New vision for a new decade

Over the past couple of years, as my kids have gotten older and the end of my own bilingual journey nears, I’ve become less active at this blog, at my forum, and on social media. Although I’ve continued writing books and consulting with parents, I began to wonder about the future of my work in this field. In fact, after recently turning 60 (oh my Buddha!), I even contemplated the idea of retiring and focusing on my fiction writing again.

However, the truth is that supporting parents to experience greater success and joy on their bilingual or multilingual journey with their kids has been deeply gratifying to me and I can’t imagine ending these efforts now. So, instead of retiring, I’ve actually decided to expand this support in a new and exciting way for the next decade. I won’t get into the details just yet, but I feel a fresh surge of enthusiasm for this new vision and I look forward to sharing it with you as it takes shape.

While there’s now much to do as I look ahead to the future, I’ll also take some time this month to reflect on the past 10 years and share some of my thoughts in a series of posts. This has been such an enriching decade for me, both professionally and personally, and I’ve been blessed to cross paths with so many good people out in the world. I’m truly grateful to everyone who has offered their interest and their support to my work over the years. I wish I could thank each one of you in person in every possible language.

How about you? Feel free to share any thoughts you might have on the past 10 years of Bilingual Monkeys.

PrevPreviousForget Fluency! Instead, Make This Your Goal When Raising Bilingual Kids.
NextThe Best (and Worst) of Blogging About Bilingual Kids for 10 Years (Part 1)Next